Home » Technology » Birde is an Australian-designed smart speaker for children

I guess every parent worries about how much time their kids spend in front of screens. Maybe kids worry about their parents being buried in their phones, but I digress. Parents fret not only about their kids getting fat or frying their brains, but also that if they start batting around all the options offered on the screen they’re holding they may — um — see something nasty in the woodshed.

This is the proposition around which the Australian-developed Birde pre-schooler entertainment system is based. It connects with the internet for the flexibility this offers, but kids cannot access the internet through it. So while a toddler can operate one of these, there’s no chance of encountering Donald Trump or the guy who shot Bambi’s mummy. Or advertising. 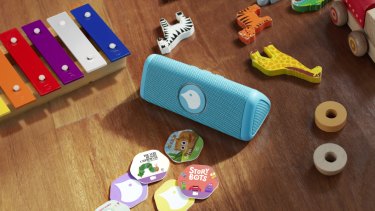 The $299 Birde is a speaker roughly the size of an extended drink can. It’s tough and waterproof, the controls are simple (on/off, volume up and down) and the battery has a play time of up to ten hours between charges. To get it going you choose programs contained on hexagonal chips called Birde Seeds. These include local content as well as overseas, both audio and video, all aimed at pre-schoolers. Seeds are a bit bigger than a 50-cent coin and kids simply tap them against the Birde symbol on the front of the player to get them rolling.

Meanwhile parents download an app that gives them remote control over the device as well as account set-up. There’s also a television app to stream video content through Wi-Fi to the telly, giving the kids pictures as well as sound.

Well, maybe. Right now it depends on which television or streaming device you have. I couldn’t find the television app for my current generation Apple TV, the website says iOS TV support is ‘coming soon’. So, no pictures at our place. The parental control app is available on iOS and Android. 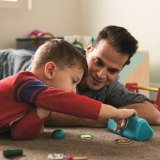 Kids tap their ‘seeds’ on the speaker to hear a particular program or track.

The seeds are available as spoken stories, music and video and each variety is colour coded. While some appear extensive the running time of each is not among the product details on the website. The Birde is supplied with six seeds that include Play School and The Wiggles, and a couple of these run for only around ten minutes before repeating. But one is a cat purring that goes on for, oh, forever. I guess it’s supposed to put your littlie to sleep. It was working just fine for me until the barnyard chooks came along. Seeds are available from $11.95 to $29.95.

The device itself is well made, nicely finished and washable. Most importantly it’s kid-proof. My two testing assistants, aged five and three, are pretty rough and it still looked good after a few days with them. It also sounds pretty good. There are only two colours, purple and blue, and it’s supplied with a charging tray that charges without a cord, but nowhere is there any indication of how much charge remains.

Because I’m a pedant I noted that the alphabet song on the Story Bots seed pronounces it ‘zee’ rather than ‘zed’, and the Big Brown Boogie Bear weighs 500 pounds, so you’ll need to explain to your little one that this is really 226.8 kilograms.

My assistants enjoyed tapping the seeds to change programs but without pictures they didn’t stick with them long. Your kids may be different, but at our place the Birde didn’t stand a chance against the three Capital Ps; Peppa Pig, Pocoyo and Paw Patrol.

Riverdale: What can you see the cast of Riverdale in next?