When Battle for Azeroth – World of Warcraft's latest major expansion – launches in August, the game will have been live for almost 14 years straight.

While this doesn't make it the longest-running MMORPG (the role-playing game sub-genre of the MMO, which stands for massively multiplayer online), it's the most popular and arguably the most well-known, and has held those mantles for a long time. 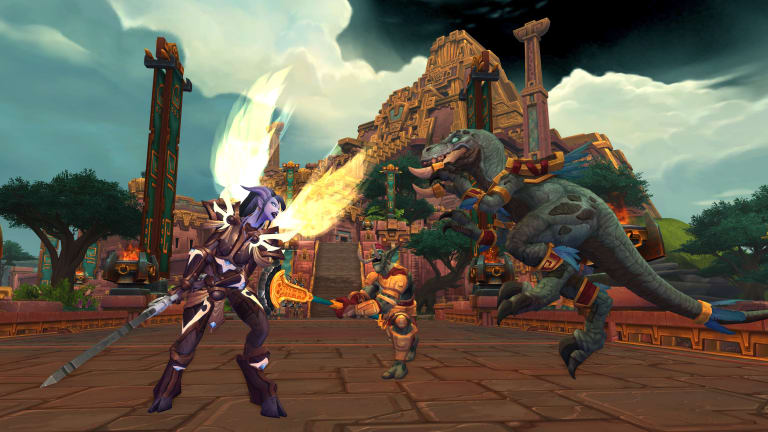 Though its subscriber count peaked in 2010 (with 12 million), the game continues to entertain millions and has reportedly grossed more than $US9 billion ($12 billion) for its developer, Blizzard. That the game has managed to hang on to enough players to keep it going, especially as it charges a monthly fee in an industry where free is increasingly the standard, is incredible.

The frequent release of new content, like the expansions (which also have to be bought separately) is part of the reason for the strong player retention. The game has also created a culture around it almost unlike any other.

Like many massively popular games, the WoW  fan base contains people from around the world and of all different ages and cultures. But unlike many popular games, there are many WoW fans for whom the game was a big part of their childhood or teenage years, and who are continuing to play into adulthood.

Nice day for a WoW wedding

A long-time WoW fan living in Sydney, Kim first signed up in 2008 at the behest of her friends and has been hooked ever since.

"I think my main character has about 380 days played on it," Kim says, adding that she's been told that figure, equating to more than 9000 hours, is "not that much in comparison to others".

But the game is especially personal for Kim, because it's also where she found the love of her life. The story of how she met her fiancee is romantic and somewhat familiar, except that it took place in Azeroth.

It happened after Kim joined a random group one afternoon, as they attempted to clear a raid.

"A warlock messaged me halfway through and said 'Hey, you're really good at this. Do you want to come to my heroic run this weekend?' We ran that for around a month or so before the next expansion came out and I lost contact," Kim says. 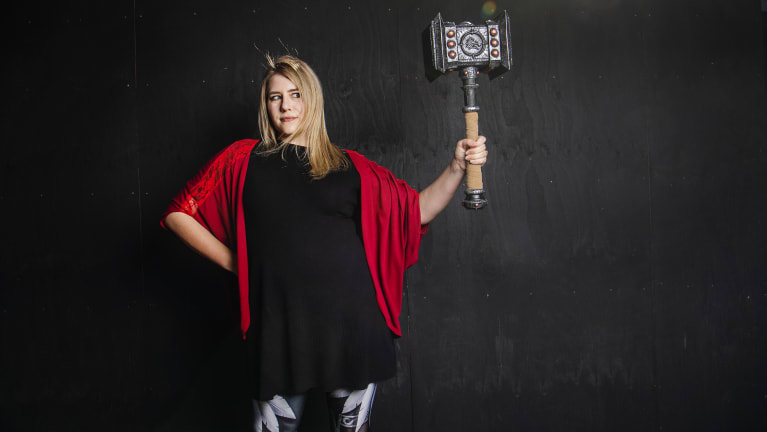 Ten years and around 9000 hours later, Kim keeps coming back.

"Two years later I'd come back to the game from a very brief break, had transferred to a completely different server, was minding my own business when a warlock messages me out of nowhere and he says 'Hey I think I know you. Did you play on this other server a couple of years ago?' And we just started talking and talking, and didn't stop."

Now 26 years old and working full-time, Kim can't manage the more than 60 hours a week she put in during her teenage years, but the game's still an important part of her life. In fact, she and her partner are currently planning a Warcraft-themed wedding.

"We wanted to make sure the wedding was about us. Why not put our origin story into our wedding?" she says.

Kim is concocting a poison-themed drinks menu (she primarily plays as a rogue), and is commissioning an artist to carve her and her partner's WoW characters into cake-toppers. The colour themes will be purple (for warlock) and green (for rogue).

Since most of the guest list are people the couple met on WoW, and since Kim's parents are "super nerdy", she's hoping it will be a theme everybody can appreciate. It might seem a bit strange to her extended family, she says, "but they can deal with it, it's our wedding".

J Allen Brack is executive producer on WoW, and has been part of the team since 2006, around a year after the game had launched. He says there's no way any of the developers could have predicted that they'd still be working on it in 2018.

"When you're working on something creative you really have no idea how it's going to be received," he says.

"It would have been absurd for anyone to think that we were going to celebrate the 10-year anniversary of World of Warcraft . And here we are; next year is going to be the 15th anniversary." 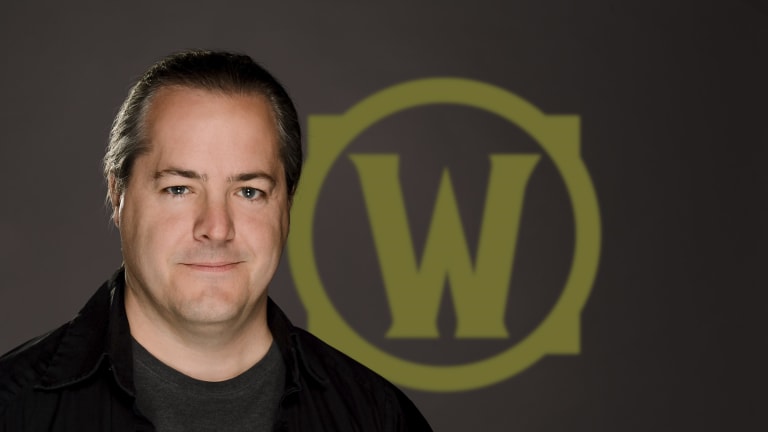 Blizzard’s J Allen Brack, executive producer on World of Warcraft, says his team did not foresee the game’s longevity.

Unusual as it is for someone in the games industry to be working on the same project for more than a decade, Brack says the "direct connection with the player base" keeps things interesting.

"You're playing the game one night, you find a problem, the next day you can solve that problem and have it fixed by the time you leave that day," he says.

"There's no shortage of things that [players] are very happy to tell us they're not happy with. And we can really react to that in a much more rapid way [than in offline games], which is very exciting."

Having previously worked on games including early MMO Star Wars Galaxies, Brack's job was initially to help build out WoW with new zones and expansions, but he soon found the team was committed to doing things a bit differently.

"The experience I had from my previous lives was that you had a 'live team' set up and doing ongoing content, and then you had an expansions team," he says. The expansions team would create entire new zones and big pieces of content to sell to players each year; at the same time the live team was managing fixes and minor updates.

"The [WoW] team was not excited about that as a model. The decision that we made early on then, and we still have it for today, is it's one team that does live content, and the same leaders and the same team are working on the expansion. 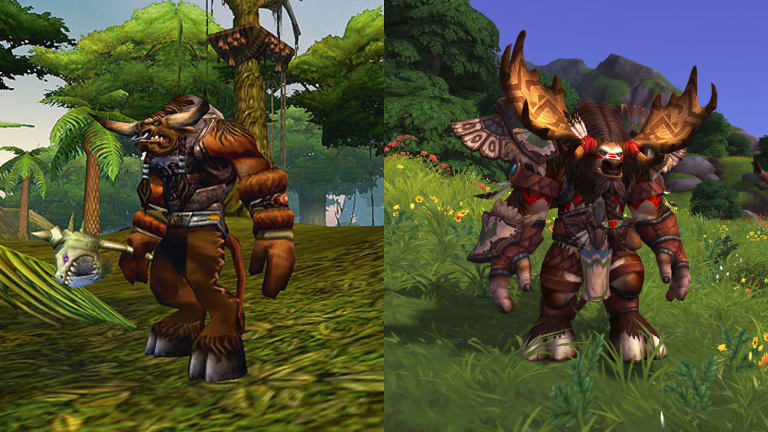 "The limitation of that structure is you give up speed," Brack says, noting that major expansions for WoW release every two years, and that there's a single set of leads who have to constantly switch contexts. "The benefit is that you get is a more consistent game. The people who are responsible for the lessons that they're learning in an expansion are also responsible for learning those lessons in patches, as the timeline progresses."

Losing control of the 'living' world

One of the most infamous examples of "lesson-learning" in WoW occurred early on in the game's life. An effect called "corrupted blood", which could be given to players by a certain enemy and was only supposed to affect players in a specific area, unexpectedly spread throughout the game like a plague.

People with the affliction infected other players nearby, and it was powerful enough to kill newer players instantly. As some of the game's 2 million players tried to escape to less-populated areas, some intentionally spread the virtual disease to others, and soon many of the game's cities and hubs one some servers were literally filled with corpses. 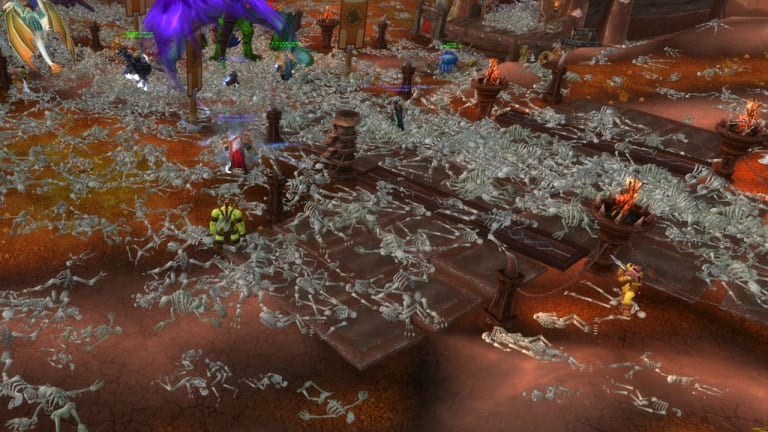 Carnage during the height of the corrupted blood plague.

Though the problem was eventually brought under control, Brack says it was an eye-opening insight into player psychology and directly inspired a later (this time intentional) game feature.

"We did a launch event for [2008 expansion] Wrath of the Lich King, where players could get infected and they could pass that infection on. If it wasn't cured, you'd become a zombie and you could kill other players," he says, recalling that he and the team were shocked at how quickly players would turn on their friends the second the game allowed it.

"It was this one four-day period that was just crazy. You could give the disease to someone else and go attack other players. It was really interesting to see the player psychology at work. I don't think we expected players to be so bloodthirsty."

Though limited time events are still very much a thing, Brack says the team has tried to scale them back in the years since Lich King, and that most of them are opt-in.

"We like the idea of the world changing in a somewhat meaningful way on a semi-regular basis, but the challenge with things like the zombie plague is that they can really do damage to how you want to experience the game," he says.

"We got a lot of complaints that weekend like 'I just want to play the game, I don't want to be a zombie, why are you ruining my fun?'"

In fact the diversity of players has been a massive strength for WoW, which offers varied activities from in-game leatherwork and item-selling to raiding with friends or diving deep into the narrative side of things. Brack says some people play the game as a lifestyle and maintain an active subscription at all times, but otherwise the player base tends to ebb and flow.

"We do see new players every single expansion … and we see people who come back for every expansion for some amount of time. They like to come in, experience the new world, get to max level and then they're off until the next expansion," he says.

While Brack says Azeroth will lure back lapsed fans with narratively important zones and "the best storytelling we've ever had", for Kim the appeal remains the same: it's all about sharing the fun with her friends, and particularly with her partner.

"He's in the military at the moment and we're hoping that he might be able to play every now and then as a way to feel like we're still doing things together," she says.

"When he's home he sits alongside me and we play together all the time. We raid together, we do dungeons together. Some people might thinks that's a bit odd, but that's what we enjoy doing."

Netflix Just Teased ‘Making A Murder’ Season 2 With The Best. Tweet. Ever.

Children In Need 2018: Viewers in tears as Doctor Who Jodie Whittaker organises set surprise for youngster with cystic fibrosis