Nic Wilkins started selling parts of his sneaker collection online two years ago as a way to make some extra cash in college. The hobby took off and this year, he expects to move 10,000 pairs of shoes. His anticipated take is a 25 percent profit from over $1 million in sales.

StockX is part of a burgeoning group of online marketplaces that have turned resales of sneakers into a kind of currency — and an increasingly big business. Other sites like GOAT Group, Stadium Goods and Bump, which also resell sneakers, streetwear and other goods, have raised more than $200 million in venture capital funding. On Wednesday, StockX said it had hired a new chief executive to expand its business and garnered a fresh $110 million in financing that values it at more than $1 billion.

The rise of these online marketplaces is now pushing sneaker retailers and brands to rethink the potential of resale sites — once deemed a quirky niche for enthusiasts — as serious distribution channels. In February, Foot Locker invested $100 million in GOAT Group and said the companies would “combine efforts across digital and physical retail platforms.” And the luxury site Farfetch acquired the LVMH-backed Stadium Goods for $250 million in December. 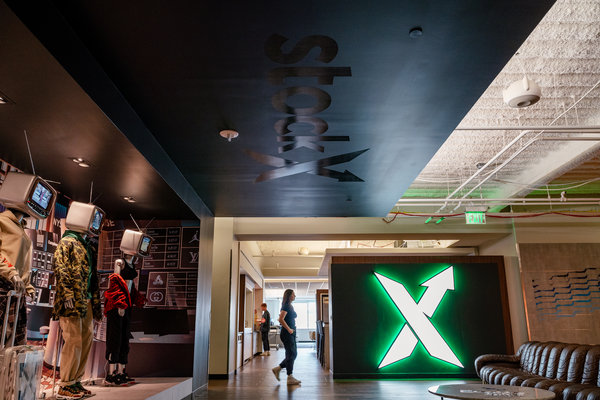 The fervor for sneakers has been fueled by “sneakerheads” and others who regard the shoes as investment assets. All told, the market for resale sneakers and streetwear in North America is projected to reach $6 billion by 2025 from $2 billion today, according to Cowen, an investment bank.

“The internet and eBay made reselling into a cottage industry,” said Matt Powell, an analyst at NPD Group. “Platforms like StockX made it into a business.”

For sneaker brands like Nike and Adidas, sites like StockX add a twist to the ecosystem around their most desired shoes, like Jordans and Yeezys. So far, the companies have taken a hands-off stance to the online marketplaces, with Nike’s chief financial officer saying in March that the company was not focused on reselling and had no partnership plans or business strategy for it.

But while the sneaker brands are not capturing any resale revenue, they benefit indirectly because that market generates buzz for them. So they carefully — and secretively — manage the supply of their hottest items, leading to wild spikes in resale prices, said John Kernan, a research analyst at Cowen.

Nike teased the resale market last November when it released a pair of $160 Jordan 1s that bore a message: Their tongues said “WEAR ME,” their toeboxes said “PLEASE CREASE,” and their midsoles said “NOT FOR RESALE.” In a few cases, shop owners required buyers to wear the shoes out of the store, a move that damaged their resale potential since most of the resale sites sell unworn sneakers. But the attention only fueled demand: The Jordan 1s immediately appeared on StockX and have sold for prices as high as $1,000.

Scott Cutler, the new chief executive of StockX, said more brands would eventually have to pay attention to resellers. “Nike, Adidas, Louis Vuitton, Gucci, Rolex, whatever it is, they’re certainly not ignoring marketplaces and are not naïve to the fact that their distribution channels are evolving,” he said.

StockX grew out of Campless, a website that Josh Luber, a former I.B.M. consultant, built in 2012 to track sneaker resale prices on eBay. After Mr. Luber delivered a popular TED Talk titled “Why sneakers are a great investment,” Dan Gilbert, owner of the Cleveland Cavaliers, and a co-founder, Greg Schwarz, acquired Campless.

Campless eventually transformed itself into StockX, a marketplace to buy and sell sneakers. From the beginning, it also positioned itself as a “stock market of things.”

On StockX, that played out with buyers bidding on items or purchasing them for the lowest asking price from sellers. Once a bid was accepted, sellers shipped their items to one of StockX’s four authentication centers, which makes sure the shoes are not fake brands and then sends them to the buyer. StockX makes money by charging sellers a transaction fee. The company said its revenue more than doubled in the last year, with gross product sales topping $100 million a month. It has expanded into streetwear and luxury goods like handbags and has more than 800 employees.

The site does not carry user profiles and ratings, but includes detailed sales and pricing history for each item, making it more like a stock market than eBay. In total, StockX has raised $160 million, with its newest investors including General Atlantic, DST Global and GGV Capital.

One customer has been Usman Hasib, a 32-year-old in Houston. A sneaker collector since he was 13, Mr. Hasib has used StockX to amass 56 pairs of shoes worth around $25,000, according to StockX’s “portfolio” tracker. He rarely sells his purchases.

“I try to wear a different one every day,” he said.

When Mr. Hasib recently was unable to score Nike’s Off-White Jordan 1 sneakers in retail stores, he paid around $1,050 for a pair on StockX. Prices later surged to nearly $3,000 on the site. “It literally is like playing a stock market,” he said.

Mr. Cutler, who previously worked at eBay, StubHub and the New York Stock Exchange, became an adviser to StockX in 2016. That was when he read about the company’s plans to create a Big Board for commerce and products, modeled after marketplaces like eBay and StubHub. So he decided to offer his help.

“I immediately reached out and said, ‘Interestingly enough, I am the one person on the Earth that knows all of those companies intimately well,’” he said.

He said StockX planned to use the new $110 million in capital to expand internationally and push into selling newly released products.

Mr. Luber, StockX’s founder, said he was stepping down as chief executive but would continue to be the company’s public face. In a phone call from Paris, where StockX was involved in Fashion Week, he said he now had an even bigger vision than dropping new Jordans on StockX: He wants to replace static retail prices — an “antiquated concept,” he said — with a stock market style of shopping. In this setup, shoppers place bids on new items and prices are determined entirely by supply and demand.

Mr. Luber said he recognized the concept might initially be a stretch. “To tell all these brands that our idea is to get rid of retail prices is crazy, but that’s the slow, big idea behind it,” he said.

StockX is already moving ahead with the notion. In January, it held an “I.P.O.” — that’s initial product offering — for a limited run of slide sandals created by Ben Baller, a celebrity jewelry designer. The company used a complicated Dutch auction to determine which bidders got to buy the sandals and at what price. It resulted in an average price of $210 a pair — three times as much as they would have cost at retail, but lower than the majority of the bids.

After the release, other brands inquired about similar deals. StockX now has half a dozen such releases in the works with other designers, Mr. Luber said. “It’s not going to be an overnight thing, but it is absolutely logical,” he said.

In the meantime, StockX is expanding further into secondhand sales of luxury goods such as handbags and watches, an area currently topped by The RealReal, a San Francisco start-up that plans to go public later this week.

Erin Griffith reports on technology start-ups and venture capital from the San Francisco bureau. Before joining The Times she was a senior writer at WIRED and Fortune. @eringriffith

What is the 'Stand with Sophie' viral video that’s trending?

Putin is ‘storing up favors’ with US medical supplies airlift, expert says but Trump dismisses warnings of Kremlin stunt – The Sun