The federal government is taking on anti-5G conspiracy theories and grassroots opposition to new telecommunications infrastructure, pledging $9 million over four years towards a public education campaign on the science of electromagnetic energy (EME).

Communications Minister Paul Fletcher said in a release announcing the program that, aside from getting the message out to the public, the money would go towards funding further research at the Australian Radiation Protection and Nuclear Safety Agency (ARPNSA). 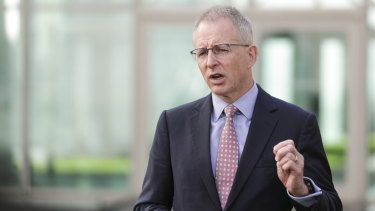 "The rigorous safety standards for mobile networks and devices in Australia draw on extensive scientific research into EME emissions, globally and in Australia, over many decades," he said.

"The enhanced EME program will make sure all Australians have access to clear, reliable and reputable information so they can take advantage of new technologies like 5G and feel empowered to do so safely."

Fears over the health impacts of 5G have been growing steadily online and in parts of the community, despite extensive scientific evidence showing the equipment is safer for humans than most baby monitors and emits levels of energy orders of magnitude below minimum safety standards.

Opponents of the technology have even called for a halt to the national rollout or the blocking of specific infrastructure, often repeating untruths including that 5G is untested, exceeds existing safety standards or can cause damage to cells in the human body.

The spread of anti-vaxxer-style beliefs about the supposed dangers of 5G are clearly a worry both for the government and for telcos, who are currently planning to expand the network — and therefore install new towers — in communities around the country.

Such beliefs can typically be found on fringe websites, online videos and social media, and there has been evidence of a concerted Russian propaganda campaign to sow suspicion and fear of 5G in the West.

In March, ARPNSA published a blog post detailing how 5G technology works and where it fits within the existing safety standards, stating that it was the opinion of the body – as well as of the World Health Organisation and others – that there was no established scientific evidence to support any adverse health effects.

However, the government agency was prompted to publish another post in June after it noted increasing misinformation about health effects, ARPNSA's role and 5G or radio waves generally.

"We urge you to be cautious of claims from anti-5G campaigns. These campaigns are generating unfounded fear and concern within the community," it said.

"ARPANSA and the World Health Organisation are not aware of any well-conducted scientific investigations where health symptoms were confirmed as a result of radio wave exposure in the everyday environment."

How Much Does Becca’s Engagement Ring Cost? The Design Has Over 80 Diamonds Total