Home » Technology » Chromecast with Google TV review: catching up with Amazon and Roku (but not overtaking) 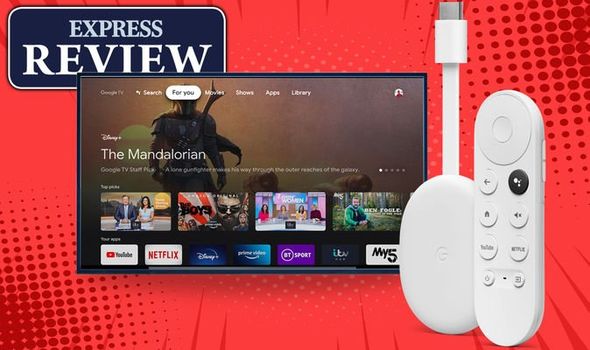 When Google launched the Chromecast back in 2013, it was revolutionary. It was compact and had an impulse-buy price tag, but was still capable of beaming video, photos and games from your smartphone or tablet onto the biggest screen in your home. Unsurprisingly, it was a colossal hit for Google.

But in the years since its launch, Chromecast has fallen behind its rivals. Sure, Chromecast Ultra enabled streaming in Ultra HD from the same pocket-sized puck, but Amazon and Roku offered HDMI dongles that shipped with remote controls capable of changing the volume on your TV, finding shows with voice commands, and pausing the action without the need to rummage around the back of the sofa to find your smartphone.

Enter Chromecast with Google TV. This rebooted streaming dongle is designed to catch-up with the competition and reinstate Chromecast as the go-to gadget when it comes to watching streaming services, queueing up YouTube videos on the big screen, and more.

So, has Google done enough? Express.co.uk has been hard at work bingeing boxsets on Netflix, Prime Video and catching up with must-see shows on iPlayer, All4 and ITV Hub to test that out. Read our in-depth review to see whether it’s worth the upgrade…

Google announced the Chromecast with Google TV back in September. It’s now on-sale at £59.99 from a number of retailers, including the Google Store, John Lewis, Argos, and others. However, Google seems to be the only retailer with the full array of colours, including Snow (white), Sunrise (a pastel orange), and Sky (baby blue). 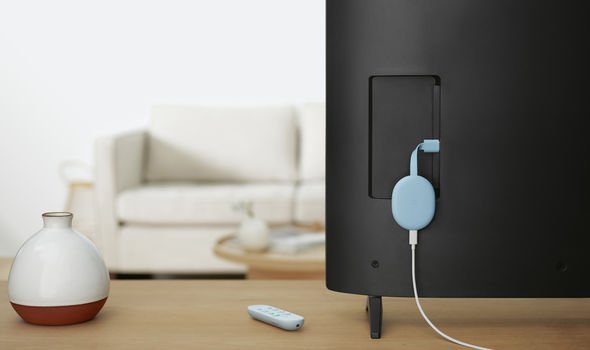 The new Chromecast boasts a similar design to its predecessors. It’s a svelte Hockey Puck-like shape with a built-in HDMI cable at one end, and a USB-C port for the power cable at the other. The shape is a little more elongated than the Chromecast Ultra, but it’s recognisable as a Chromecast.

There’s no doubt the colourful new Chromecast will be one of the most aesthetically pleasing devices hanging from a port at the back of your TV… but depending on the layout of your living room, you’re unlikely to be able to appreciate that design very often.

If your TV has a spare USB port, you can plug the bundled charging cable into that, or if not, Google includes a wall adapter for the USB cable to power the Chromecast. There’s a small blinking light on the Chromecast to show that everything is on and working.

Google has repositioned this dot to the centre of the dongle, which is much more convenient if you need to quickly check everything is working. On previous models, where it was hidden next to the charging port.

But let’s be honest, this time around, the most important aspect of design is the remote control. A first for the Chromecast line of streaming gadgets, this remote control allows viewers to skip episodes, pause, summon the Google Assistant, adjust the volume, power on your telly and even switch between HDMI inputs. 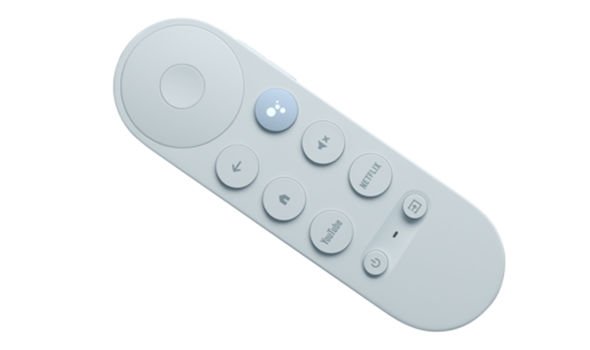 The remote is on the small side, but that’s not necessarily a bad thing. It fits pretty snugly into your hand and ensures all the buttons are well within reach. Thankfully, Google has stuck with tried-and-tested clicky buttons on its remote — so you won’t have to deal with a dodgy touch-sensitive panel, like the twitchy one found on the Apple TV remote or the first-generation remote that shipped with Sky Q, when you want to watch a show.

Google lets you programme the remote to your set-up, so that it can switch between inputs, turn the TV on and off, or control the volume from your sound system. This all works well enough and means you don’t have to juggle remotes to land on the right HDMI input, or hunt down the back of the sofa when something is suddenly DEAFENINGLY LOUD.

Chromecast with Google TV has a dedicated shortcut for Netflix, which makes sense as it’s pretty much the default streaming service for most people these days, and YouTube, which also makes sense as this is a Google product… nevertheless, we can’t help thinking this button would’ve been better served as a Disney+ or Prime Video shortcut.

Let’s be honest, there’s little point in praising the delightful remote design and sleek hardware if there’s nothing to watch. Thankfully, Chromecast with Google TV comes packed with access to hours of telly, movies and games to keep you busy during lockdown – and well beyond.

As you’d expect, there are a few exceptions — there’s no dedicated All 4 available on the streaming dongle right now, for example. Luckily, the success of Google’s previous Chromecast gadgets means there is usually a workaround to fix these issue. For example, the All 4 app on iOS and Android can beam shows to any Chromecast, so it’s pretty simple to get your favourites onto the big screen… although, you won’t be able to use that snazzy new remote as you’ll have to reach for your phone whenever it comes to picking an episode.

Apple TV+ isn’t anywhere to be found on the new Chromecast with Google TV and neither is NOW TV. That’s a bit of a shame. Whether these omissions will be resolved as more developers roll out apps with support for the new Chromecast kit remains to be seen.

As it stands, those looking for a comprehensive list of every streaming service you’d ever want to stream should pick-up a similarly priced streaming gadget from Roku.

The new Chromecast marks the first outing for the new Google TV experience. This is the new menu that Chromecast owners will have to navigate to find their favourite shows and movies (unless they’re Cast-ing from their phones and tablets, of course).

First things first, it looks great. Like, really good. Google has managed to catch-up rivals like Apple and Amazon in one fell swoop. Gorgeous rich artwork for the latest shows that Google recommends to you fills the top of your screen, with shortcuts to jump back into the shows you’re already bingeing found below alongside a row of small app icons to jump to a particular streaming service. It all works really well. 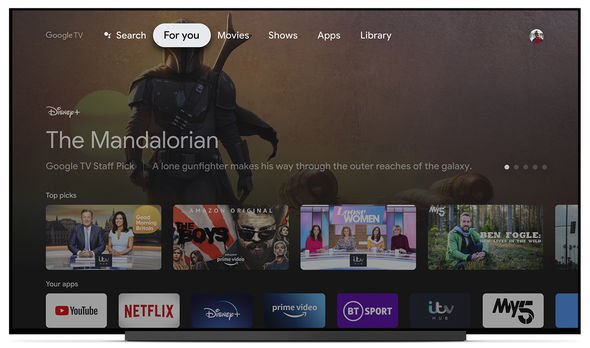 Not every streaming service found on the new Chromecast has been updated to deeply integrate with Google TV. For example, shows you’re watching on Netflix will appear on the homescreen with a small progress bar to denote how far you got through the episode. Tapping on the episode resumes playback, without the need to launch the streaming app, search for the series and resume the episode. But bafflingly, Prime Video series never appear in the same Currently Watching menu.

Google TV incorporates Rotten Tomatoes scores for all movies and shows. For our money, that’s much more useful than the IMDB score that’s used throughout the rival Amazon Fire TV gadgets, which seems to average everything from Academy Award winners to bargain bin mediocrity at around a 6 or 7 – making it tough to compare two films before movie night.

If you rely on Google search to keep tabs on the latest shows and movies coming out, it might be worth plumping for the Chromecast with Google TV over its rivals. That’s because Google has added a new shortcut on all search results for new boxsets and films that lets you add a title to your Watchlist, which will then appear on your Chromecast menu. 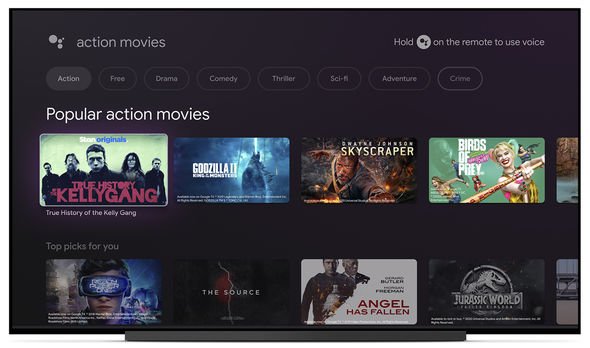 So, you can add a film that’s piqued your interest from your work computer during a lunch hour search, only to be notified when it’s available to watch from your Chromecast menu. Not only that, but if the title is available from a number of different streaming services or stores, Google will let you compare prices from the main menu, before picking one. So, you’ll never have to pay to rent a title that’s also included in your Prime subscription, for example.

And lastly, the new Chromecast with Google TV includes the AI-powered Google Assistant. This is the same chatty helper found in the Nest Mini and Android smartphones. Google Assistant is easily the smartest smart assistant on the market right now. Whether you’re looking for the opening times for your local cinema, finding out about the conditions on the road for an upcoming journey, delays on your commute, or new movies from a favourite director – speaking into the remote control will surface all of the answers.

If you’ve got a few smart light bulbs, plugs, or a thermostat set-up with the Google Home app, you’ll be able to control all of these using your remote control too. So, you can dim the lights, crank up the heating, and launch a favourite boxset without moving from the sofa. 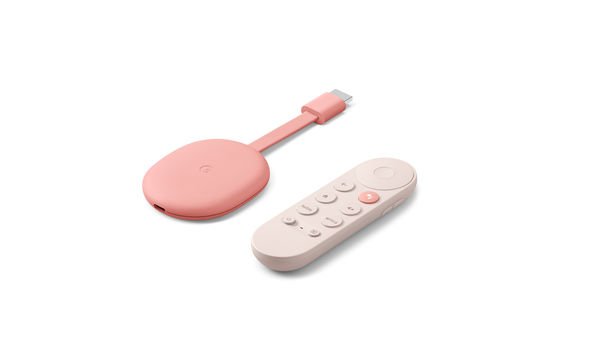 Google had a lot of catching up to do with its new Chromecast. The gorgeous artwork-filled menus found on Amazon Fire TV, smart recommendations from across streaming services found on Apple TV, and simple remote control available with all Roku devices all made the menu-free, smartphone-controlled Chromecast look like a relic in comparison.

Thankfully, Chromecast with Google TV more than catches-up with the competition. The smart recommendations based on viewing history work well, the menu looks gorgeous, and the new remote feels great in the hand and even handles HDMI inputs and volume controls.

And unlike the competition, you still get all of the features that made the Chromecast such a runaway hit in the first place, like beaming photos to the big screen from your phone, broadcasting a tab from your Chrome web browser, or queueing up music videos from YouTube – with friends on iOS and Android able to contribute to the playlist too.

The Google Assistant is still whip-smart and adds a load of smart home capabilities to this diddy telly dongle. Those who store their family snaps in Google Photos can set a rolling slideshow of favourite photos as a screensaver, which is a nice touch.

Sure, there are no missing streaming services, like All 4. But unless you’re buying a Roku, that is a compromise you’ll have to face with other set-top boxes too. But hopefully, developers are already hard at work to solve these omissions.

Chromecast with Google TV is a triumph. And a worthy upgrade for anyone with a previous Chromecast model plugged into their telly, especially as we all gear-up for more weeks locked down inside bingeing our favourite shows.

Everything Ariana Grande and Pete Davidson Have Said About Their Split

What Do BTS Members Call Each Other?