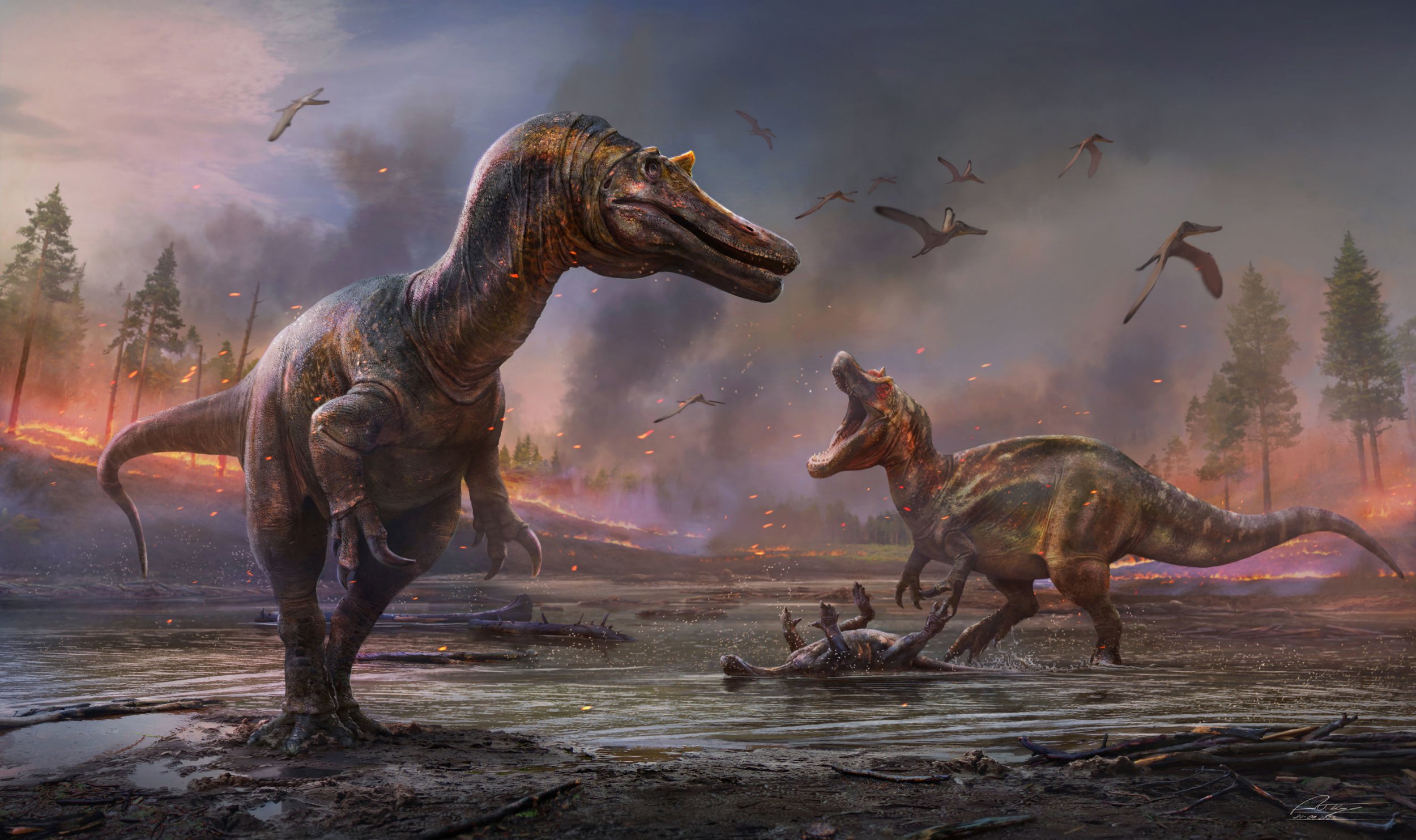 Two new species of dinosaur that may have once roamed what is now the Isle of Wight 125 million years ago have been discovered.

The two carnivorous reptiles are thought to have been nine metres long (29.5ft) – about the same length as a Stegosaurus – with skulls like crocodiles.

One has been described as a ‘hell heron’, with scientists describing its hunting style like a fearsome version of the modern day bird.

One expert hailed the discovery of the two specimens in quick succession as a ‘huge surprise’, but said palaeontologists had suspected for decades that the remains of such dinosaurs could be found on the island.

The haul of bones was discovered on the beach near Brighstone over a period of several years, and scientists now say they relate to two new species of spinosaurid, a group of predatory theropod dinosaurs closely related to the giant Spinosaurus.

In all, more than 50 bones from the site have been uncovered from rocks that form part of the Wessex Formation, laid down more than 125 million years ago during the Early Cretaceous period.

Dr Neil J Gostling of the University of Southampton, who supervised the project, said: ‘This work has brought together universities, the Dinosaur Isle museum and the public to reveal these amazing dinosaurs and the incredibly diverse ecology of the south coast of England 125 million years ago.’

The only spinosaurid skeleton previously unearthed in the UK belonged to Baryonyx, which was initially discovered in 1983 in a quarry in Surrey.

Most other finds since have been restricted to isolated teeth and single bones. Analysis of the Isle of Wight bones carried out at the University of Southampton and published in Scientific Reports suggested they belonged to species of dinosaurs previously unknown to science.

Chris Barker, a PhD student at the University of Southampton and lead author of the study, said: ‘We found the skulls to differ not only from Baryonyx, but also one another, suggesting the UK housed a greater diversity of spinosaurids than previously thought.’

Co-author Darren Naish, an expert in British theropod dinosaurs, said the discovery of spinosaurid dinosaurs on the Isle of Wight was a long time coming.

‘We’ve known for a couple of decades now that Baryonyx-like dinosaurs awaited discovered on the Isle of Wight, but finding the remains of two such animals in close succession was a huge surprise.’

The first specimen has been named Ceratosuchops inferodios, which translates as the ‘horned crocodile-faced hell heron’.

With a series of low horns and bumps ornamenting the brow region, the name also refers to the predator’s likely hunting style, which would be similar to that of a heron.

Herons famously catch aquatic prey around the margins of waterways, but their diet is far more flexible than is generally appreciated, and can include terrestrial prey too.

The second was named Riparovenator milnerae, which translates as ‘Milner’s riverbank hunter’, in honour of esteemed British palaeontologist Angela Milner, who died recently.

Dr Milner had previously studied and named Baryonyx – a major palaeontological event whose discovery substantially improved our understanding of these distinctive predators.

The Early Cretaceous rocks on the Isle of Wight describe an ancient floodplain environment bathed in a Mediterranean-like climate.

Whilst generally balmy, forest fires occasionally ravaged the landscape, and the remains of burnt wood can be seen throughout the cliffs today.

With a large river and other bodies of water attracting dinosaurs and housing various fish, sharks and crocodiles, the habitat will have provided the newly discovered spinosaurids with plenty of hunting opportunities.

The new fossils will go on display at Dinosaur Isle Museum at Sandown on the Isle of Wight.

Why Does Serac Want Delos? ‘Westworld’ Fans Have A Major Theory

Four zookeepers self-isolate at wildlife park to look after animals