Malmesbury in the UK is known for many reasons – the first king of England is buried there, it looks like the setting of a Midsomer Murders spinoff series, and it's the home of Dyson's elaborate R&D facility where they busy themselves developing new gadgets to style hair with. It’s the latter that I visited in 2019 to witness the unveilling of Corrale – the first wireless hair straightener with flexing plates, designed to change how people straighten their hair.

Corrale had been in the pipeline for seven years, with work starting on it around the same time as AirWrap, Dyson’s other curling/straightening product. The difference between the two is that AirWrap is for wet hair, while Corrale is for dry.

The biggest problem with traditional hair straighteners is that one end of the hair in the device gets too hot while the other doesn’t get hot enough, according to one of the engineers at the factory. Hence users have to squeeze too hard to achieve even coverage, which burns and stresses hair, leaving it straight but irreparably damaged. Not to mention the extra time required to achieve a desired style. 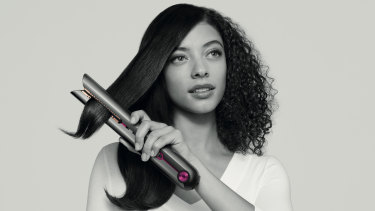 Dyson’s Corrale will be available towards the end of April, 2020.

During Corrale's development, engineers used hundreds of different hair samples to discover what styling techniques cause the least damage. The team concluded that it’s important to strike the right balance between heat and force. While styling hair when cold is better for its health, straightening requires at least 300g of force, which causes damages. Hot hair only needs 150g of force to straighten, but most people apply much more because they're used to less efficient hair irons. Current straighteners typically operate at around 232 degrees Celcuis, whereas Corrale has three settings – 165, 185 and 210 degrees.

Corrale’s flexing plates are made from a manganese copper alloy with 15 micro-hinged segments, with the thinnest parts even skinnier than a human hair. The engineers determined that 65 microns (plus a very thin coating) is the goldilocks zone for bend-able but not breakable. In comparison, a human hair is about 90 microns. The flexilibity of the plates means contact is made evenly across hair, reducing flyaway strands.

During the tour of the facility, an engineer in the Advanced Manufacturing Lab said batteries are the future for Dyson. While that doesn’t mean all upcoming products will be battery operated, a lot of money and research is being invested into getting them right, which is unexpected for a company primarily known for moving air.

Dyson products are famous for being extremely expensive, and at $699 Corrale is no exception. The company helps justify the price by its extensive testing procedure – the design has been put through tests to simulate two 30-minute styling sessions a day for five years, with the plates bent more than 450,000 times, the unit dropped from a height of 2 metres 485 times, the battery pack dropped from 2.1 metres eight times and 220 kilograms placed on a single point of the battery pack.

It will be interesting to see how the gadget fares on release in April, given that $700 could buy 10 decent hair straighteners already on the market with some money left over for a couple of hair treatments. But the brand power of Dyson is strong, and its new products always draw attention.

The author travelled to the UK as a guest of Dyson.

Instagram update adds hidden feature fans have wanted for years: here’s how to find it

Coronavirus outbreak could have big impact on iPhone production