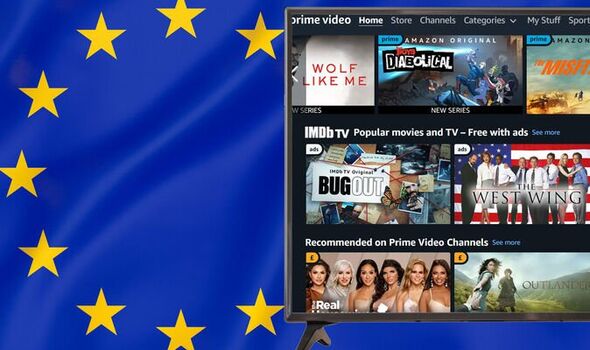 Amazon last year announced plans to acquire iconic Hollywood studio MGM for $8.45billion. MGM are the studio behind the beloved James Bond series as well as plenty of other blockbuster series, such as the Rocky franchise and Ben Hur. In total, MGM has a library of almost 4,000 films and nearly 17,000 TV shows which could be added to Prime Video in future.

With any huge deal like this, regulatory approval is needed – and now the Amazon acquisition of MGM has moved a step closer. As Deadline reported, the EU has given unconditional antitrust approval for the Amazon MGM deal.

This is a huge hurdle Amazon needed to overcome, with the next one being whether the US’s Federal Trade Commission (FTC) will challenge the merger or not.

Speaking about the news coming out of the EU, an Amazon spokesperson hailed the decision, and said it looked forward to providing even more choice for Prime Video subscribers.

A representative for Amazon said: “We’re pleased with the Commission’s decision and, with MGM, look forward to providing more choice of quality entertainment for viewers”.

It’s been reported that the FTC in the next few weeks will decide whether to challenge the Amazon MGM merger or not, so the retail giant should find out soon enough if it’s got the all clear for the deal or if it will face some serious stumbling blocks.

If Amazon gets the all-clear for the deal, it could mean thousands of hours of extra content will be heading to Prime Video that subscribers would otherwise have to pay for.

Besides giving extra value of money to the service, this could help entice even more subscribers over. That’s something market leader Netflix is likely concerned about, especially as it’s experiencing slower than anticipated growth – admitting that increased competition is playing a factor in this.

Netflix is the most popular streaming service in the world, with the Squid Game makers ending 2021 with 221.8million members. This fell well of its targets with Netflix also anticipating lower than expected growth in the first quarter of 2022.

Netflix only expects to add 2.5million new subscribers in the first three months of 2022, which is half of what analysts had predicted. Explaining why growth was not what was expected to shareholders, Netflix said increased competition in the streaming space had played a factor.

The streaming giant said: “While this added competition may be affecting our marginal growth some, we continue to grow in every country and region in which these new streaming alternatives have launched.”

Amazon’s Prime Video streaming services boasts Premier League matches, the US Open, and rugby internationals as well as hundreds of Hollywood blockbusters like No Time to Die, The Green Knight, and more. Exclusive shows, like The Boys, Clarkson’s Farm, The Grand Tour, and Transparent, to name a few. Everything is available in up to 4K Ultra HD at no extra cost!

‘You are kidnapping me!’: Anti-mask activist busted in Florida bagel shop