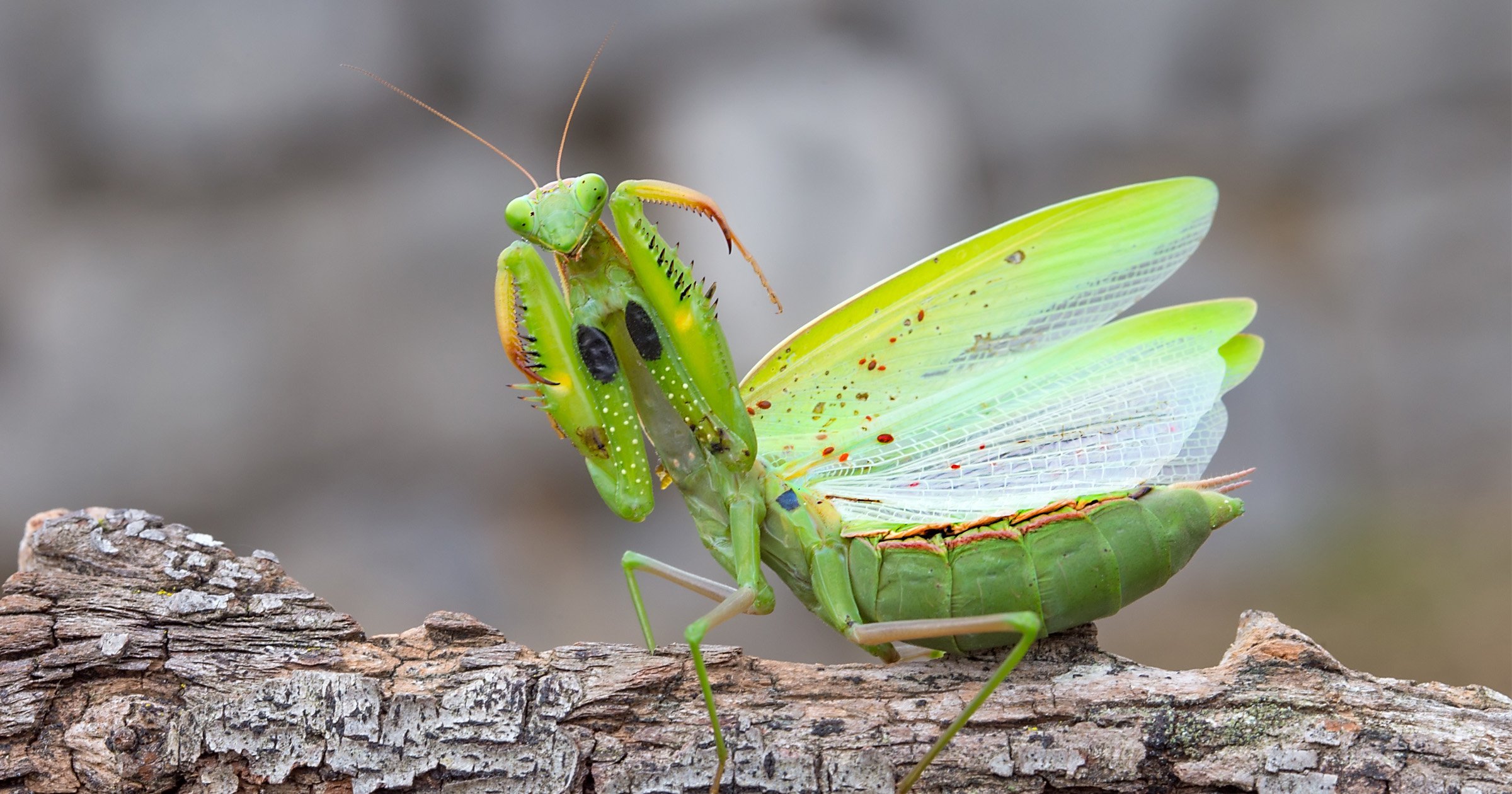 A European praying mantis was caught in Stratford-upon-Avon as the carnivorous insects show signs of establishing a foothold in the UK.

The voracious predators are extremely rare, but this summer a find was made in Warwickshire and they have been reported breeding outdoors for the first time.

The adolescent male was discovered in August, before it had developed wings, and was looked after in tropical conditions at Stratford Butterfly Farm until it reached the end of its season.

The specimen was found at Bordon Hill Nurseries, which produces wholesale ornamental plants, and looked after in tropical conditions a few miles away at the popular visitor attraction.

Named after the long legs it uses to capture and impale prey, the pale green European mantis can feast on a wide variety of other species.

The female can also bite the male’s head off during mating before completing the breeding process with the still-functioning, dismembered body.

Named Clare after one of the visitor attraction’s workers, the captured mantis went on public display in the MiniBeast Metropolis before reaching the end of its lifespan in November.

Jane Kendrick, marketing manager at Stratford Butterfly Farm said: ‘We were delighted to have rehomed this gorgeous European praying mantis back in October.

‘It probably had quite a journey as they are not native to the UK. Unfortunately they don’t live very long and it passed away a few weeks ago.’

While it’s not known how the mantis came to end up in the plant centre, the find comes in a year that has also seen the first known successful outdoor reproduction.

He was contacted by the garden’s owner this year after the householder spotted a nymph, the name for a young mantis.

British Wildlife magazine reported: ‘Richard returned to the site and, after a search, found a two-inch long nymph. This appears to be the first record of successful breeding in the wild for this species in Britain.’

Dr Björn Beckmann, from the Biological Records Centre at the Centre for Ecology & Hydrology in Edinburgh, told Metro.co.uk that there were many reasons for mantis sightings in the UK. Dr Beckmann explained: ‘We have indeed had occasional records of the European mantis.

‘Praying mantises including this species are sometimes kept as pets, and the occasional sightings in Britain, especially when found in urban areas, are generally most likely to be either escapes from such captivity, or accidental introductions with imported plants.

‘The species lays eggs in a kind of cocoon called an “ootheca”, which is attached to plants and easily transported with them. The adults die off in late autumn and the eggs survive the winter in the ootheca and hatch the following spring or early summer.’

However Dr Beckmann, who also belongs to the Grasshoppers and Related Insects Recording Scheme, acknowledges that warmer weather may be making the UK more attractive to the insects.

Dr Beckmann said: ‘It was always assumed that the climate in Britain was too cold and wet for the European mantis to breed outdoors, but with the climate changing, conditions have probably become more suitable, and there was a first record of successful outdoor reproduction this year.’

Recordings of genuine, free-flying mantises still remain vanishingly rare, with one having been observed in a field in Hampshire in October 2015.

Gary Palmer, who discovered the male, gave the following account: ‘I was puzzled by the strange flight of what appeared to be a large insect some 40 metres away, flying at head height in large circles above the meadow.

‘Realising straight away that it was not something that I recognized I ran towards it.

‘As I drew nearer it suddenly folded its wings and dropped into the long grass before me. Astonished at what I had found, I managed to carefully catch it in my hands.’

Dr Beckmann does not discount that the record – only the second of a free-flying, potentially migrant mantis in England – could be the result of an escape from captive stock.

But sightings on the coast far from houses give recordings weight in that they lean towards mantises having made the hop across the Channel.

The species has already populated the wild in France as far north as Normandy and there were a spate of discoveries in Jersey last year.

The insect is thought to be marching northwards across Europe and, with climate change, it is surely only a matter of time before it establishes a foothold in the UK.

The mantis is an invertebrate with the scientific name ‘mantis religiosa’.

The average lifespan in the wild is one year.

The female mantis is heavier and larger than the male, reaching a maximum length of around 9cm compared to the male’s 7cm.

They can turn their triangular heads, fixed on long necks, 180 degrees to scan their surroundings.

They hunt by using their front legs to snare prey, using lightning-quick reflexes after stalking or springing ambushes.

Their long forelegs also have spikes for pinioning prey.

At rest, the insect has an upright stance and holds its forelegs forwards as if praying, giving the mantis its name.

Added to this, several resident species of crickets and grasshoppers are currently expanding their ranges northwards in Britain, and four new continental cricket species have arrived in Britain since 2000.

‘In addition to escapes from captivity and introductions with plants, there is a remote possibility that individual insects could fly across the Channel with a favourable wind, especially the males, which are much smaller and lighter than the females and clearly fly very well,’ Dr Beckmann said.

‘The females are much heavier and do not fly nearly as well, so a successful colonisation would presumably still depend on accidental introduction.

‘These are interesting times for the species.’

The recording scheme gathers sightings of grasshoppers, crickets and related species to aid their study and conservation. You can log sightings here or using the iRecord app.