Congratulations fellow millennials, we're old now! Unfortunately that also means it's probably our turn to host Christmas this year in our tiny, tiny kitchens. But never fear, the wonders of modern technology mean we don't need as many appliances to get the same result as our parents did, and we can probably do it faster and more efficiently. Here are four kitchen gadgets that will help make things run smoothly. 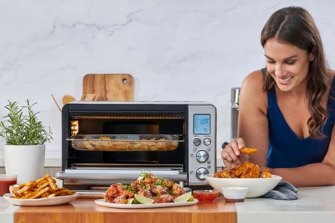 If you live somewhere without an oven that's in good working order, and can't or don't want to pay to replace it, this is such a great option. Especially if you don't normally need to cook for a lot of people at once and might need to move it to your next rental.

This gadget, which is just a bit bigger than a large microwave, bakes, grills, roasts, slow cooks, reheats, toasts and air frys. It even has a special mode for crumpets. It can fit enough food for six people, and unlike most air fryers it can actually turn a potato into chips you want to eat, in just 19 minutes.

It can perfectly roast a chicken, and cook a 33cm pizza. Not ideal if you have to feed more than six people, but if you want a multitasking wizard you can take with you, this is the oven you need. 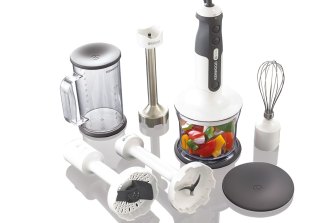 A 1000W motor and range of attachments makes Kenwood’s Triblade a versatile tool.

Chances are you don't actually need a whole, standalone blender or food processor. They're expensive, take up a stupid amount of bench space, and you're not actually going to make smoothies every day no matter what you said after watching that doco.

This handy hand blender whisks, blends, chops, mashes and souperises, before being taken apart and easily fitting in a drawer. It's great for making baby food or lazily chopping vegetables when you have a million other things to do, mashes a lot of potatoes without tiring you out, whisks the ideal meringue and makes perfect, smooth soups. 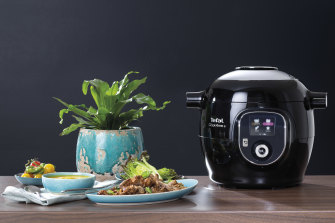 Tefal’s Cook4Me+ has more than 150 recipes built in, with more available via its app.

Your mum/aunt's pressure cookers can be terrifying. They're probably those old-style ones that you see on the news being used as part of a bomb. The Cook4Me+ is different, because it automatically releases its own pressure at the end of the cooking cycle, thus reducing your chances of screwing it up. It also has 150 recipes built in and connects to an app, so you can tell it what ingredients you have, and it might suggest what you can cook, then it tells you step by step how to make it on the Cook4Me+'s screen.

People love pressure cookers because they make food faster; like a brisket in one hour instead of six, or a whole risotto in six minutes with no stirring. Great for a last-minute dish, or for when you have to make lots of different dishes with limited time and space. Plus, it's actually a multicooker. So while pressure is the star of the show, it can also steam, simmer, brown, reheat and keep warm, and the steamer basket and pot are both dishwasher safe, making it a versatile appliance to have in the cupboard. 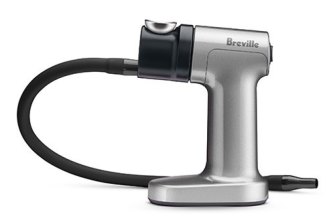 Breville’s smoking gun lets you infuse food and drink with applewood or hickory smoke flavour without the smokehouse.

Admittedly this gadget is nowhere near as useful as the others on the list. But one of the things about growing up at a time of unaffordable housing, in a generation that is less likely to own their homes than their parents, is that most of us don't have anywhere to put a barbeque. Like, sure I could put one in my tiny apartment, but then we'd all die of carbon monoxide poisoning. (Then again, that might still be less awkward than having the whole family converse around the table).

Anyway, if you want that smokey barbeque flavour without the massive barbeque, this is the thing you need. Just shove some nice woodchips in it, light them on fire, put the hose near the food under some kind of airtight covering (make sure it's far away from the smoke alarm) and boom! Delicious smokey food from a device that fits in a drawer. It's also a great way to make cheap fish, meat, salt and cheese from the supermarket taste five times fancier.