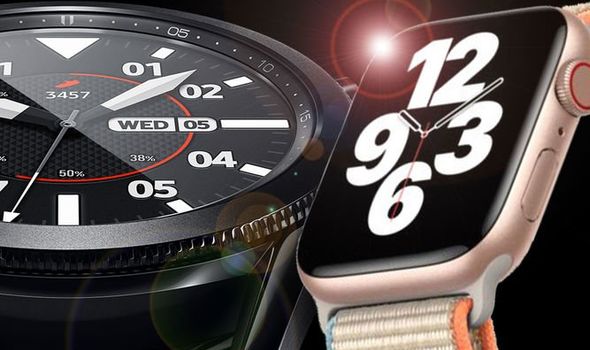 Samsung’s Galaxy Watch has seen some huge improvements over the past few weeks with a blockbuster upgrade now allowing these wearables to take a heart-tracing ECG and even monitor blood pressure. Those blood pressure readings are something that Apple Watch owners can only dream with this important health feature still nowhere to be seen on Apple’s wearable.

However, despite those big software updates and some all-new new Galaxy Watch devices launching late last year, Samsung’s wearable devices still lag behind when it comes to sheer popularity.

New stats from Counterpoint research have just revealed the best selling tech timepieces in the world and it seems Apple is way out in front. During 2020, the US tech firm took a whopping 33 percent of the market which is up 19 percent on the previous year.

In second place was Huawei with 11 percent, followed by Samsung with a 9.1 percent share of the overall market – that’s actually a fall of one percent over the firm’s 2019 sales.

Apple’s impressive sales stats were helped by big sales of its Watch SE and Series 6 which launched in the last part of 2020.

The SE included a swathe of health and fitness features at a much lower price and the Series 6 brought Oxygen level readings to these wearables for the first time along with new colours and a brighter Retina screen.

Speaking about the stats, Counterpoint Senior Analyst Sujeong Lim said, “Price band dynamics during Q4 2020 indicate ASPs (average selling prices) are on the rise. 2019’s biggest segment ($101-$200) shrank by 7%pts, while the more premium $300-plus segments grew by 8%pts, helped tremendously by Apple, which enjoyed a dominant market share of over 70% in this category. Apple’s success with its Watch SE model will likely spur others like Samsung to release similar variants, moving closer to the mass market. Over a three to four years timeframe, we see budget players like OPPO and realme gaining a significant share, intensifying overall competition and bringing down the prices.”

It could certainly be a big year for wearables. OnePlus is rumoured to be launching its first smartwatch in 2021 and with the company confirming a March event we might hear more news on that very soon. There’s also speculation that Samsung could reveal a new Galaxy Watch sometime soon that will ditch its current Tizen operating system and go back to Google power.

Finally, we can expect a new Apple Watch to arrive in the autumn with some reports suggesting this next-gen devce will be able to monitor blood sugar levels to help the fight against diabetes.

It’s going to be an interesting six months so watch this space!