Google has announced a $1 billion investment in Australia over five years, including a new research hub, increased cloud capacity and partnerships with local organisations including the CSIRO.

The tech giant’s Digital Future Initiative, its largest investment in Australia to date, is expected to support more than 6000 new direct jobs and more than existing 28,000 jobs in Australia. 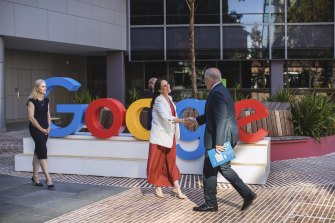 “We believe a strong digital future is one where everyone has access to technology and the skills to use it; where the internet economy fulfils its immense potential,” Mr Pichai said.

“Australia can help lead the world’s next wave of innovation, harnessing technology to improve lives, create jobs, and make progress.”

Prime Minister Scott Morrison said Google’s investment was a vote of confidence in his government’s Digital Economy Strategy, and would have a ripple effect across the economy.

“Entrepreneurship is what solves the world’s biggest problems. Not taxes and regulations. We have to embrace and encourage and enable those seeking these new digital opportunities,” Mr Morrison said.

“Today’s announcement by Google demonstrates that we are taking the right approach, and it recognises the digital leadership that is necessary for Australia to emerge as a top digital economy by 2030.”

“CSIRO’s science makes life better for every Australian, and when amplified by Google’s technology it will catalyse collaborative projects across our entire national innovation system, driving opportunity for businesses of all sizes across every market.”