But this year, with the Pixel 6, the company’s built a device with brains and brawn. With all new camera hardware, a custom processor for more capable on-device (rather than cloud-based) AI capabilities and a fun, confident aesthetic in both build and software, these machines measure up to Apple’s 2021 iPhones in almost every way while coming in significantly cheaper. 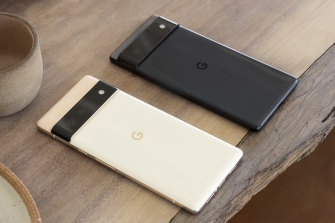 The Pixel 6 Pro (left) and standard Pixel 6 are practically the same size, but the former packs a much larger display.

The standard Pixel 6 is bigger, prettier, more powerful and has far superior cameras compared to last year’s Pixel 5, but sticks to the same price of $999. It also has a bigger, smoother display than the equivalent iPhone 13, takes nicer pictures in many scenarios and comes in at $350 less.

I really like the Pixel 6’s unusual glossy two-tone body, broken up by a chunky horizontal camera bar. It has a completely flat 6.1-inch display and a satiny frame that looks great with Google’s new botanical wallpaper themes.

Meanwhile the $1299 Pixel 6 Pro (which is $400 or $550 less than the iPhone depending on whether you compare it to the 13 Pro or 13 Pro Max), is essentially the same physical size as the regular Pixel 6, but with smaller bezels and a curved design that allows for a bigger 6.7-inch display. It looks a bit ritzier, but maybe not quite as fun, with a thin polished metal frame.

Both phones are powered by Google’s own Tensor processor, have beautiful AMOLED screens with fast refresh rates (90Hz on Pixel 6 and up to 120Hz on the Pro), IP68 waterproofing, 30W fast charging and 128GB of storage. They have enough grunt to handle any game or app I threw at them, excellent (but not industry-leading) battery life, and they also both support 5G, with the Pro being the first Australian phone to support the mmWave variety (not that it’ll be much good to you right now).

Photography has always been a strength of Google’s phones, but refreshed hardware means they’re once again at the very top at the pile with Pixel 6. There’s a new 50MP main shooter with a large sensor, plus a 12MP ultrawide, with the Pro adding a periscope telephoto at 3x optical zoom. Shots are always sharp and well exposed, low light photos and selective blur for portraits are both the best you can get anywhere, and video — which was previously a weak spot — is slick, stable and perfectly clear at Full HD or 4K.

New on the Pixel 6 are motion photo modes “action pan” and “long exposure”, which will blur parts of the picture while keeping others perfectly in focus, which can have a very dramatic effect.

The selfie camera, which lives in a hole punch rather than a notch, is also very capable this time and can utilise any of the tools the rear shooters can. The Pro gets a slightly nicer unit, able to handle ultrawide selfies and 4K video.

Google’s AI is generally running unseen in the background, but anytime I fed the Pixel a tricky photo (say a 10x digital zoom with a lot of detail, or a low light image of a person with dark skin), the Pixel exceeded expectations. I also love how logical and accessible the various modes and options are in the Pixel’s camera app, rather than relying on “pro” modes or hidden menus.

With the Tensor ship enabling greater AI capabilities in real time, photos also get a few new tricks you can apply after the fact. “Magic eraser” can wipe objects or people from your shots, intelligently filling in the blank space so it appears they were never there. It works great with people in the background messing up your composition and, while there are sometimes artefacts left where the people used to be, you wouldn’t notice unless you knew to look for it. 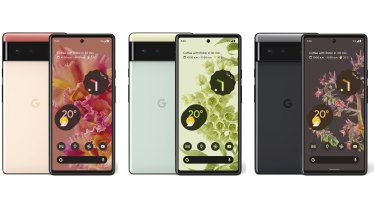 The Pixel 6’s bold look works well with software that can dynamically change the colour of widgets, icons and other UI elements.

There’s also “Face unblur”, which can analyse a pic of your fast-moving kid and restore a sharp image of their face. It doesn’t work every time, but it is impressive. And since all my shots are backed up on Google Photos, I can apply either of these new tools (or add portrait blur, or denoise, or any of a raft of AI processes) to photos I took a decade ago with non-Pixel phones.

And AI capabilities, of course, extend to the rest of the phone. Using your voice to type is faster and far more accurate here than on any other phone I’ve used, while Pixel 6 also supports translating incoming and outgoing text messages (in various apps) on the fly so you can converse more naturally with foreign friends. Smart services like app suggestions, an enhanced At a Glance widget and the Google Assistant are customisable to be exactly as present as you’d like, which is ideal.

Obviously the Pixel 6 will be most helpful for people deep in the Google ecosystem. I like that Google Pay cards and Google Home smart devices are accessible directly from the phone’s lockscreen for example. And the company’s own apps can be set so their icons change along with your custom palette choices, which can make for a very slick or very uneven home screen depending on how many of your favourite services come from Google.

Android 12 itself represents a bit of a facelift to make things bubblier and more accessible, but also hides some serious improvements like new controls to lock down apps’ access to your camera and microphone, smarter auto-rotate, better search bar. And while Google’s automatic colour customisation for widgets and UI might seem like a silly addition, it works with the hardware design and extremely smooth animation of the displays to make for much more pleasant and cohesive navigation than most Androids.