Home » Technology » Hands on with Apple's new Macs and iPads

For the first time in recent memory, Apple has held an event full of surprises. Sure, we all expected the iPad Pro to receive an update, and there were rumours of new Macs coming, but no specifics leaked. No supply chain photographs, no product names popping up in iOS firmware. The famously secretive company managed to keep its secrets.

Stealing the show were the two new bezel-free iPad Pro models. The smaller of the two fits an 11-inch display into the footprint of the previous 10.5 inch Pro. The 12.9-inch iPad Pro maintains that screen size, in a much smaller body. The 12.9 feels too big for me, but graphic artists will love it; and it's now light enough that it doesn’t feel too heavy to hold one handed. In fact, both feel much lighter in the hand, and much thinner, especially when paired with the less cumbersome Smart Keyboard. Still, the sweet spot feels like the 11-inch.

The screens are gorgeous, with P3 colour gamut and Apple using the same “Liquid Retina” terminology as on the iPhone XR. Like previous iPad Pros, they include a high-response rate Apple calls ProMotion, so iOS glides under your fingers, while drawing on the pencil is perfectly responsive. Long story short, they’re inheriting all the best bits from previous iPhone and iPad models. 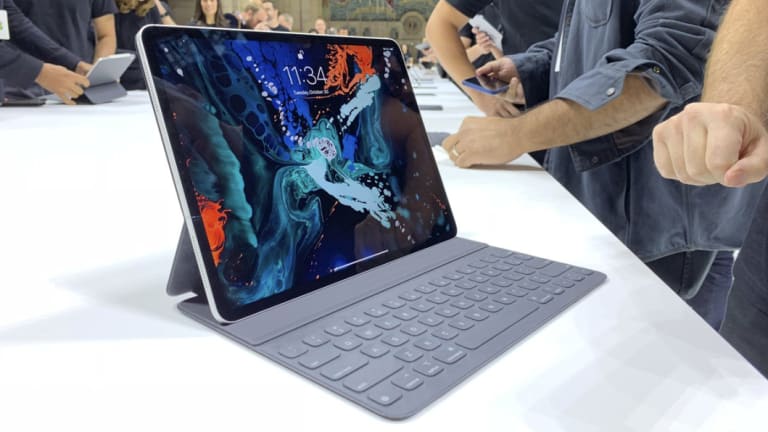 Apple’s Smart Keyboard has a few welcome improvements, with the connectors now on the back of the iPad, and less folds in the overall design. This gives a sturdier feel, both in use and when folded against the iPad as a case, making the keyboard finally feel as necessary a companion to the iPad Pro as the Type Cover is to a Microsoft Surface. And the Smart Keyboard now has a “desktop viewing angle”, which gives the iPad a much better laptop experience on a table.

The new Apple Pencil has one flat edge that snaps in place to the top of the iPad, with the same satisfying magnetic click that AirPods owners will recognise. That flat edge makes the Pencil less prone to roll off a table, while also providing a surface to wirelessly charge via the top of the iPad. Finally, you’ll never need to stick your Pencil into the Lightning connector to charge; surely the most mocked design choice in Apple’s recent history. 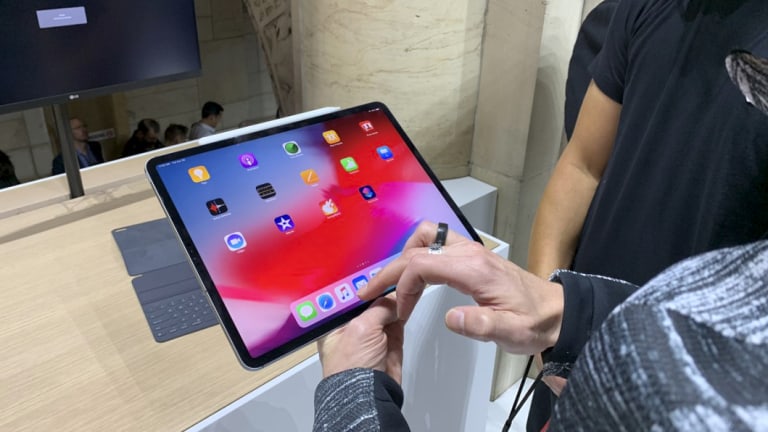 The iPads are big, but light enough to use one handed.

Apple has thankfully moved to USB-C on the iPad, which not only provides faster connectivity and charging but allows for more uses. In one demo, I edited some video in iMovie on the iPad Pro, with the timeline on the iPad Screen and the footage showing on an external monitor. In another, I was able to quickly ingest footage from a DSLR. Hopefully updates to iOS 12 will open up this USB port to even more workflows.

Introducing the new MacBook Air, Apple CEO Tim Cook described the machine as the “the most beloved notebook ever”. Bizarre, then, that Apple totally abandoned the thing following its last update back in 2015. Every other laptop maker released Air-inspired designs — borrowing the same wedge shape but improving the screen and speakers — while Apple moved on to the more expensive Macbook and MacBook Pro. 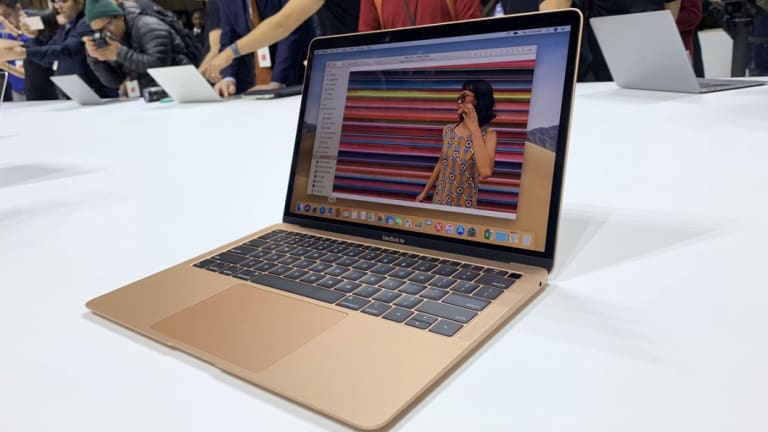 The new MacBook Air sits between the lowest-end MacBook Pro and the 12-inch MacBook, but seems set to replace both.Credit:Peter Wells

The new Air features a Retina screen with 4 million pixels and a dynamic display with “up to 48 per cent more colours” than the previous model. It will be interesting to properly compare it to the Dell XPS 13 and Apple’s own MacBook Pro — which have the best displays in the business — but it looked fantastic during my brief hands on.

The screen has a smaller bezel — again I can’t wait to compare it to the Dell — but Apple is keeping the camera at the top of the screen, so your video calls will not be taken from the most unflattering up-the-nose angle. And finally, you can now buy an awesome Mac Laptop without a Touch Bar, while still getting the convenience and security of Touch ID. 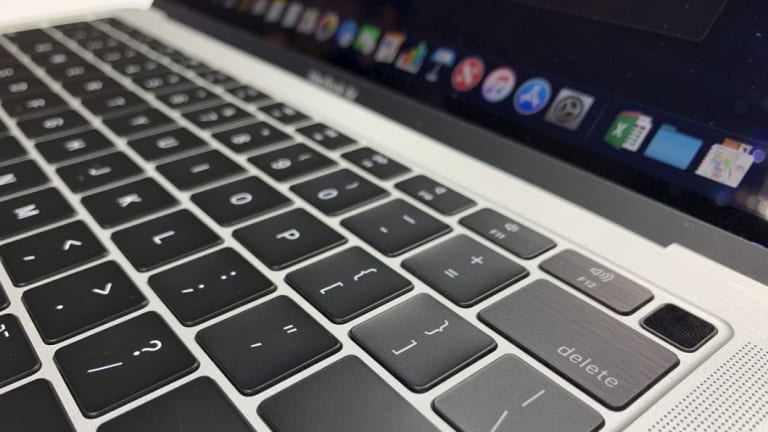 The T2 Chip enhances the security of the MacBook, while passing off high-end video tasks to the lower-powered board. That allows Apple to boast the Air getting 13 hours video playback; as long as those videos are encoded in HEVC. Obviously I couldn’t test that today, but the video playback was fantastic, thanks to that improved display and the much louder speakers on board. It turns the Air into a great little media playback machine, “perfect for the dorm room”, as Apple said, in case anyone was wondering who the target market is.

The Mac Mini hadn’t seen an update since October 2014. So dead was the Mini, it was the butt of jokes in Mac circles, the prediction you would make before an event just for laughs. But the Mac Mini is back and more powerful than ever. It's the same size as ever, so it can easily replace an aging Mini in rack-mounts and other enterprise hardware installations, now comes with desktop class processors and RAM that will make it capable of video and audio editing.

But I predict the majority of Minis will serve a more modest role, either as an entry level hot desk in corporate environments, a Computer Lab Mac in education, as a PC switcher’s first Mac, or as a geek’s media centre. But it’s nice to know the Mini has power if you need it. 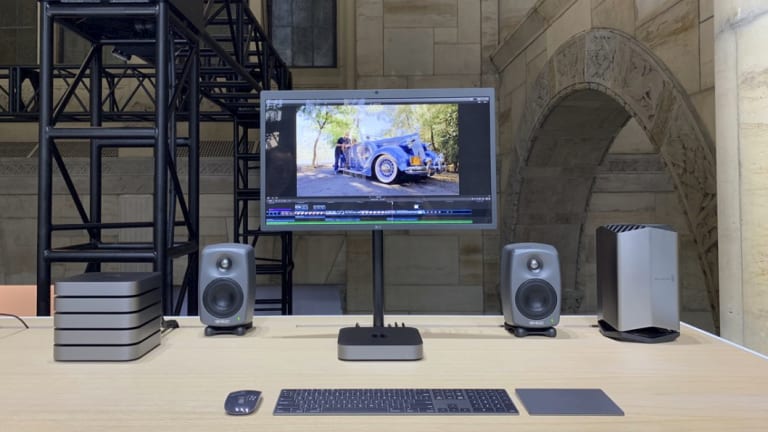 The tiny, stackable Mac Mini finally has some guts.Credit:Peter Wells

As has become a trend with recent Apple events, the only sticking point here is price. If you look at these new models in US dollars, I would argue the iPad Pros are actually bargains for those that will use them to their full potential. The responsiveness of the screen and pencil, and the fact that “real Photoshop” is finally coming to the iPad Pro, should make Surface owners take notice and Wacom shareholders a little nervous. The MacBook Air gets a modest price bump over the model it replaces, but is so much better that it’s worth the price.

But back home, the exchange rate maths have not been kind to Australian buyers. Here the iPad Pro starts at $1229, the MacBook Air $1849. But then Dell’s XPS 13 is similarly expensive, starting at $1784, with different trade-offs on display and SSD size. And in New York this morning, I spent the equivelent of $7.52 on tepid black liquid described by an American as “coffee”, so perhaps this is just our burden to bear.

Under Tim Cook’s Apple, old products never seem to die, but given the new announcements maybe some of them should. Why anyone would buy a 13-inch MacBook Pro without Touch Bar over the new Air is beyond me; it’s $50 more expensive, without the benefit of Touch ID, and with last year's processor. You’re also getting the second generation keyboard, which is far less comfortable.

The company’s other tiny laptop — confusingly just called “MacBook” — seems equally out of place. Its only benefit, it’s seems, is that it could fit in one of those iconic Manila envelopes that first introduced the Air. It’s even smaller and lighter than the Air, but it’s far less powerful and only has one port. Apple clearly resurrected the Air because it’s a much-loved model with a powerful brand, I wish they’d just committed and made it the definitive entry level laptop.

If you removed both devices from the Apple Store, the company's laptop line becomes as simple to recommend as it once was, as Apple’s other products are. I should be able to confidently write “the MacBook Air is the laptop most people should buy, the Pro if you need the power”. Just as the iPhone XR is the best choice for most iPhone users, but there's also the XS. The iPad is more than enough for most tablet users, but you can step up to the Pro. And the Mac Mini is great for first-time Mac buyers, but there's heaps above it too. They’re all premium products, just some are more premium than others.

The author travelled to New York as a guest of Apple.

'Godzilla vs. Kong': Why King Kong Gets More Screen Time Than Godzilla

Facebook's Oversight Board plans to launch just before U.S. election