Emerson Animal Hospital was down to its last 10 milliliters of ivermectin.

For months, the veterinary center in West Point, Miss., had watched its supplies of the drug dwindle. Dr. Karen Emerson, the veterinarian who owns the hospital, started the year with one 500-milliliter bottle of ivermectin, which she uses to kill parasites in dogs, chickens and other patients. But as the bottle emptied and her staff tried to find more, they were able to obtain only a 50-milliliter vial. Everyone else told them: None available.

So Dr. Emerson began rationing the medicine to give to snakes and other exotic animals for which she had no other deworming treatment. She told dog owners to pay for a more available replacement drug that can cost seven times as much.

Dr. Emerson was surprised by ivermectin’s scarcity because it had always been plentiful. But she put two and two together after people started streaming into her clinic to ask about using the drug to treat Covid-19.

“I really think that’s why we have a shortage, because so many people are using it,” she said.

For more than a year, misinformation that ivermectin is effective at treating or preventing the coronavirus has run rampant across social media, podcasts and talk radio. Even as the Food and Drug Administration has said the drug is not approved to cure Covid and has warned people against taking it, media personalities who have cast doubt on coronavirus vaccines, such as the podcaster Joe Rogan, have promoted ivermectin for that very purpose.

The inaccuracies have led to some people overdosing on certain formulations of the drug, which has then stretched doctors and hospitals. But at the very tail end of the misinformation trail are people, like Dr. Emerson, who regularly use the medicine for the animal treatments that it was approved for. 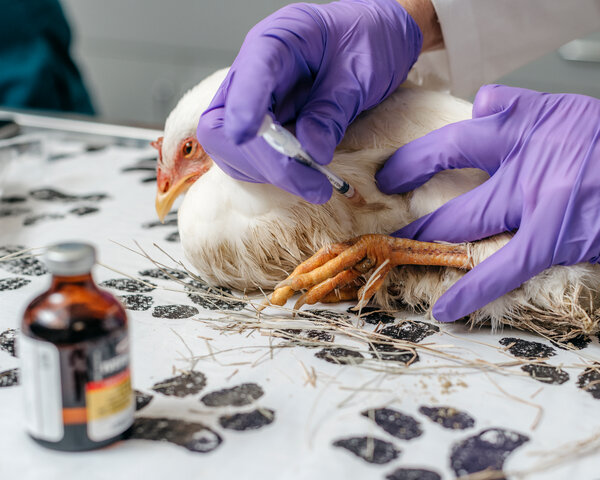 While certain versions of ivermectin can treat head lice and other ailments in people, other formulations — which come in forms such as liquid and paste — are common across the equine and livestock industries as ways to get rid of worms and parasites. People are increasingly trying to obtain those animal products to ward off or battle the coronavirus, farmers, ranchers and suppliers said.

The demand has strained the equine and livestock world. Jeffers, a national retailer of animal supplies, recently raised the price of ivermectin paste to $6.99 a tube from $2.99. Overwhelmed by orders, one farm supply store in Las Vegas started selling the medicine only to customers who could prove they had a horse. In California, a rancher was told the backlog of orders was so large that she was 600th in line for the next batch.

The dearth has led some farm owners, ranchers and veterinarians to switch to generic or more expensive alternatives for their animals. Others have turned to expired ivermectin or quietly stockpiled the drug when they could. Many were alarmed.

“I’m pretty worried,” said Marc Filion, the owner of Keegan-Filion Farm in Walterboro, S.C., which uses the drug for his 400 pigs and 25 cattle. If he couldn’t treat his pigs with the medicine when they were 5 weeks old, he said, they could develop diarrhea and might need to be killed.

These experiences underscore the real-world effects of misinformation and how far the fallout can spread, said Kolina Koltai, a researcher at the University of Washington who studies online conspiracy theories.

“It doesn’t just affect the communities that believe in misinformation,” she said. “This is something that’s affecting even people who don’t have a stake in the vaccine — it’s affecting horses.”

Last month, prescriptions for human formulations of ivermectin jumped to more than 88,000 a week, up from a prepandemic baseline of 3,600, according to the Centers for Disease Control and Prevention. Data on people buying animal ivermectin was not available.

In a statement, the F.D.A. said it had not received reports of ivermectin shortages but “recognizes that access to animal ivermectin is important for ranchers, farmers and horse owners to maintain herd and animal health.”

The agency posted on Twitter last month that people should not use the drug for Covid, writing: “Seriously, y’all. Stop it.”

Misinformation about ivermectin as a potential Covid cure began proliferating just weeks after the pandemic hit. In April 2020, scientists at Monash University in Melbourne, Australia, published preliminary findings showing that the medicine, when used in a lab setting, could kill the coronavirus within 48 hours. Monash University cautioned that the results were early and that the research was continuing.

“Do NOT self-medicate with Ivermectin and do NOT use Ivermectin intended for animals,” it said on its website.

A week later, the F.D.A. issued a warning against using the animal formulations for Covid. No matter. The findings spread rapidly online, fed by other studies that showed beneficial effects from the drug in coronavirus patients. At least one study has been retracted.

Inaccurate information has since flourished on social media sites such as Reddit and Facebook. In one Facebook group, Ivermectin Covid-19 Testimonials, 4,200 members swap advice on what side effects to expect from taking the drug and how to calculate dosages of paste meant for horses. The discussions are often echoed on podcasts and elsewhere.

“Ivermectin paste do you take orally or rub into skin?” read one recent post in the Facebook group.

“Put it on a cracker with a dab of peanut butter on same cracker,” a commenter responded.

Facebook said it removed content on potential ivermectin transactions, as well as any claims that the drug is a guaranteed cure. Reddit said it encouraged open discussion as long as the discussions did not violate its policies.

As the medicine’s popularity increased, some veterinarians prepared for a shortage. Last year, Dr. Juliana Sorem, a veterinarian at WildCare, an urban research center in San Rafael, Calif., that treats injured wildlife, bought two years’ supply of the drug. Her director told her to act as soon as they heard that people were using it against Covid.

“We were trying to be proactive,” Dr. Sorem said. WildCare now has six precious bottles stored away.

Understand Vaccine and Mask Mandates in the U.S.

Barbra Streisand Still Hasn’t Seen ‘A Star Is Born’ in Full, But Here’s What She Thinks the Parts She Has Seen…

2.7 million New Yorkers may have been exposed to coronavirus, study finds