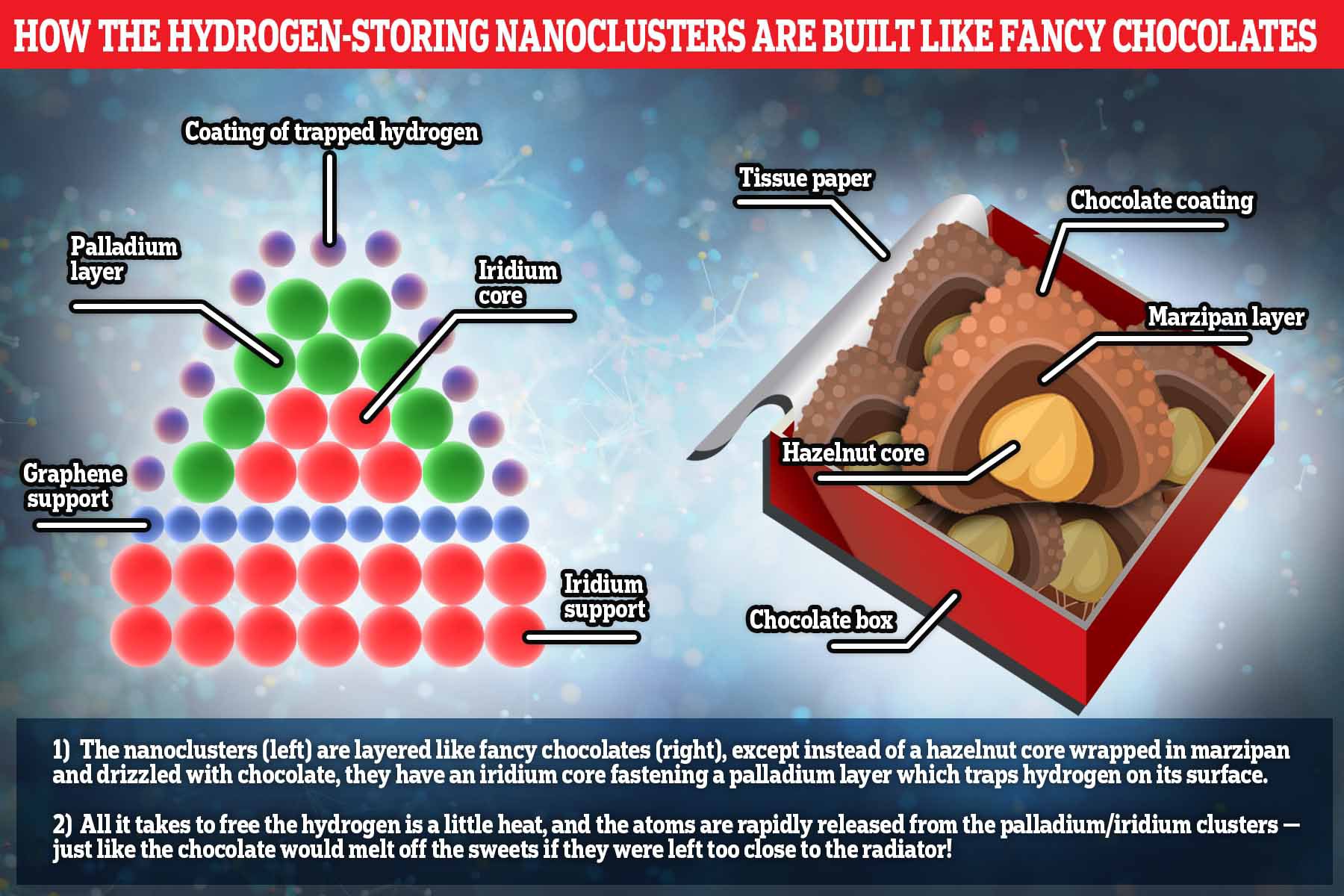 A team of scientists has come up with an innovative method of storing hydrogen gas in specially designed ‘nanoclusters’.

Mimicing a box of fancy chocolates, the tiny little chambers would allow the volatile gas to be safely stored.

Hydrogen is expected to become a key player in the world of sustainable fuel and could eventually power planes, boats and cars.

The element has an attractivly high energy content per unit of weight, roughly three times that of petrol. And the only byproduct of a hydrogen-powered vehicle is water vapour.

Unfortunately, hydrogen is tricky to store and transport due to its volatility. It must either be contained in a tank pressurised to around 700 times the atmospheric pressure at sea level, or alternatively chilled down to around -253°C.

But the scientists from the Deutsches Elektronen-Synchrotron (DESY) say their solution of nanoclusters – each just a few atoms across in size – is a better option.

The clusters are created from palladium particles and the hydrogen is trapped on the surface of each one. The team say it means hydrogen can be stored at ambient temperatures.

Underneath each cluster is a layer of graphene (a thin sheet of carbon atoms arranged in a hexagonal pattern) and, beneath that, an iridium base.

Going back to our chocolate metaphor, it’s like the tissue paper separating the sweets and the box itself.

Palladium has been known to soak up hydrogen for a while, but the problem is it goes too far.

By only using such small amounts of palladium, the hydrogen sticks to the surface rather than being sucked inside. To release it, the clusters just need to be heated up.

The graphene and iridium meanwhile keep the structure sturdy.

‘We are able to attach the palladium particles to the graphene at intervals of just two and a half nanometers,’ reports Andreas Stierle, who is the head of the DESY NanoLab.

‘This results in a regular, periodic structure.’

‘Next, we want to find out what storage densities can be achieved using this new method,’ said Stierle.

However, some challenges still need to be overcome before proceeding to practical applications. For example, other forms of carbon structures might be a more suitable carrier than graphene.

The team are considering using carbon sponges containing tiny pores that could fit substantial amounts of palladium inside.

Don’t worry though, we’ll still find a way to explain it through the analogy of chocolate.

Ballet teacher discovered she was pregnant hours before giving birth

NASA Has Discovered Water on the Sunlit Surface of the Moon