Home » Technology » Inside Twitter’s Decision to Cut Off Trump

SAN FRANCISCO — Jack Dorsey, Twitter’s chief executive, was working remotely on a private island in French Polynesia frequented by celebrities escaping the paparazzi when a phone call interrupted him on Jan. 6.

On the line was Vijaya Gadde, Twitter’s top lawyer and safety expert, with an update from the real world. She said she and other company executives had decided to lock President Trump’s account, temporarily, to prevent him from posting statements that might provoke more violence after a mob stormed the U.S. Capitol that day.

Mr. Dorsey was concerned about the move, said two people with knowledge of the call. For four years, he had resisted demands by liberals and others that Twitter terminate Mr. Trump’s account, arguing that the platform was a place where world leaders could speak, even if their views were heinous. But he had delegated moderation decisions to Ms. Gadde, 46, and usually deferred to her — and he did so again.

Mr. Dorsey, 44, did not make his misgivings public. The next day, he liked and shared several tweets urging caution against a permanent ban of Mr. Trump. Then, over the next 36 hours, Twitter veered from lifting Mr. Trump’s suspension to shutting down his account permanently, cutting off the president from a platform he had used to communicate, unfiltered, with not just his 88 million followers but the world. 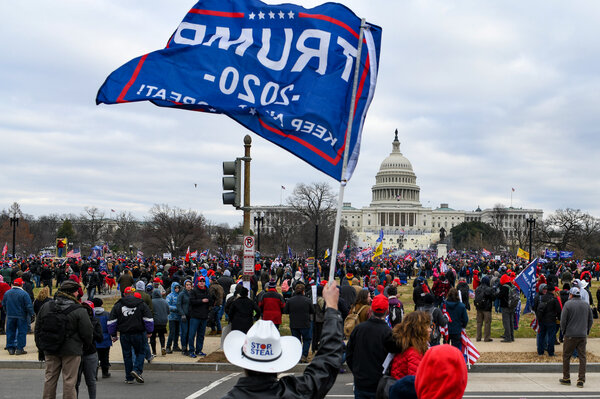 The decision was a punctuation mark on the Trump presidency that immediately drew accusations of political bias and fresh scrutiny of the tech industry’s power over public discourse. Interviews with a dozen current and former Twitter insiders over the past week opened a window into how it was made — driven by a group of Mr. Dorsey’s lieutenants who overcame their boss’s reservations, but only after a deadly rampage at the Capitol.

Having lifted the suspension the next day, Twitter monitored the response to Mr. Trump’s tweets across the internet, and executives briefed Mr. Dorsey that Mr. Trump’s followers had seized on his latest messages to call for more violence. In one post on the alternative social networking site Parler, members of Twitter’s safety team saw a Trump fan urge militias to stop President-elect Joseph R. Biden Jr. from entering the White House and to fight anyone who tried to halt them. The potential for more real-world unrest, they said, was too high.

Twitter was also under pressure from its employees, who had for years agitated to remove Mr. Trump from the service, as well as lawmakers, tech investors and others. But while more than 300 employees signed a letter saying Mr. Trump’s account must be stopped, the decision to bar the president was made before the letter was delivered to executives, two of the people said.

On Wednesday, Mr. Dorsey alluded to the tensions inside Twitter. In a string of 13 tweets, he wrote that he did “not celebrate or feel pride in our having to ban @realDonaldTrump” because “a ban is a failure of ours ultimately to promote healthy conversation.”

But Mr. Dorsey added: “This was the right decision for Twitter. We faced an extraordinary and untenable circumstance, forcing us to focus all of our actions on public safety.”

Mr. Dorsey, Ms. Gadde and the White House did not respond to requests for comment.

Since Mr. Trump was barred, many of Mr. Dorsey’s concerns about the move have been realized. Twitter has been embroiled in a furious debate over tech power and the companies’ lack of accountability.

Lawmakers such as Representative Devin Nunes, a Republican from California, have railed against Twitter, while Silicon Valley venture capitalists, First Amendment scholars and the American Civil Liberties Union have also criticized the company. At the same time, activists around the world have accused Twitter of following a double standard by cutting off Mr. Trump but not autocrats elsewhere who use the platform to bully opponents.

“This is a phenomenal exercise of power to de-platform the president of the United States,” said Evelyn Douek, a lecturer at Harvard Law School who focuses on online speech. “It should set off a broader reckoning.”

Mr. Trump, who joined Twitter in 2009, was a boon and bane for the company. His tweets brought attention to Twitter, which sometimes struggled to attract new users. But his false assertions and threats online also caused critics to say the site enabled him to spread lies and provoke harassment.

Many of Twitter’s more than 5,400 employees opposed having Mr. Trump on the platform. In August 2019, shortly after a gunman killed more than 20 people at a Walmart in El Paso, Twitter called a staff meeting to discuss how the gunman, in an online manifesto, had echoed many of the views that Mr. Trump posted on Twitter.

At the meeting, called a “Flock Talk,” some employees said Twitter was “complicit” by giving Mr. Trump a megaphone to “dog whistle” to his supporters, two attendees said. The employees implored executives to make changes before more people got hurt.

Over time, Twitter became more proactive on political content. In October 2019, Mr. Dorsey ended all political advertising on the site, saying he worried such ads had “significant ramifications that today’s democratic structure may not be prepared to handle.”

But Mr. Dorsey, a proponent of free speech, declined to take down world leaders’ posts, because he considered them newsworthy. Since Twitter announced that year that it would give greater leeway to world leaders who broke its rules, the company had removed their tweets only once: Last March, it deleted messages from the presidents of Brazil and Venezuela that promoted false cures for the coronavirus. Mr. Dorsey opposed the removals, a person with knowledge of his thinking said.

Mr. Dorsey pushed for an in-between solution: appending labels to tweets by world leaders if the posts violated Twitter’s policies. In May, when Mr. Trump tweeted inaccurate information about mail-in voting, Mr. Dorsey gave the go-ahead for Twitter to start labeling the president’s messages.

After the Nov. 3 election, Mr. Trump tweeted that it had been stolen from him. Within a few days, Twitter had labeled about 34 percent of his tweets and retweets, according to a New York Times tally.

Then came the Capitol storming.

On Jan. 6, as Congress met to certify the election, Twitter executives celebrated their acquisition of Ueno, a branding and design firm. Mr. Dorsey, who has often gone on retreats, had traveled to the South Pacific island, said the people with knowledge of his location.

When Mr. Trump used Twitter to lash out at Vice President Mike Pence and question the election result, the company added warnings to his tweets. Then as violence erupted at the Capitol, people urged Twitter and Facebook to take Mr. Trump offline entirely.

That led to virtual discussions among some of Mr. Dorsey’s lieutenants. The group included Ms. Gadde, a lawyer who had joined Twitter in 2011; Del Harvey, vice president of trust and safety; and Yoel Roth, the head of site integrity. Ms. Harvey and Mr. Roth had helped build the company’s responses to spam, harassment and election interference.

The executives decided to suspend Mr. Trump because his comments appeared to incite the mob, said the people with knowledge of the discussions. Ms. Gadde then called Mr. Dorsey, who was not pleased, they said.

Mr. Trump was not barred completely. If he deleted several tweets that had stoked the mob, there would be a 12-hour cooling-off period. Then he could post again.

From Riot to Impeachment

The riot inside the U.S. Capitol on Wednesday, Jan. 6, followed a rally at which President Trump made an inflammatory speech to his supporters, questioning the results of the election. Here’s a look at what happened and the ongoing fallout:

How old is John Barrowman, who did he play in Arrow, Doctor Who and Torchwood and who is his husband?

The best Cyber Monday deals you can buy right now

'The Queen's Gambit': What the Series Got Wrong and Where it Differed From Walter Tevis' Book

Single mum gives her drab kitchen a stunning makeover with a lick of paint, modern tiles & £1 cupboard handles from eBay