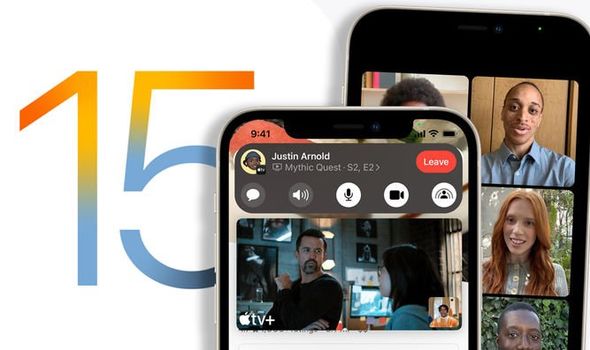 Apple may be about to release its iPhone 13 range later this week but if you’re not in the market for a new smartphone then don’t panic. The US technology firm is also pushing out its iOS 15 software upgrade today, Monday September 20, which comes packed with new features including improved FaceTime calls, better ways to stop annoying texts from distracting you, more Memoji options and a huge upgrade to the Apple Maps app.

As long as your iPhone is running iOS 14 you should have no issues upgrading later today and, like all iOS updates, it’s totally free to download and install.

What time will iOS 15 be available?

Apple never reveals an exact launch time for its iOS software upgrades but things usually get pushed out from 6pm BST.

There was a slight delay in 2020 which left some users waiting until almost 8pm before they received the download but this is pretty rare.

It’s worth remembering that it can take longer to access the iOS update on launch day as millions of Apple fans attempt to install things at the same time. So if you’re not bothered about having the new features tonight it might be worth waiting until tomorrow or later this week before attempting to upgrade.

Like Vodafone, Sky Mobile lets you customise how long you’re going to spend paying off the handset. For the best deal, you’ll need to sign-up for a 36-month plan, although Sky Mobile does let you switch to a new handset after 24 months at no cost. With a solid 3GB of mobile data, unlimited calls and texts – this is a pretty good deal. And unlike some networks, unused data can be used the following month too. Upfront cost: FREE!

With no upfront cost and a monthly charge of £33, Virgin Media O2’s iPhone 13 deal is a real bargain – especially as you’ll take delivery of the latest Apple handset on launch day (24/09). It is a 36-month contract and you on;y get 2GB of 5G data, so it’s not suitable for anyone who plans to stream Netflix on the train to work every day. But unlimited calls and texts are a real bonus at this price! Upfront cost: FREE!

Carphone Warehouse’s own iD network has a great balance of price and mobile data for its iPhone 13 pre-order deal. You’ll get a solid 20GB of data each month, which should be more than enough to stream Apple Music, watch a little YouTube, and make a WhatsApp video call away from Wi-Fi. There’s also unlimited calls and texts. Upfront cost: £29

Vodafone lets you completely customise your monthly payments – you can choose the amount of time you’ll be paying off the cost of the handset (either 12, 24, or 36 months), the upfront cost, and the amount of 5G mobile data, minutes and data. It’s a little pricier than the bundles above, but it does come with a hefty 25GB of speedy 5G data as well as unlimited calls and texts. Upfront cost: £29

If you’re looking for the lowest monthly cost, you’d be better with one of the options above. However, EE does offer the best network coverage across the UK as well as some eye-watering 5G speeds. With 1GB of mobile data, this plan isn’t for those who want to stream all the time. Upfront cost: £80

Mike 'The Situation' Sorrentino Speaks About His Return to 'Jersey Shore,' Says 'There's no Feeling Like It'

Greta Garbo: The Star Who Upheld Her Image as Hollywood’s Most Mysterious Figure for Six Decades