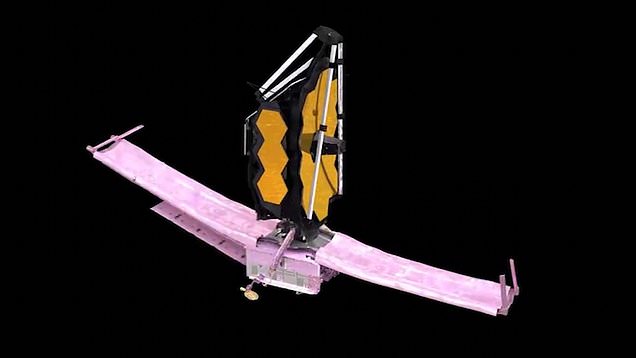 Nasa confirmed that its most powerful space telescope that was launched on Christmas Day completed a crucial step involving its most unpredictable and complicated component: the sunshield.

Three-and-a-half days into its mission and around 320,000 miles from Earth, the James Webb Space Telescope is now gradually opening up from inside the rocket.

The operations team completed the deployment of the forward pallet at approximately 6.21 p.m. UK time, after a process that took four hours. The team will now move on to deploy the aft pallet.

‘The deployment of the forward pallet required several hours of the mission operations team carefully walking through dozens of steps – only one of which was the actual motor-driven deployment to move the pallet from its stowed position to its deployed state,’ said Nasa in a press release.

The lowering of the forward pallet also marks the first time it was performed after the final unfolding and deployment test in December 2020 at Northrop Grumman Space Park in Redondo Beach, California.

Following this success, the team will need to perform at least five more days of necessary steps to deploy the sunshield which can make or break the $10 billion telescope mission.

According to Nasa, the next few days will ‘ultimately determine the mission’s ability to succeed’.

If the tennis court-sized sunshield, isn’t in place to keep Webb’s telescope and instruments extremely cold, Webb would be unable to observe the universe in the way it was designed.

More steps are required for the sunshield’s full deployment, with Sunday, January 2 set as the target date for completing the process.

However, with the deployment of the sunshield expected to be one of the most challenging tasks Nasa has ever attempted, the space agency cautioned that the schedule and sequence of next steps could change in the coming days.

Following that, the telescope’s large, golden mirror has to be deployed in what will be another nail-biting process for Nasa and its partners.

The most powerful space telescope ever built is expected to arrive at its destination orbit around a million miles from Earth towards the end of January. After that, around five months will be needed to align the telescope’s mirror and fine-tune its instruments.

Scream Returns with David Arquette! Everything to Know About the Upcoming Sequel

FDA grants Moderna permission to increase doses in each vial from 10 to 14: report