After the muted success of Lego’s last augmented reality app sets, Ultra Agents, the Danish toy company went back to the drawing board and has come out with Hidden Side; spooky sets with an all new app experience.

The plot is that Newbury High School mostly seems normal, until friends Jack and Parker use their phones to uncover paranormal mysteries. It’s a theme that has taken some inspiration from Stranger Things, and it works. 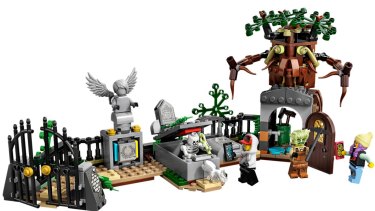 Hidden Side sets have interactive parts with coloured panels you can scan with an app.

The Graveyard Mystery may only have 335 pieces but it was actually one of the most satisfying builds I’ve done in a while. It has so much detail, from the graves with their lids on hinges for hiding things (or revealing things during the game), to that amazing moving tree. There are some pretty cool building techniques on display, and it’ll give kids (or, let’s face it, adults) a good evening of building. As a playset by itself, the Graveyard has plenty of play potential and could be incorporated into so many scenes or games outside the app.

The Paranormal Intercept Bus is a little more straightforward. At 689 pieces, I expected it to be more interesting than the graveyard, but it was actually kind of a letdown in comparison.

The port-a-loo which shoots discs is a nice touch, as are the ghoulish construction workers, and there’s plenty of play that can be had with a classic American schoolbus-turned-ghost-fighting-lab. But it’s a bit more traditional and less innovative than the tree in the graveyard. 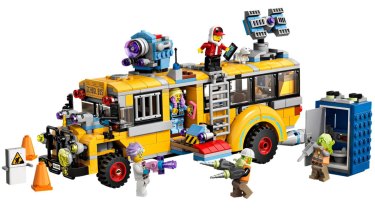 The bus is big but uncomplicated.

Both sets have Jack and Parker figures, with slightly different outfits. Parker’s moulded purple hair is a great new piece, and Jack’s cap and hoodie are moulded nicely. The best new piece, though, is the dog. I love this ghost dog. The game and the sets could be terrible, and it would all be worth it for this dog. The bus also has “tech genius” JB, whose mauve hair and goggles piece is superb.

After all the build-up of the sets, I expected the app to be more than it is. 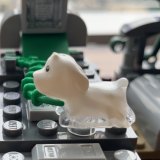 The Hidden Side app is split into two sides, Hunter and Ghost. Hunter is where you play as Jack and Parker and scan your sets into AR, aiming to both reduce how haunted the town is and gain more “followers” to unlock rewards.

To play, you move your phone around the set to find ghosts, then you turn part of the set to reveal a new colour, then hunt down the ghost of that colour. At the end you can fight a boss who throws slime at you. Kids who get into the cartoon will love pretending to be their favourite characters. Adults who expect more from video games will soon realise this isn’t meant for them.

The more sets you have, the more areas of the town you can cleanse. So if you buy one set, you might want to brace yourself for requests to buy the other sets in the collection.

Over in the Ghost half of the app you don’t need any sets at all. It’s a helpful way to see if your kid is interested before paying money for things. In Ghost you haunt Newbury, and it’s actually really fun, if a little confusing at times.

Looking at the range of sets there seems to be something for everyone with some innovative ideas mixed in. The star of the show is undeniably the physical Lego, but this is certainly the company's best app to date, and for me at least the whole thing was more fun than the Lego console games of the last few years.

Where the EastEnders originals are now after Sandy Ratcliff’s death

Marvel Fans Think Robert Downey Jr Deserves an Oscar for 'Avengers: Endgame' – Where You Can Sign the Petition

American Sniper Wife Taya Kyle's New Book 'Is a Love Letter' to America: 'There Are So Many People Doing Good'

Cleaning fan reveals the correct way you should be using a toilet rim block, and you have definitely been doing it wrong