Microsoft has unveiled a new version of its Xbox One console that does not feature a disc drive, marking the company's biggest step yet away from physical media and retail middle-men towards an all-digital future where gamers purchase and download software directly from an online store.

The Xbox One S All-Digital Edition looks exactly like the existing Xbox One S, except with blank white casing where the disc drive opening would usually be. 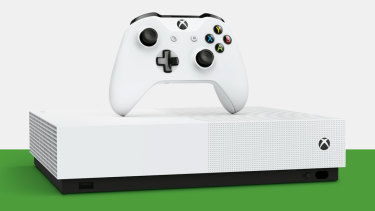 The Xbox One S All-Digital Edition is a (supposedly) less expensive model that does not accept physical game discs.

It will perform exactly like the existing Xbox One S as well. It can still stream video in 4K HDR from various apps, play games in full HD and HDR, and output Dolby Atmos and DTS:X Audio. It will also use the same controller and have a 1TB hard drive. The only difference is games and movies must come via the console's online store (which is the same as it is on all Xbox One consoles) rather than from a disc.

The move could give a glimpse at Microsoft's console plans going forward. The company is gearing up to reveal its family of next-generation machines, code-named Scarlett, and it's been strongly rumoured to include both a high-end version and a less expensive box. It's possible the latter could rely on game downloads — or even game streaming — rather than physical media, which could lower build cost and allow for a smaller design.

Though the Xbox One S All-Digital Edition doesn't add anything the regular Xbox One S does not have, it will come at a lower price and will include Minecraft, Forza Horizon 3 and Sea of Thieves pre-installed.

It will also come with a voucher for Xbox Game Pass — an all-you-can-eat subscription service including more than 100 games — but it's unclear what duration of membership is included.

In the US the All-Digital Edition will go for $US250; $US50 less than the standard Xbox One S. But in Australian money that equates to around $350, which is what you'd pay for a 1TB Xbox One S right now. Given the All-Digital Edition has the same hard drive size, but lacks compatibility with games or movies on discs, one would hope the Australian price will turn out a bit lower.

Xbox says Australian launch and pricing details will be announced in the coming weeks.

The console was announced during the latest Inside Xbox stream, during which Microsoft also announced Xbox Game Pass Ultimate, a new tier of the subscription service that includes access to the games library plus the benefits of Xbox Gold (i.e. online play, game discounts and free games every month). Ultimate will cost $15.95 per month in Australia, a saving of $5 per month versus paying for Gold and Game Pass separately.

The Kardashian-Jenners Won Halloween With Their VS Angel Costumes