Cape Canaveral, Florida: NASA’s experimental helicopter Ingenuity rose into the thin air above the dusty red surface of Mars on Monday, achieving the first powered flight by an aircraft on another planet.

The triumph was hailed as a Wright Brothers moment. The mini 1.8-kilogram copter even carried a bit of wing fabric from the 1903 Wright Flyer, which made similar history at Kitty Hawk, North Carolina. 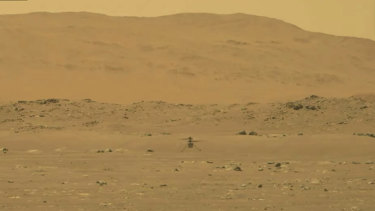 “Altimeter data confirms that Ingenuity has performed its first flight, the first flight of a powered aircraft on another planet,” said the helicopter’s chief pilot back on Earth, Havard Grip, his voice breaking as his teammates erupted in applause.

It was a brief hop – just 39 seconds – but accomplished all the major milestones.

Project manager MiMi Aung was jubilant as she ripped up the papers holding the plan in case the flight had failed. “We’ve been talking so long about our Wright Brothers moment, and here it is,” she said.

Flight controllers at NASA’s Jet Propulsion Laboratory in California declared success after receiving the data and images via the Perseverance rover, which stood watch more than 65 metres away. Ingenuity hitched a ride to Mars on Perseverance, clinging to the rover’s belly upon their arrival in an ancient river delta in February.

The $US85 million helicopter demo was considered high risk, yet high reward. “Each world gets only one first flight,” Aung observed earlier this month. 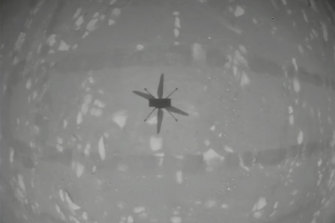 The Ingenuity helicopter hovers above the surface of Mars on Monday,Credit:NASA via AP

“While these two iconic moments in aviation history may be separated by time and 173 million miles of space, they now will forever be linked,” NASA’s science missions chief Thomas Zurbuchen announced.

The little chopper with a giant job attracted attention from around the world, from the moment it launched with Perseverance last July. Even Arnold Schwarzenegger joined in the fun, rooting for Ingenuity over the weekend via Twitter. “Get to the chopper!” he shouted, re-enacting a line from his 1987 sci-fi film Predator.

Up to five helicopter flights are planned, each one increasingly ambitious. If successful, the demo could lead the way to a fleet of Martian drones in decades to come, providing aerial views, transporting packages and serving as scouts for astronauts. High-altitude helicopters here on Earth could also benefit – imagine choppers easily navigating the Himalayas.

“This gives us amazing hope for all of humanity,” Zurbuchen tweeted. Indeed, JPL’s mantra, “Dare Mighty Things,” was printed on a wall of the control room.

Ingenuity’s team has until the beginning of May to complete the test flights. That’s because the rover needs to get on with its main mission: collecting rock samples that could hold evidence of past Martian life, for return to Earth a decade from now.

Biden snaps at reporter questioning his cognitive abilities: ‘Are you a junkie?’