For months, complaints from tech companies against Apple's and Google's power have grown louder.

Spotify, the music streaming app, criticised Apple for the rules it imposed in the App Store. A founder of the software company Basecamp attacked Apple's "highway robbery rates" on apps. And last month, Epic Games, maker of the popular game Fortnite, sued Apple and Google, claiming they violated antitrust rules. 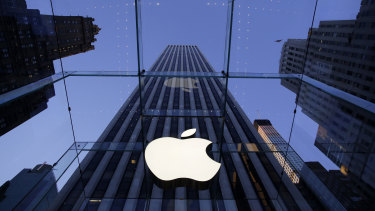 Complaints about the market power of Apple and Google have been getting louder in recent times.Credit:AP

Now these app makers are uniting in an unusual show of opposition against Apple and Google and the power they have over their app stores. On Thursday, the smaller companies said they had formed the Coalition for App Fairness, a nonprofit group that plans to push for changes in the app stores and "protect the app economy." The 13 initial members include Spotify, Basecamp, Epic and Match Group, which has apps like Tinder and Hinge.

"They've collectively decided, 'We're not alone in this, and maybe what we should do is advocate on behalf of everybody,'" said Sarah Maxwell, a spokeswoman for the group. She added that the new nonprofit would be "a voice for many."

Scrutiny of the largest tech companies has reached a new intensity. The Department of Justice is expected to file an antitrust case against Google as soon as next week, focused on the company's dominance in internet search. In July, Congress grilled the chief executives of Google, Apple, Amazon and Facebook about their practices in a high-profile antitrust hearing. And in Europe, regulators have opened a formal antitrust investigation into Apple's App Store tactics and are preparing to bring antitrust charges against Amazon for abusing its dominance in internet commerce.

For years, smaller rivals were loath to speak up against the mammoth companies for fear of retaliation. But the growing backlash has emboldened them to take action.

Spotify and others have become more vocal. And on Monday (US time), Epic and Apple are set to meet in a virtual courtroom in the Northern District of California to present their cases for whether Fortnite should stay on the App Store, before a trial over the antitrust complaint next year.

At the heart of the new alliance's effort is opposition to Apple's and Google's tight grip on their app stores and the fortunes of the apps in them. The two companies control virtually all of the world's smartphones through their software and the distribution of apps via their stores. Both also charge a 30 per cent fee for payments made inside apps in their systems.

App makers have increasingly taken issue with the payment rules, arguing that a 30 per cent fee is a tax that hobbles their ability to compete. In some cases, they have said, they are competing with Apple's and Google's own apps and their unfair advantages.

Apple has argued that its fee is standard across online marketplaces. 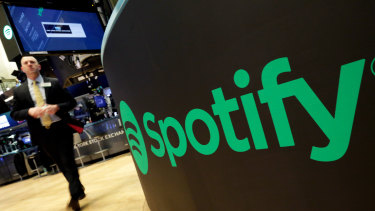 Spotify is one of the 13 members of the coalition. Credit:AP

On Thursday, the coalition published a list of 10 principles, outlined on its website, for what it said were fairer app practices. They include a more transparent process for getting apps approved and the right to communicate directly with their users. The top principle states that developers should not be forced to exclusively use the payments systems of the app store publishers.

Apple did not immediately have a comment on the coalition; Google didn't respond to a request for comment.

The coalition came together in recent months after discussions among executives at Tile, Epic, Spotify and Match Group, the four companies that have been most vocal in their opposition to the big tech companies, Maxwell said.

Some of the conversations took place after Apple and Google booted Fortnite from their app stores last month for violating their payment rules. As Epic's fight with Apple and Google escalated, Spotify and Match Group spoke out in support of the video game company.

Apple has argued that Epic's situation "is entirely of Epic's own making."

Apple has blocked Blockchain's apps several times, Smith said. Some customers were so frustrated by the blockages that they posted videos of themselves destroying iPhones with machetes.

"These app stores have gotten so big that they are effectively deciding what customers get access to," Smith said.

Tim Sweeney, Epic's chief executive, said his company had received "vast, vast amounts of communication" from app developers who supported it after it sued. But many are afraid to speak up publicly, he said.

"Apple and Google have infinite ways of retaliating without it being obvious to the outside world" by slowing down apps, reinterpreting rules in negative ways or saying no to new features, Sweeney said in an interview this week.

He said Epic had a history of standing up for what it thought was right. "But of course," he added, "it is very stressful to go through, you know, a fight with two companies that are over 200 times our size."

11 dead, 6 injured in shooting at Tree of Life synagogue in Pittsburgh

Sofia Richie & Scott Disick: Why They Wanted To Finally Clear The Air & Have Dinner With Kourtney