Home » Technology » Ride-Sharing’s Future? It May Sit on Electric Motorbikes

BANGALORE, India — In Uber’s vision of the future, self-driving cars will whisk us everywhere, eliminating the need for its millions of human drivers.

But as the ride-hailing giant prepares to sell as much as $10 billion in stock to the public this week to help build those vehicles, a low-tech approach to the self-driving future is already emerging in India: motorbikes that customers rent and drive themselves.

Several start-ups — backed by big Silicon Valley venture firms and Uber’s Indian competitor, Ola — are betting that shared “two-wheelers” are better suited to wallets and transportation needs than the cars that are the heart of the ride-hailing industry. 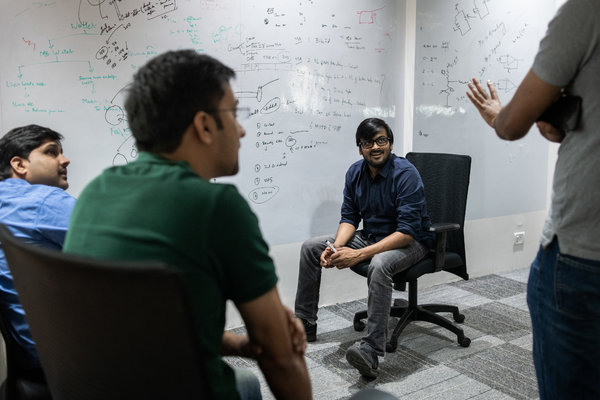 The traditional model of Uber and Ola is reaching its limits, said Vivekananda Hallekere, a co-founder and the chief executive of Bounce, which fields more than 6,000 motorbikes that people can pick up and drop off anywhere in the southern Indian city of Bangalore. The car rides are too expensive for most Indians, the drivers complain about long hours and poor compensation, and the ride-hailing platforms are struggling to make a profit, he said.

“You can’t make it affordable with a driver,” Mr. Hallekere said. “And if users know how to use a scooter, why do you need a driver?”

By focusing on the large swath of people who cannot afford current ride-hailing services, these start-ups are opening up a new front in the global battle to provide shared transportation services. In developed countries like the United States, Uber undercut the taxi industry and created new demand for rides by persuading tens of millions of customers to hop in a car with an ordinary driver summoned by an app. But in developing countries like India, where two-wheeled vehicles outsell cars six to one, Uber and its competitors must figure out a different approach or risk disruption from below.

India, with 1.3 billion residents, is the world’s largest market for motorcycles. About 20 million new ones are sold annually, from low-powered scooters to heavy-duty Harley-Davidsons. Industry players estimate that 200 million people possess a license to drive at least a basic two-wheeler.

On a recent weekday morning, Mallikarjun D., a software engineer, pulled out his smartphone and booked an electric motorcycle on Vogo, a Bounce competitor, for his nine-mile commute to his job at the outsourcing giant Infosys.

Usually he takes the Infosys bus, he said as he put on his helmet and grabbed the bike from a garden that served as Vogo’s neighborhood parking lot. But he was running late, and at a special rate of 10 rupees, or 14 cents, for the full day, he found the bike to be the perfect solution.

“It’s a reasonable cost,” Mr. Mallikarjun said. “And it’s helpful for the environment.”

Vogo and Bounce are slugging it out for dominance in Bangalore, India’s tech hub, where Ola is also based and is watching carefully. Vogo requires people to pick up and drop off their bikes at designated locations, while Bounce bikes can be picked up or left anywhere.

Nomita D. P., who was shopping for school clothes with her 10-year-old daughter near the Jayanagar metro station, said she had been using Bounce for about five months. It is cheaper than an auto-rickshaw, the three-wheeled taxis that are common in India, and more reliable than an Uber or Ola car, she said.

“You wait for a car, and then they cancel,” said Ms. Nomita, a medical editor who works from home. “A rickshaw driver will refuse to take you because you are going in the wrong direction.”

Right now, Vogo and Bounce motorbikes are hard to find. Both companies are racing to get enough on the streets — aiming for around 50,000 apiece — to make their services truly convenient in Bangalore. Other big cities will follow.

The nascent industry is facing other challenges. At the Jayanagar station, the trunks on two of Bounce’s motorbikes would not open, trapping the helmets inside — a common problem. Ms. Nomita’s scooter was missing its rearview mirror. Many vehicles were dirty.

How viable these services will be over the long term is unclear. Like Uber and Ola in their early days, both companies are offering promotions to bring down the price of rides, which requires a lot of spending.

“You want it to be habit-forming for the customer,” said Anand Ayyadurai, Vogo’s co-founder and chief executive, who said costs would come down over time.

There is also the sobering lesson of shared bicycles in India, which were heralded as a great idea but failed to take off. The country’s chaotic traffic and the long distances between public transit and homes and workplaces made shared bicycles unappealing, forcing several operators to shut down.

“It’s a very complicated, very hard business,” said Shailesh Lakhani, a partner at the venture capital firm Sequoia Capital, which has invested in Bounce. “That said, the amount of demand is insane.”

Vogo and Bounce are hoping to cut costs by stocking their fleets with electric motorbikes, which cost less by the mile than gasoline ones. They are looking to another Bangalore start-up, Ather Energy, to supply them. Ather has engineered a premium-priced, aspirational electric scooter that is one of the few to qualify for government clean-energy subsidies, and it is building a network of fast-charging stations.

Yet Ather can make only about 500 scooters a month at its Bangalore factory. The company is lining up a manufacturing partner to vastly increase production, said Tarun Mehta, a co-founder of Ather and its chief executive.

Bounce and Vogo are preparing to ramp up their fight with new funding.

Bounce has raised $18.9 million from venture firms such as Sequoia and Accel, according to corporate filings analyzed by the data firm Paper.vc, and it is raising an additional $80 million.

Vogo has raised $17.8 million from Ola, the American venture firm Matrix Partners and several Indian firms. Ola also plans to provide up to $100 million to help Vogo deploy as many as 100,000 motorbikes and has promised to include the vehicles as an option on its popular ride-hailing app.

Ola’s decision is pragmatic. Traditional ride-hailing is a maturing business in India, much as it is in the rest of the world. Many drivers are unhappy with reduced payments from Ola and Uber, and have periodically gone on strike in Mumbai, Delhi and Bangalore to press for better terms. Riders complain of long waits for cars and rising fares. Public transit systems, particularly metro lines, are improving but will not get people the last mile to home or work.

“How do you create mobility options for the next 900 million?” asked Anand Shah, a senior vice president at Ola who oversees its electric mobility efforts. “You don’t have to look far — you can see what India is choosing.”

In addition to supporting Vogo, Ola offers motorbike taxis in some Indian cities and is promoting wider adoption of electric auto-rickshaws.

Uber has made no moves toward motorbike sharing. But it has recognized the potential of cheap vehicles that customers drive themselves. Last year, it bought Jump, which rents out electric bicycles and motorized stand-up scooters in two dozen major cities in the United States and Europe. In February, Uber said more customers in Sacramento, California’s capital, had rented its Jump vehicles than had summoned traditional cars.

Uber declined to comment, citing the quiet period ahead of its initial public offering.

Scooters, bicycles and mopeds have the potential to steal some market share from the Ola and Uber car services, said Chandrasekar Iyer, who is studying disruption in the auto industry as a fellow at the Clayton Christensen Institute in the San Francisco area. But Mr. Iyer, a consultant at Tata Consultancy Services, predicted that the ride-hailing giants would not stand idle.

Vivek Durai, a co-founder of Paper.vc, which closely monitors privately held companies in India, said the big money was beginning to flood in.

“There is a deep hunger to solve this,” he said. “People need flexible options for transport.”