When the pandemic forced people indoors a year ago, many passed the time by playing games on their iPhones, building gaming computers and exploring the latest blockbuster titles on their Xbox and PlayStation consoles.

For video game companies, that has meant gushers of cash. A record $56.9 billion was spent on gaming last year in the United States, up 27 percent from 2019, according to the NPD Group. Sony, which released the PlayStation 5 in November, recently reported a 62 percent profit jump while Microsoft tallied $5 billion in quarterly gaming revenue for the first time, helped by sales of its new Xbox devices.

On Wednesday, the pandemic’s booming effect on gaming was even more starkly on display when Roblox, a gaming platform aimed at children, went public.

The Silicon Valley company opened its first day of trading at $64.50 a share, up more than 43 percent from a reference price of $45 that was set on Tuesday. That valued Roblox at $41.9 billion, up from $4 billion just over a year ago.

“The game industry’s swimming in cash,” said Joost van Dreunen, a New York University professor who studies the business of video games. “It’s just raining money on these people, on these companies.”

Roblox’s performance was another sign of an increasingly hot initial public offering market. When Airbnb and DoorDash went public last year, their share prices immediately soared, raising questions about whether there was a new stock market bubble. The investor demand for fast-growing young companies has been so off the charts that Roblox decided in December to delay its listing because it was too difficult to price its shares accurately.

That hype has been compounded for Roblox by the euphoria over video gaming in general. Apart from Microsoft’s and Sony’s new gaming consoles last year, mobile games like Among Us became internet phenomena essentially overnight. Video game makers such as Take-Two Interactive and Electronic Arts have tried to outbid one another to buy up smaller competitors. And hundreds of gaming start-ups have sprung up during the pandemic, said Evan Van Zelfden, the managing director for Games One, an advisory firm.

“It seems like there is a new start-up funded nearly every day,” he said. “Everybody wants to be the next Roblox.”

But how long that frenzy can last is increasingly under question. With vaccinations rolling out and pandemic restrictions easing in some places, gaming behavior may begin to change. Investors are not thinking about what will happen when the pandemic subsides, Mr. van Dreunen said.

“There’s going to be a lot less time to play Roblox,” he said.

David Baszucki, Roblox’s chief executive and a founder, said Wednesday in an interview that he does not expect the platform to hemorrhage players when the pandemic ends and children return to playing with friends outside.

“We don’t think we’re going to lose all of that, or all of the amazing people we’ve gathered,” he said. His shares in the company were valued at approximately $5 billion when trading opened. 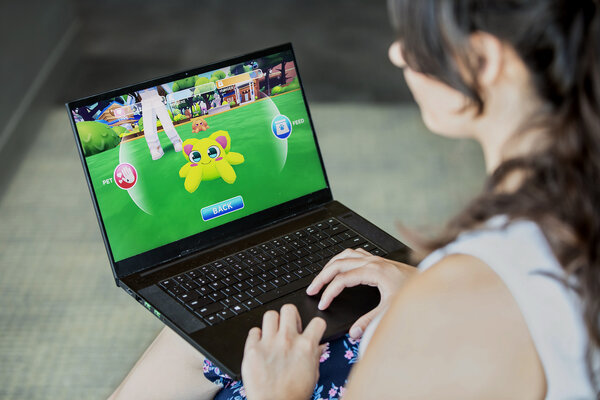 Roblox, which went public in a direct listing in which no new shares were issued, was founded in 2004 by Mr. Baszucki and Erik Cassel, who were engineers and entrepreneurs. (Mr. Cassel died of cancer in 2013.)

The site, which was released in 2006, is an online universe in which players can interact and choose from more than 20 million unique games. They can then use their avatars to break out of prison, explore tropical jungles or adopt pets. Players pay for premium memberships, as well as for items and clothing for their avatars using a digital currency called Robux.

For years, Roblox steadily gained popularity with younger audiences. That growth was turbocharged last year by the pandemic. On average, 32.6 million people a day logged into Roblox, nearly double the 2019 average of 17.6 million, the company said. While Roblox is unprofitable, its revenue surged 82 percent to $924 million last year.

Over the years, Roblox raised $871 million in funding. Its biggest investors include Altos Ventures, Index Ventures and Meritech Capital Partners.

Roblox has also enriched many developers, who make its games and digital accessories. Many of the developers are teenagers and young adults who grew up on the platform. They split their profits 50-50 with the company.

Those who create the most popular Roblox games can earn six-figure salaries. One developer, Anne Shoemaker, 21, said she had earned more than $500,000 from the platform, most of it since the pandemic began. She has used some of the money to hire two employees and a dozen contractors, she said.

The pandemic-fueled success, she said, has “been the push that I needed to have Roblox be my full-time job.”

After delaying its December listing, Roblox was supposed to go public in January. But it pushed that date back after the Securities and Exchange Commission asked the company to change the way it calculated its revenue. Roblox has since complied.

The eventual goal, the company has said, is to create a “metaverse,” a concept mostly reserved for science fiction that describes a shared online universe where people can live and interact as though they were there in person. Roblox holds business meetings on the platform and has promoted virtual concerts within its universe.

“Just as the mail, the telegraph, the telephone, text and video are utilities for collaborative work, we believe Roblox and the metaverse will join these as essential tools for business communication,” Mr. Baszucki said during the investor day. “Ultimately, someday we may even shop within Roblox.”

But before the metaverse can happen, Roblox will have to navigate what happens when the pandemic ebbs and children return to playing outside.

“A big chunk of the performance they had in 2020 in terms of revenue was Covid-related, particularly in the U.S.,” said David Gibson, the chief investment officer at Astris Advisory, a financial advisory firm in Tokyo. “The concern I have is they are forecasting this will slow down in the second half of 2021.”

Britons’ love affair with cars is stronger than ever, study shows