Home » Technology » Ruin the healthcare system from the comfort of home

A spiritual successor to Bullfrog's 1997 classic Theme Hospital, Two Point Hospital places countless cartoony lives in your dangerously inept hands. Fortunately, as a hospital administrator you're part of the professional management class, so you can dust off any controversy and move on to a richer posting elsewhere once you've done the bare minimum, leaving overworked doctors, stressed nurses, and furious patients in your wake. The system works.

Building a hospital to be proud of, or even one that just doesn't murder people, requires mastering the art of plate spinning. Sure, your psychiatry clinic may be overwhelmed by a "Mock Star" epidemic (karaoke singers convinced they have talent) but the only qualified shrink is urgently needed in the research lab to discover a cure for "Light Headedness" (literally patients with light bulbs for heads). 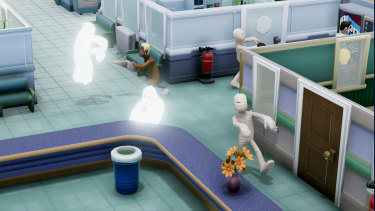 Be careful not to let your doctors take emergency leave and have all their patients die in your hospital’s hallways.

The tone is mercifully absurd – a hospital simulator with real diseases would be unbearably depressing – and the push and pull of sudden outbreaks, budget crises and waiting lists requires constant attention. As you progress, new plates and new methods to keep them in the air are unlocked. The result is you'll rarely feel comfortable; you're always a few poor investments, a few "Pandemics" (literally people with frying pans stuck on their heads) away from ruin. It's engrossing, stressful stuff.

You'll eventually run out of floor space, so it's wise to specialise based on location. Hospitals in ski resorts have higher rates of broken bones so doubling down on fracture wards is sensible, while university clinics build KPIs around training student doctors. There's a lot to take in, but the game does an admirable job of explaining drip-fed concepts.

It is, however, not without frustrations, the biggest culprit being AI. Staff need to be micromanaged excessively. They may all have medical degrees but that doesn't inoculate them from being morons incapable of finding a doorknob. Doctors also have a habit of taking leave concurrently during emergencies. You'll only notice they're gone when patients start dying in your hallways, leaving ghosts behind that only specially trained janitors can deal with. More plates, more spinning, repeat.

Two Point Hospital is engrossing in the least relaxing way possible. It's complex but not convoluted, funny and stressful all at once. It also made me eternally grateful I didn't pursue a career in medicine.

Two Point Hospital is available on Nintento Switch, PS4 and XBox One, classified as PG.

Police Searching for Man, 21, Suspected of Shooting 5 — Including His Parents — in Louisiana