Huge, bold and packing an excellent display and cameras, the Galaxy S10 5G is the best version of Samsung's 2019 flagship phone, and could be the greatest smartphone the Korean company has ever made. However, with Australia's 5G infrastructure in a decidedly early state, it might be tough to justify the extra cost over the Galaxy S10+.

Though this very large phone has a few tricks over the S10+, including more sophisticated cameras and a bigger screen, it also has some comparative drawbacks. It's significantly heavier, for example, and isn't compatible with external storage via MicroSD. The ability to connect to 5G networks really is the main selling point here but, at least in 2019, your mileage will vary. 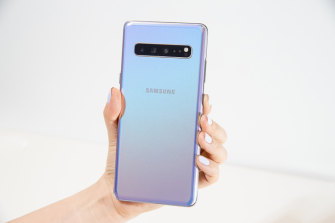 The Samsung Galaxy S10 5G is bigger and fancier than other S10 models, but comes at a high price.

So far in both Melbourne and Sydney I've only been able to get just under 200Mbps maximum download speeds out of Telstra's 5G (the only 5G available right now), which is comparable to a good 4G connection and far lower than 5G's ultimate potential. Plus the number of places you'll find 5G coverage is currently very limited, and on a couple of occasions I've had to manually fall back to 4G to solve connection issues.

This is all understandable given how early 5G is, and if you buy an S10 5G today it will all get better over the life of the phone, but the benefit on day one is pretty slight. Especially once you consider the cost.

Price and 5G capabilities aside, this smartphone is a bigger, better and more luxurious version of the already big and excellent S10 devices.

The massive S10 5G actually feels very nice in the hand, with its rounded glass front and back broken up by a raised aluminium frame, which helps grip. The front of the phone is all screen, save for the ovular double hole punch camera cutout top right. I'm not convinced this is more practical than a notch — it just pushes notification icons to the middle rather than squeezing them to one side — but it looks cool.

The display itself can run at up to a very crisp 1440×3040 and is compatible with HDR10+ content, and as always for Samsung it's brilliant to look at and most impressive if you forget about accuracy and leave Vivid mode on.

Around back the finish on the phone is highly polished and reflective, with the silver model in particular easily standing in for a mirror. The downside, of course, is extremely high smudgability. Here you'll find the long-in-the-tooth rectangular camera array, except this time the three lenses are joined by a time of flight camera used to calculate distance.

The photography experience is a highlight of this phone, with the clean and clear app making it easy to grab excellent shots from the bank of cameras. Pictures from the main shooter are crisp and colourful with excellent shadow detail thanks to the automatic HDR. Shots from the 2x optical zoom telephoto lens are similarly impressive, although not as competent in low light as the main. Meanwhile ultrawide shots aren't spectacular, but come in handy if you need to fit a lot in. 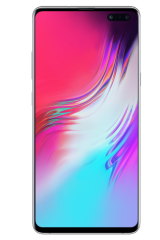 The front of the phone is almost all screen.

It's impressive how many features apply equally to selfies as well as the rear cameras, with the faux-bokeh portrait mode for example equally excellent at separating the subject from the background for both. You can also record video in 4K from either side (you'll probably want a selfie stick if you're doing it from the front), but if you want 60fps or super slow-mo you'll need to use the rear.

Under the hood Samsung's Exynos 9820 chip isn't as strong as the Snapdragon 855 you'd find in the American S10 or competing devices like the LG V50 or Oppo Reno, but paired with 8GB of RAM there's plenty of grunt to make for smooth navigation and fast big-screen gaming. Battery life is not excellent for a phone this high-end, but should get you safely through one day. Elsewhere Samsung's under-display fingerprint sensor is probably the fastest on the market, and the phone retains its IP68 waterproof rating, 3.5mm headphone jack and (less excitingly) its easy-to-accidentally-press Bixby Button.

Aside from Bixby, which I wish could be replaced entirely with another smart assistant of the user's choice, I do also have some lingering complaints about the way Samsung's software works. This is a very customisable take on Android 9 Pie, but also an overstuffed and confusing one. Some elements, like the brightness slider, volume controls and navigation buttons, work in a backwards way compared to every other Android system but can be reversed back to normal in the settings. Similarly the scale of app icons and text default to enormous, requiring you to dig around to fix it.

Some added elements, like the shortcut drawer you can pull from the side of the phone, are very handy. But then you'll run into all sorts of proprietary Samsung stuff like Finder Search, Bixby Routines and Customisation Service, or weird options that are on by default like Smart Alert and Edge Lighting.  Meanwhile useful settings are often buried under several layers of sub-menus and given odd unintuitive names.

Of course none of these examples will be issues if you're used to the way Samsung does things, only if you're coming across from a different brand of phone.

All in all this is a Galaxy S10+ made larger, given a nicer paint job and fitted with 5G capabilities and better depth perception for photography. That makes it an extremely nice phone, but the price is also extremely high. Unless you're hell bent on being on the 5G ground floor or getting that little bit extra screen real estate, you'll probably find one of the non-5G S10s makes for better value.