For the longest time the tech industry has had a nonsensical obsession with making devices thinner and lighter, at the expense of a bigger battery. Do consumers care about shaving off a few millimeters or grams if it means the device won't get you through a day of use?

Samsung's latest laptop, the Galaxy Book S, claims to have nailed the balance. Despite packing a 13.3-inch touchscreen display, full size keyboard and 4G connectivity, the $1699 device weighs less than 1kg with a frame that's just 11.6mm thick, and delivers a 'rated' battery life of up to 25 hours. 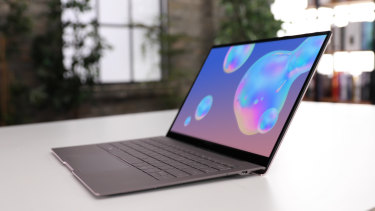 The Galaxy Book S is thin, light and powerful, but its ARM processor means you’ll want to stick to Microsoft Store apps.

On paper, this seems like a home run. But as is always the case when it comes to tech, the devil is in the details.

Unless you like to keep your display at uncomfortably low brightness levels and plan on watching videos all day on a remote island with next to no network connectivity, you're going to get closer to 12 hours of battery. In fact I was getting a little over 10 hours with the screen set to 30 per cent brightness and 4G connectivity enabled. That's still nothing to sneeze at but it's well below the 25 hour claim.

The Full HD LCD is plenty bright and holds up well outdoors, but it won't wow you with sharpness as much as the HDR-enabled OLED on Samsung's 2019 Galaxy Book 2 did. Unfortunately Samsung has stuck with a 16:9 widescreen display which, while great for movie watching, is far from ideal for doing anything else. The rest of the industry is steadily making the transition to taller 3:2 displays, which is superior for on-the-go productivity.

Samsung is also sticking with a fingerprint scanner for password-free login, which isn't as fast or consistent as the face authentication in competing laptops. 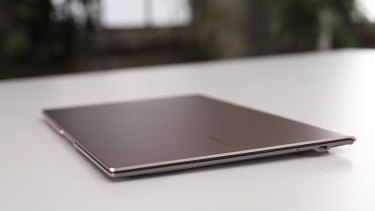 The Galaxy Book S has a single USB-C port, so you’ll want a dock at your desktop.

On the upside the speakers sound fantastic and the 256GB internal storage can be easily expanded via the microSD card slot. Sadly, there's no eSIM support so you're going to have to rely on a physical SIM card for connecting to network carriers.

The Galaxy Book S is the first ultrabook on the market to use Qualcomm's octa-core Snapdragon 8cx chip, which is comparable to the ARM-based processor you'll find on current flagship smartphones as opposed to an Intel or AMD x86 processor normally found on PCs. As long as you stick to using apps downloaded from Windows' Microsoft Store, performance is smooth and snappy.

Using an ARM-based smartphone architecture also means you get other perks such as always-on connectivity, where emails sync in the background even while the lid is closed, and instant-on so the machine is ready to go from the moment you open it. (Though it's worth noting that more recent Intel machines such as Dell’s XPS 13 2-in-1 are catching up in this department.)

The problem with ARM, as previously seen in Microsoft’s Surface Pro X, is that most PC-based applications and games aren't optimised for smartphone chips, so things you download outside the Microsoft Store either won't run or will cause a noticeable hit to performance and battery life. Having more than five tabs open on an x86 application like Google Chrome for instance slowed things down noticeably, while the ARM version of Microsoft Edge was super smooth even with more than 20 tabs.

For day-to-day productivity such as crunching spreadsheets, emails and using web-based applications and services on the go with 4G, the Galaxy Book S performs really well, and to be fair that's the type of user Samsung is chasing here. Just don't expect it to be able to run the same types of applications as other laptops in its price range.

The Hot List: Ghoulish goodies you need to create your own haunted house