Washington: In the flickering light of a distant sun, scientists may have discovered the first moon outside our solar system. 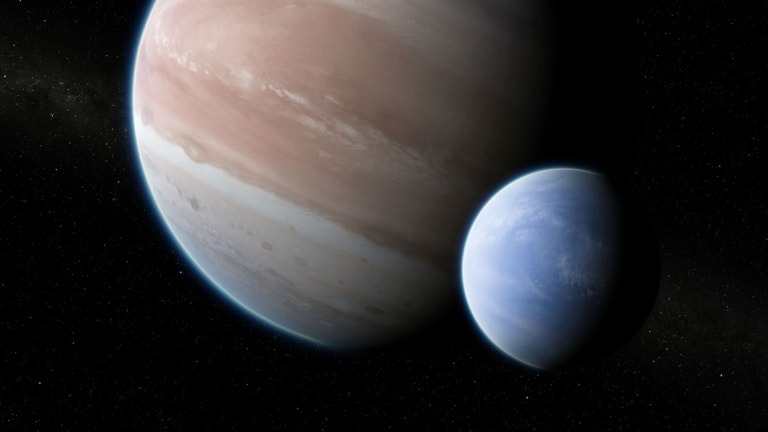 Exoplanet Kepler-1625b with a hypothetical moon.

It's an "extraordinary" find that "defies easy explanation" said co-author Alex Teachey – nothing like it exists in our own solar system. He and his colleague David Kipping are careful to call their discovery a "candidate moon", noting that more studies are required to confirm its existence.

But planetary scientist Kip Hodges, a deputy editor at Science Advances who was not involved in the study, called the Columbia astronomers' finding "compelling".

"If this finding stands up to further observational scrutiny, it represents a major milestone in the field of astronomy," Hodges said.

The possible moon was documented by Kepler, the powerhouse planet-hunting space telescope, when it cast a shadow by crossing in front of a star.

Kipping and Teachey discovered it among 300 exoplanets in Kepler's catalogue, all of which produce predictable dips in starlight that occur as an orbiting body passes in front of its sun – a phenomenon called a "transit".

Just one star, Kepler-1625, looked promising. The ageing sun-like star in the constellation Cygnus is known to host a huge, gas giant planet the size of Jupiter, known as Kepler-1625b. Yet there were weird signatures in the flicker of this far-flung star system.

So Kipping and Teachey asked for 40 hours of observing time with the Hubble Space Telescope, which is four times as precise as Kepler. These observations have to be done from space; the rotation of Earth means that ground-based telescopes spin away from their targets before they can capture a whole event.

The star's light appeared to fade more than an hour before its Jupiter-like planet transited. And it remained dim for a while after the planet's passing. They determined it wasn't a result of activity on the star's surface, and there was no evidence that another planet was tugging on Kepler-1625b and messing with its orbit.

Instead, it looked like Kepler-1625b was orbited by a second body the size of Neptune – roughly four times the diameter of Earth.

"A moon is an excellent explanation to the data at hand," Kipping said. "We are unable to find any other single hypothesis that can explain all the data we have."

Despite the evidence, Teachey stressed, "We are urging caution here.

"The first exomoon is obviously an extraordinary claim and it requires extraordinary evidence," Teachey said. "Furthermore, the size we've calculated for this moon, about the size of Neptune, has hardly been anticipated and so that, too, is reason to be careful here.

"We're not cracking open Champagne bottles just yet on this one."

Still, the astronomers were astonished by their discovery. A Jupiter-sized body with a Neptune-sized moon is unlike anything scientists have seen before. Kipping and Teachey weren't even sure how such a moon might have formed.

It may have been a wayward planet captured by the larger body. Or perhaps, like Earth's moon, it is actually a product of its planet, formed in some catastrophic collision. Or maybe its origin story resembles that of the moons of Jupiter, which are thought to have coalesced from a ring of gas and dust that circled the planet.

"It's raising new questions about the sort of the dynamical processes that go on to create the planets and moons," Teachey said.

Neither Kepler-1625b nor its moon are likely to be habitable, the scientists said, because both are made mostly of gas. If you could stand on the planet's surface, the moon would appear twice as big as our own, and would periodically block out the sun.

It's hard to say how common such worlds might be. Teachey noted that astronomy is biased toward finding bigger things – they're easier to spot. The first exoplanet discovered around a sunlike star, 51 Pegasi b, was a monstrous "hot Jupiter" that circled its sun every four days. It makes sense, Teachey said, that the first moon scientists spot would also be a giant.

Likewise, Teachey is not discouraged by the fact that only one of nearly 300 planets surveyed appeared to host a moon. Kepler is best equipped to find planets that orbit close to their stars, and analyses of orbital dynamics – not to mention the evidence in our own solar system – suggest that moons will be more common further out.

"If we want to do moon hunting in the future, we will have to look at planets further [than one astronomical unit, or the distance between the sun and Earth]," Teachey said. "We're learning new things, how to do these observations better."

That's what makes this work such fun, he continued – even if this moon's existence is not confirmed.

"If we had it all figured out, then we couldn't have much to do. We've still got lots of problems to work on."

Whether confirmed or not, the subject offers insight into how rare – or how common – our own solar system might be.

Moons are abundant in our own solar system, with close to 200. Of the eight planets in our solar system, only Mercury and Venus have none.

"If confirmed, this finding could completely shake up our understanding of how moons are formed and what they can be made of," NASA's science mission chief Thomas Zurbuchen said in a statement.

What Is Netflix's 'The Witcher' About?

Military writer, 53, hanged herself beside love letter to her husband