Home » Technology » Season’s cheatings: how our smartphones are being used against us

Forget the silly season, it’s more like the scamming season. If you recently received an SMS, purportedly from Australia Post, saying your parcel is being held in a distribution centre due to outstanding shipping costs, you’re not alone. Here’s hoping you didn’t do what I did next: click on the “track your package” link before realising with a thunderbolt – d’oh – that it’s a scam. The scam alerts page of the Australia Post website warns that these fake SMSs (there are several versions) “can look like a legitimate Australia Post text message”.

Although I exited the fake site as soon it began to load, it may still have been too late to prevent information being hijacked from my phone. “We strongly advise people against clicking any links or making any payments, and deleting the SMS,” cautioned a spokesperson from Australia Post, which will handle more than 40 million parcels this month alone. 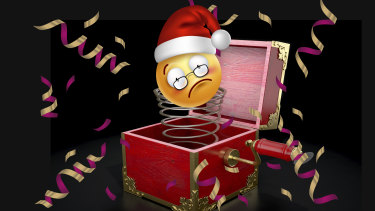 Nasty surprises are popping up in all sorts of guises as scammers target as many people as possible.Credit:Getty Images

In case you didn’t get the memo, our smartphones are being weaponised against us by scam operations, often based in vast call centres in Africa and India, which amp up in the pre-Christmas rush, according to Fiona Cameron, chair of the Scam Technology Project at the Australian Communications and Media Authority. “It’s not called phishing for nothing,” she quips. “They’re fishing for as much information about you as possible, using fake IP addresses, emails and phone numbers.”

Some of the most successful phishing scams, such as the one targeting Australia Post customers, try to duplicate the online livery of a trusted organisation. After clicking on the link, you’re taken to a fake website with the company logo, asking you to verify your address and enter your credit card number for payment. The nine out of 10 Australians who own a smartphone are vulnerable, says Cameron, who has just completed an investigative report into scams. The report will be delivered to Paul Fletcher, the minister for communications and arts, before Christmas.

“It’s a numbers game,” notes Cameron. “The scammers target as many people as possible, who at this busy time of year are less likely to check the web address of a message coming through on their phone.”

Heavy rain to fall during both commutes in Northeast

‘Bachelor In Paradise’ Recap: Love Triangles Get Heated & Several Couples Are Put To The Test

Ex-officer to be sentenced for murder of African-American teen

Russian killer who murdered ‘immoral women’ has total raised to 78