SINGAPORE – Singapore is the smartest city in the world for the third year running, according to this year’s Smart City Index.

Published by Swiss business school Institute of Management Development (IMD) and the Singapore University of Technology and Design last Thursday (Oct 28), the index ranks 118 cities by how “smart” they are.

A “smart city” is an urban setting that applies technology to enhance the benefits and diminish the shortcomings of urbanisation for its citizens.

The Smart City Index takes into account input from the cities’ residents of how technology had improved their lives. About 120 residents from each city were surveyed in July this year.

Dr Bruno Lanvin, president of IMD’s Smart City Observatory, told The Straits Times that Singapore’s achievement is largely due to the policies it pursued at both the city and national level – particularly in e-government services, education and human-centric urban strategies.

Dr Lanvin noted that the Republic had gone through the Sars crisis and was better prepared to face the current Covid-19 pandemic as compared to other cities around the world.

“Its higher degree of social cohesion was also a factor, as well as the availability of digital facilities (typically apps) that allowed the close monitoring of how the virus was circulating,” he said.

But it is still too early to infer from the findings how the pandemic had impacted the survey participants in Singapore, he added.

He did not reply questions on how IMD’s evaluation of the city’s ranking was affected by Singapore’s handling of migrant workers during the pandemic this and last year, which attracted criticism locally and internationally.

Participants in each city were asked questions on their ideas of existing infrastructure and technological provisions and services available to them. These were broken down into five key areas: health and safety, mobility, activities, opportunities, and governance.

Survey participants were also asked to select five out of 15 priority areas, such as affordable housing or health services, for their city. Other questions posted to the residents included: “Do you feel the availability of online information has increased your trust in authorities?”

For this year’s rankings, the final score for each city was computed using the answers from residents surveyed this year and in the past two years, with the most weight given to recent replies and the least to those recorded in 2019. 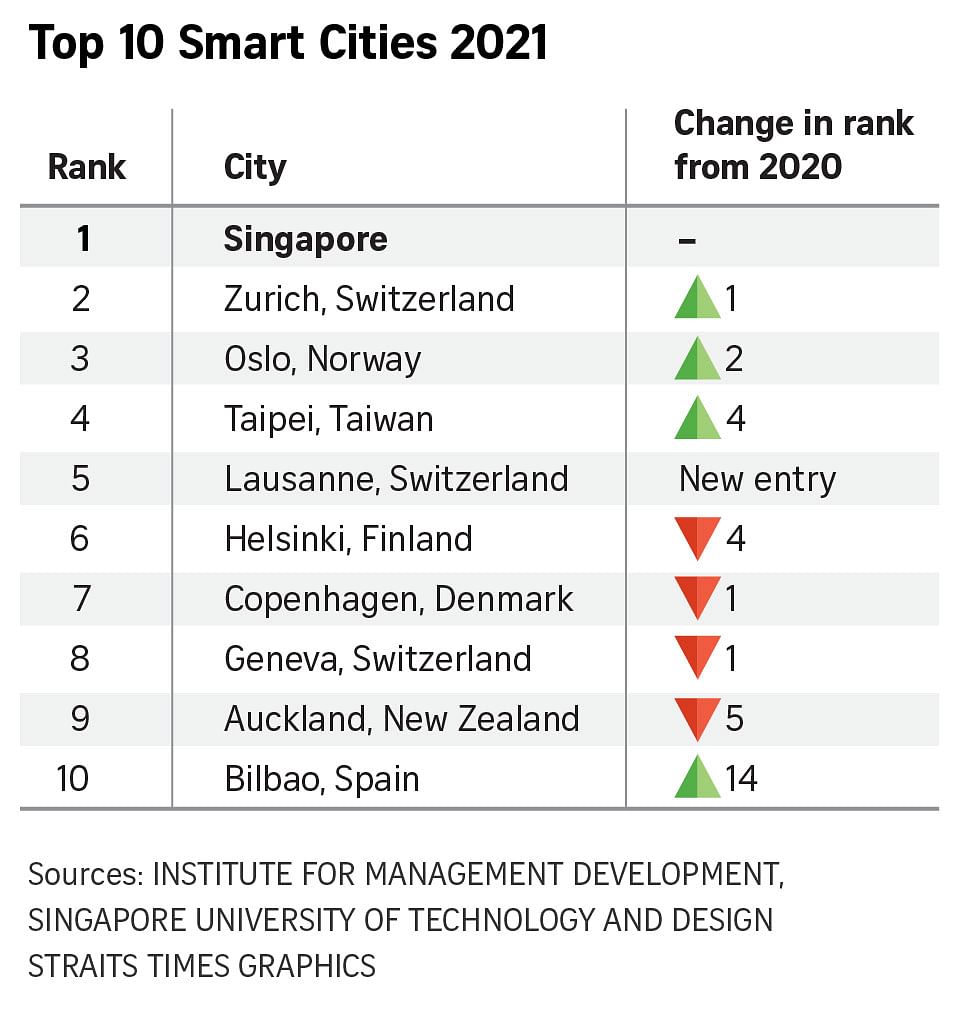 This method helps to reduce excessive variability throughout the years because of the occurrence of specific events, said Mr Christos Cabolis, chief economist and head of operations at IMD’s World Competitiveness Centre (WCC).

“It also helps to take an ‘average’, so to speak, for the period between the two times that the residents of a city were sampled,” he said.

The rankings also takes into account economic and social data taken from the UN Development Index, which ranks countries on the basis of health, education and living standards.

More on this topic

The team behind this year’s Smart City Index said the findings showed that the top concern worldwide is access to affordable housing.

But access to better air quality and health services has become a greater priority in cities worldwide since the Covid-19 pandemic occurred.

“Clearly, Covid-19 has changed the ways in which leaders and citizens of smart cities view the challenges ahead,” said Professor Arturo Bris, who is director at the WCC.

“Environmental emergencies will also remain very high on the agenda of smart cities, and this is an area in which citizens’ expectations – and sometimes ambivalent attitudes vis-à-vis technology – will need careful attention.”

Join ST’s Telegram channel here and get the latest breaking news delivered to you.

Prince Harry and Meghan Markle Have an 'Exaggerated Idea' of How Important They Are, Royal Expert Says

Macron on brink: French president accused of ‘contempt’ amid rash of attacks on MP offices