Home » Sky vs BT vs Virgin Media: Best and worst providers revealed – how does yours compare? 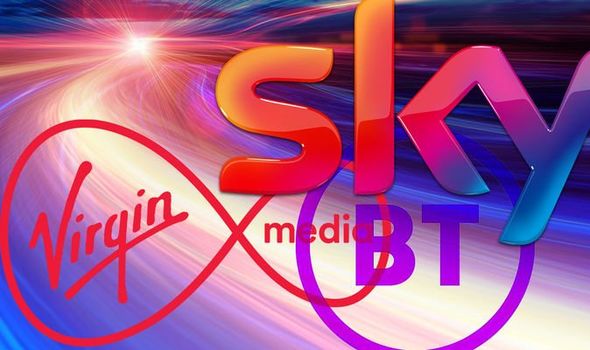 Sky, BT and Virgin Media are among the telecommunications giants to have their service rated in a new study. Ofcom – the UK’s communicators regulatory – has revealed latest stats for the number of complaints broadband, TV, mobile and landline customers made during the final quarter of last year for each provider. Besides Sky, BT and Virgin Media firms such as Vodafone, EE, Plusnet and TalkTalk featured in the study.

And if you’re a Sky customer, you may be feeling a little bit smug looking at how services from rival firms like BT and Virgin Media fared.

The study, which gathered data between October and December 2020, found Sky had the second lowest amount of broadband complaints.

Sky had just seven broadband complaints per 100,000 subscribers, which is just behind EE who had six.

BT, meanwhile, had 14 complaints per 100,000 – which is not too far from the industry average of 16 for this market segment.

While Virgin Media and Vodafone were the worst performers on 23 and 30 complaints per 100,000 customers.

Drilling down a bit further into what type of complaints were made, Ofcom said: “Almost half of complaints across fixed broadband providers were about faults, service and provisioning issues (49 percent). The other main drivers were complaints handling (23 percent) and issues relating to billing, pricing and charges (15 percent).”

In terms of complaints regarding pay TV services, the Ofcom study pointed to one clear leader – with Sky in front again.

Sky recorded the lowest level of pay TV complaints in the final quarter of last year, with just one per 100,000 subscribers.

Virgin Media received the most amount of complaints – 12 per 100,000 with BT the second highest on eight.

TalkTalk, meanwhile, had five pay TV complaints per 100,000 which is also the industry average.

Ofcom said the biggest overall issue was to do with complaints handling, which made up almost a third (30 percent) of complaints across providers.

The next highest recorded complaint was to do with issues relating to faults, service and provisioning followed by billing, pricing and charges grievances.

With the other two categories – landline phones and pay monthly mobiles – Sky once again performed favourably.

On the landline front, Sky received the second lowest amount of complaints with EE the best performer.

BT was ranked third best in this category with Vodafone getting the most complaints.

For pay-monthly mobiles, the top performer was Tesco followed by Sky Mobile, EE and O2.

While the worst performers were Three and iD Mobile who received the most amount of complaints.

Discussing their findings as a whole Ofcom said: “The data in this report, gathered during October-December 2020, covers complaints we received during the initial period of the second national lockdown. Although schools and places of further education remained open in the last quarter of 2020, many people were required to work remotely where possible.

“Last quarter (Q3 2020), as providers’ operations recovered and call centre capacity increased, we saw complaints to Ofcom across all services return to volumes comparable to those prior to the coronavirus pandemic.

“In Q4 2020 we received similar complaint volumes to those in the preceding quarter. Complaints about fixed broadband continued to increase, as they did in Q3. However, complaints about landline and pay TV services were broadly steady and there was a drop in complaints about pay-monthly mobile.”

VICTORIA BISCHOFF explains how coronavirus could affect your holiday

The Spring Trends Taking Over in 2021, According to Experts

‘Messiah’ Canceled By Netflix After One Season