Home » Technology » Summer sizzles speakers: how to keep your tunes safe in the sun

If the ads are anything to go by, now is the time of year when people pack up the car with an Esky, an insufficient amount of sunscreen, two surfboards, six models and a Bluetooth speaker, and head down to an empty beach.

Not me, I will be enjoying the great indoors because my pale skin makes Casper the Friendly Ghost look tanned and I’m afraid the way it reflects the sun may blind innocents. But back in the days when I did venture out into the world in summer, I learned several valuable lessons the expensive way. 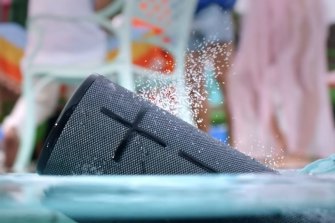 A Bluetooth speaker in lighter colours, or better yet a waterproof one you can dunk in the Esky, will help keep your tunes alive.

The biggest thing I realised about summer was the weather forecast is not likely going to be the temperature you and your outdoor tech experience.

The Bureau of Meteorology uses thermometers shaded in a box known as a Stevenson screen. It’s painted white to reduce heat absorption, it’s away from buildings and trees to avoid heat reflection, it’s 1.2m off the ground over grass instead of concrete (there can be as much as 7 degrees difference between the ground and 2 metres up), and has louvres to allow good airflow. Basically, those thermometers are as comfortable as you wish you were on a summer’s day.

If only I’d known that when I got my first Bluetooth speaker, just this side of forever ago, and put it on my parents’ almost black concrete deck, near a very white wall, on a very hot day so I could listen to music while I built something in the backyard. While those thermometers might have been feeling fine at a well-ventilated 35 degrees, the speaker felt the fires of hell lapping at its cheap black plastic and inner glue.

It wasn’t long before the dulcet tones of Tegan and Sara started to sound a bit off, and then stopped sounding at all. I can still remember the burn on my fingertips when I touched it to see what was wrong. This wasn’t like the time I ran over my original iPod with a ride-on mower and brushed it off and continued listening, this was terminal.

I put the speaker in the freezer to try and cool it down as quickly as possible, which was absolutely the wrong thing to do. Sudden changes in temperature are no one’s friend.

That’s probably why the folks at Sonos emphasised that its new portable Move speaker had been tested in an oven. If you leave your gadgets in a hot car over Christmas, you’re basically ovening them, and most will not fare as well.

However, you don’t need to buy a $650 portable speaker to make sure it doesn’t die in the Tartarus-like conditions that are the Australian summer, and you don’t need to build a Stevenson screen to enjoy your music al-fresco (though it’s not a terrible idea).

If you’re in the market for new outdoor tech, consider getting it in a lighter colour. Not white, because that will yellow and get dirty, but something that doesn’t absorb so much heat. Also put it in some shade, preferably over grass instead of concrete, and consider raising it up a bit.

Putting it in an old esky with an ice pack and the lid off under an umbrella won’t just keep it cool, but it’ll give it a little extra oomph. Or go for a waterproof speaker like the Ultimate Ears range and give it a dunk every now and then (preferably in cool, fresh water).

And for the love of delicate cabling and thin bits of plastic, don’t keep anything you care about in a hot car.