Microsoft could be planning something truly special for its next entry in its popular Surface Pro line of two-in-one convertibles. The so-called Surface Pro 8 could ship with a new Type Cover with an in-built solar panel to keep everything ticking along – without the need to keeping topping-up the battery with a wall plug, a new patent reveals.

The patent was first filed back in 2018, but only recently made public. That suggests Microsoft has been thinking about – or working on – the idea for some time. And most exciting of all, it could mean the finished product is almost ready to ship.

Included alongside the description of the as-yet-unreleased gadget are a number of simple line drawings that appear to show a two-in-one that resembles the existing Surface Pro line, most recently updated with the Surface Pro 7 late last year.

Like the existing Type Cover, the one illustrated in the patent looks set to provide extra balance and stability when using the tablet in a laptop-like set-up. It will also have an integrated QWERTY keyboard. It’s unclear whether it will have the small recess to house the new flatter-style stylus – instead of sticking it to the side of the device using magnets, like we’ve seen on previous entries in the Surface Pro range.

When closed away – as well as protecting the PixelSense touchscreen from any scratches and scuffs – the back of the Type Cover will include four separate solar panels to recharge the batteries from a light source, the patent claims. Interestingly, this will not only work with the sun, but can also boost battery life using artificial lights. 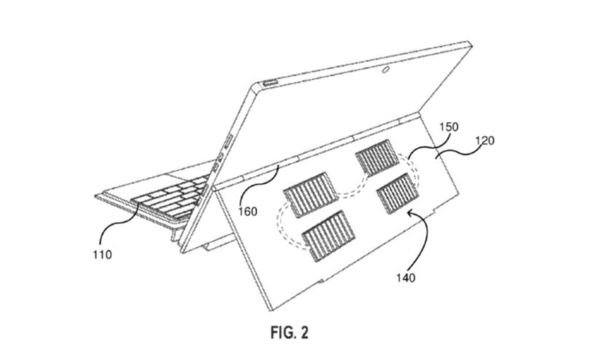 That means you’ll be able to fold away your Surface Pro Type Cover and leave it on your desk, only to come back and find the battery has topped itself up. It could also be a lifesaver at an airport, when you’re scrambling around for a charging point amongst a sea of boozy teenagers charging smartphones so they can SnapChat their friends one last time before their flight to Zante.

Whether Microsoft manages to successfully integrate these panels into its Type Cover without compromising the weight and bulk of the Type Cover remains to be seen. However, it could be a real game-changer and set the Surface Pro 8 well ahead of similarly designed rivals from the likes of Lenovo, Huawei and Apple.

Microsoft could also make the technology backwards compatible, so you could buy the new Type Cover for an older device (maybe an ageing Surface Pro that is starting to lose its ability to hold a charge).

As always, we’d urge you not to get too excited about this idea. Vast multi-national companies like Microsoft patent new ideas and technologies all the time – and only a small portion of these ever manage to escape the R&D laboratory. While the solar panel-powered Type Cover sounds like a truly transformative idea, Microsoft might not be able to make it work on a finished product.

If you’re interested about how the latest and greatest devices from the Microsoft Surface team stand-up to tests, read our in-depth Surface Laptop 3 review here.

Always in Search of Happy Endings