When the Apple Watch Series 7 was announced earlier this fall, I have to admit I was a bit underwhelmed.

Previous iterations of the smartwatch had debuted new heath-focused features that seemed important—think the Series 4’s ECG app and fall detection or the Series 6’s SpO2 scan and sleep tracking—but the Series 7 boasted no such additions, instead launching with a newly reengineered display and other less headline-worthy changes, like a QWERTY keyboard for texting and fast-charging capabilities. Not every year can come with a massive health innovation, I conceded, and tempered my expectations for the upcoming wear test and review.

Then, I actually got my hands on (or, more accurately, my wrist through) my Series 7 test unit for a week-long trial. I’ve been reviewing fitness trackers and smartwatches for going on a half-decade now, and this was the biggest example of “you won’t know until you try it” I’ve yet come across in my career. The Series 7 is perhaps the most easily usable smartwatch I’ve ever tested, and a testament to the idea that functionality can trump flash when it comes to the actual everyday experience with your devices.

The biggest change to the Series 7 comes in the reengineered display. Apple expanded the size by 20 percent and slimmed down the borders at the edge of the screen and made the edges of the casing rounder. This doesn’t sound like a vast departure from one model to the next. When I looked at static images of the device when it was announced, it was hard to see much difference from the iterations of the Watch I’ve been wearing for the past few years.

My Series 6 had a 44mm case, while my Series 7 is a 45mm (in the new green color). There’s not a huge difference in terms of how the devices feel on the wrist weight-wise and how the screen appears at a quick glance without activating the display. But the expansion became immediately noticeable from the first time I looked down at my wrist to check the time or my heart rate. Yes, this might sound obvious when it’s spelled out here with the numbers at hand—a bigger case should yield more screen size—but the Series 7 packs in so much more functional space into such a relatively small area that it feels remarkable. Usually, when I move up to a bigger watch screen, I feel it on my wrist with a heavier, clunkier device. That’s not the case here. The design also allows full-screen watch faces and apps to appear to slide right into the curvature of the casing, which expands the area even more depending on what you’re doing. Even with these changes, all of Apple’s various bands still work on the Series 7.

Looking at the devices next to each other is the biggest tell in regard to just how much bigger Series 7 display is compared to the Series 6 (and down). Check this out to see how the Series 7 measures up against the Series 3 and Series 6. 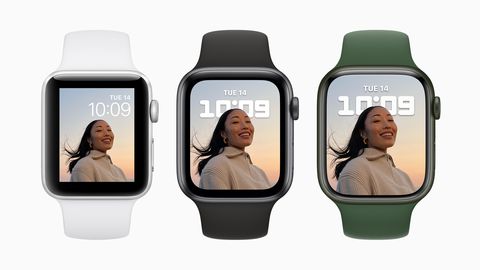 There’s no way to really measure how this change affects the user, but I felt it. I didn’t have to think as much when I engaged with the Watch. Swiping around on the screen to set timers or start activity tracking was less onerous, and checking the clock during my workouts was less a full turn of my wrist and more a quick glance down as I continued to sweat.

This is a classic Apple move—make something that works really well, then use a product update for a tweak that takes advantage of a small design wrinkle to make it work even more seamlessly. The expanded display can be particularly helpful for people who have issues with their eyesight; the Series 7 offers two new larger font sizes, which you’re prompted to choose when you set up the device (you can also change the settings at any time).

While each new addition in the Apple Watch line claims to be the most powerful yet, battery life remains a sore spot compared to other smartwatches, which have begun to count their capacity in days instead of hours.

The Series 7 boasts the same 18 hour power estimate as the previous generation, but there is a new fast-charging capability with the USB-C cable that comes in the box (you’ll have to provide your own USB-C brick). Apple says it powers up your Watch 33 percent faster than the Series 6.

That might not mean much to you, so I’ll give a quick anecdote about how this actually affects your use IRL. I wore the Series 7 over a day and night, getting roughly or just over 18 hours of juice, then received an alert that I should charge the device before going to sleep. I was already in my bedtime routine, so I thought I might not be able to get enough juice before lights out—but I put the Watch on the charger while I took a quick shower. In the just under 15 minutes I was in the bathroom, power went from 29 percent to 61 percent. Plenty of juice for a snooze, and something that would absolutely not have been possible with an older model. I’ve been much less preoccupied with charging with the Series 7. 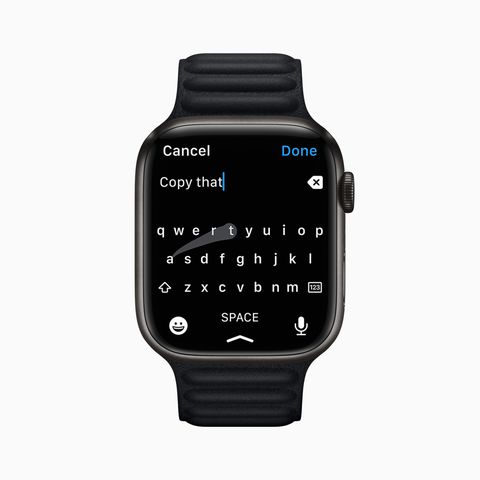 One new function that’s particularly useful is a full QWERTY keyboard, which finally gives you the chance to type out responses to text messages directly on your wrist using the Watch instead of just pre-programmed messages. I was surprised just how usable this feature is, especially compared to other tiny keyboards I’ve struggled to spell on with my beefy fingers in the past.

You can use the same swipe-to-type functionality as the iPhone (official name: QuickPath), and I quickly adjusted to the learning curve. The Scribble feature, which allows you to spell with your finger, is a little tougher, but it’s a fun way to send a message. These functions will be a godsend to anyone bored in a meeting or in a classroom—you don’t even have to pull a device out of your pocket to shoot a message to your friend a few seats over. Sorry, bosses and teachers.

The Series 7 Takes to the Road 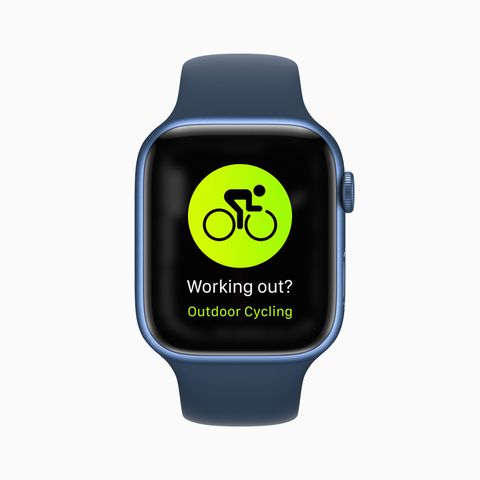 The Series 7 remains a solid if basic activity tracker for fitness buffs. The reengineered screen is especially useful here, as I mentioned, so checking your stats on your wrist is less likely to pull you out of your zone. There are two new Activity types, Tai Chi and Pilates, that I didn’t have a chance to test. I used the device mostly for weight lifting, HIIT, cycling, and spin workouts, and had no issues.

The new cycling features with watchOS 8 are a solid improvement and welcome addition, although I’m more of a casual rider to get from Point A to B than a bike fiend. That said, I almost always forget to track my rides, so the new auto-detection capability was particularly valuable.

The Series 7 Proves Function Is as Important as Flash

The big question then, is the Series 7 worth its $399 price tag? That depends. If you have a Series 6, you have most of the smartwatch’s big-ticket features on your wrist already: ECG app, sleep tracking, Sp02, etc. The improvements to the wearable’s functionality are real, but that might not be enough to sway you to upgrade if you’re not the type of person who pre-orders every new release from Apple each fall.

If you have an Apple Watch that’s a Series 5 or older, however, this should be a no brainer if you’re on the fence about getting a new device. The Series 7 gives you all the new features and a greatly improved user experience. Unless you’re a true outdoor die-hard who needs weeks of battery and high-end mapping tools, the Apple Watch line remains the top smartwatch on the market for the general user (if you own an iPhone, that is).

I’d go further and say that the Series 7’s new features, while outwardly not as sexy as a hyped-up new sensor, are arguably more important if you want to make the most of your wristwear since they’re immediately helpful with everything you use the Apple Watch to do. I’m glad that my smartwatch is equipped with fancy bells and whistles that can help me in the event of a health emergency, but I’m just as concerned that the Series 7 works well for me on the days of my life that I won’t ever remember.

Vandalism of Manitoba RCMP memorial shows anger, but not a hate crime: Expert