Feel like heading off the beaten track for a good-old fashioned adventure, but don’t want to give up on your home comforts? Opus have just released a tough off-road trailer that expands into a surprisingly spacious family-size camper once you’ve parked. The deceptively large Opus OP 15 Hybrid Caravan is made from hard-sided panels which pop up and slide away, creating a space capable of sleeping up to four people.

Compact and robust when it’s being towed, the OP 15 features a pop-up roof for additional headroom, and a rear end that extends to allow for a far roomier interior cabin. Inside the trailer, there’s a perfect family setup, with a king-size bed on one side, and twin bunk beds on the other. There’s also a leatherette dining area and a family bathroom with a shower, sink and chemical toilet. Hot water, heating and air conditioning are included as standard.

When it comes to cooking, Opus figured that campers would want to do it al fresco, and so the OP 15 includes a large fridge and freezer which slides out of the side of the trailer, and a fully equipped exterior kitchen featuring a stainless steel stove, sink and storage. 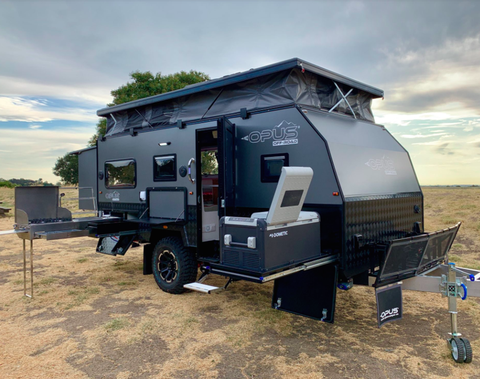 “An articulating hitch sits at the end of a galvanized steel chassis to tackle the roughest roads with ease,” reads the official description. “Underneath there are twin shock absorbers and trailing arm independent suspension for each wheel.”

And because “off-road” often tends to mean “off-grid,” the whole thing is powered by three 100ah AGM batteries, which are linked to a 300watt solar system that you can trust to keep you going.