Gig economy platforms such as Uber, Deliveroo and Airtasker face new minimum standards over how they treat their workers as the Victorian government moves to beef up protections in the growing sector.

The Victorian government has released 28 draft minimum standards that include giving workers their pay rates in writing and providing an appeal mechanism for employees removed from a platform. 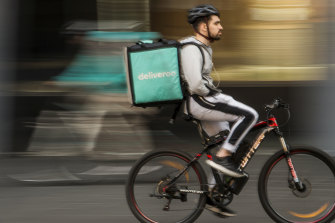 Food delivery gig economy platforms boomed during lockdowns but the industry struggled with a spate of deaths in 2020.Credit:Steven Siewert

The draft standards make Victoria the first state to move on regulating the gig economy, a growing sector in which big technology platforms offer workers the freedom of choosing their hours as independent contractors but have no minimum wage, workers’ compensation or paid sick leave.

Former Fair Work Ombudsman Natalie James had recommended the establishment of the proposed standards in a 2020 report on the gig economy, which found many workers were young or migrants and lacked bargaining power.

If the draft standards, which were released just before Christmas, are successful it will put pressure on other states and the Commonwealth to follow. So far, they have taken a largely hands-off approach to the gig economy with the exception of safety work in NSW.

Under the draft rules, the platforms would be required to commit to provide “fair and decent” pay and conditions, which the Victorian government says could be achieved by publishing typical average take home earnings benchmarked against the minimum wage of $20.33 per hour.

Major gig economy companies Uber and Mable, which is a marketplace for NDIS and aged care services, welcomed discussions on the draft standards, which are open for feedback until early next month.

“More than 100,000 Australians choose to earn with Uber, and they tell us flexibility is the number one reason Uber works for them,” an Uber spokeswoman said, citing company surveys.

“We want to work with governments to ensure independent work is quality work, while preserving the flexibility and autonomy drivers and delivery people value.”

Mable welcomed the process but emphasised its difference from services such as Uber and Deliveroo, saying its providers set their own terms of work, though they are constrained by the market.

“The majority of the proposed standards, as written, appear to apply only to vertical platforms where the platform is dictating the terms of engagement,” said Mable’s chief executive, Peter Scutt. He said they were less applicable to companies such as Mable as a result.

Transport Workers Union senior official Nick McIntosh welcomed the Victorian government’s move to create standards. But he said there needed to be an independent body to enforce rules and let workers bargain collectively.

“Without these critical features, the Victorian government risks exacerbating the serious problems with safety and workplace conditions which make gig work so deadly,” Mr McIntosh said.

In a covering statement, the Victorian government said it expects the industry to put the standards into place to begin with, and signalled it could legislate or take administrative steps if companies do not comply. A government spokesman did not directly answer questions on how it might enforce the standards, instead saying they were being developed in line with Ms James’ report.

University of Technology Sydney labour law professor Joellen Riley Munton said the standards were on the right track, but enforcement was an open question. The federal government has responsibility for most law covering pay and work conditions for both companies and independent contractors, making state legislation tricky, Professor Riley Munton said.

But the Andrews Victorian government has a history of using innovative legal schemes to tackle labour problems, such as its 2018 labour hire laws that used business licensing powers and its use of the criminal law to crack down on the most severe underpayment cases.

“What you ultimately need is a quick and cheap system for people to check whether there has been compliance,” Professor Riley Munton said.

The office of Victorian Industrial Relations Minister Tim Pallas, as well as Airtasker and Deliveroo, were contacted for comment. Ms James, the former Fair Work Ombudsman, declined to comment.

China, Russia bolster ties to counter US as tensions rise

When Will Joe Jonas & Sophie Turner Get Married? It Could Be Sooner Than You Think