Home » Technology » Use Chrome? You must not ignore this urgent warning from Google 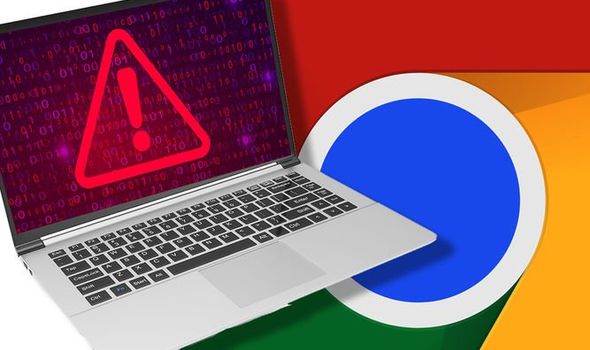 Billions of Google Chrome users are being urged to update their web browsers without delay. This latest alert, which comes directly from Google, was issued after a number of new threats were discovered that could leave PCs open to attack from hackers.

Although it’s pretty common for bugs to be found and patched throughout the year, what makes this latest alert more concerning is that two of the problems found by the cyber team at Google have been given the dreaded ‘zero day’ rating.

If you weren’t already aware, zero-day warnings are every gadget owners worst nightmare. That’s because these alerts mean it’s possible – and highly likely – the bug is already known to criminals and hackers, who are almost certainly using the glitches in attacks right now. That’s why Google has rushed to release this new patch so quickly.

These have now been fixed, but only if users update their Chrome browser.

Confirming the upgrade, Google said: “The Stable channel has been updated to 95.0.4638.69 for Windows, Mac and Linux which will roll out over the coming days/weeks. We would like to thank all security researchers that worked with us during the development cycle to prevent security bugs from ever reaching the stable channel.”

The firm won’t disclose more about the flaws until it’s certain that the majority of users have upgraded their browser, but it’s clearly serious so don’t delay in making sure your PC is up to date.

If you use Chrome then it’s worth checking that your Windows 10 PC, Mac or Chromebook is running the latest software. To make sure things are fully up to date, simply launch your browser, head to Chrome in your menu bar and tap “About Chrome.”

Here you’ll see which version of Chrome you are running and whether things need to be updated. If you’re not running the latest version you’ll be asked to upgrade and then restart your software.

This latest Chrome alert comes after similar issues were discovered back in October and September with zero-day flaws also fixed in those two releases.

Avast is one of the most popular antivirus providers around now. The security experts offer a free antivirus tool, but if you want the best protection you’ll have to pay for a more comprehensive product. Thankfully, Avast is offering big savings on its antivirus tools right now – with savings of up to 48 percent available.

ESET lets you customise its antivirus offering to suit your needs. While other providers have prices for a set amount of devices (i.e one, five, 10) ESET lets you manually input how many devices you want a license for. Prices start from £39.90 for one device.

Malwarebytes Premium offers 24/7 real-time protection from malware threats, blocks ransomware attacks and protects you from malicious websites. You can get a one year license for one device for £29.99. If you get a two year license you’ll be able to save 25 percent on the price of the second year.

Trend Micro has a range of cyber security products available. The Windows security products are priced from £19.95, while its Maximum Security offering (which provides support for three devices) costs £48.97 for one year. This is a saving on the usual price of £69.95.

Like Avast, AVG offers a free antivirus tool. But if you want the most comprehensive protection on offer you’ll have to fork out for one of AVG’s paid-for products. Prices start from £29.99 for AVG Internet Security. This is for a one device license and usually costs £49.99.

Right now you can get a 25 percent saving on Sophos Home. The security solution – which protects up to 10 Windows and Mac devices, as well as an unlimited amount of Android and iOS phones and tablets – usually costs £49.95 for a year. But the price has been slashed by a quarter to £37.46.

Bitdefender is offering a huge saving on its antivirus products. Prices start from just £16 for a year’s worth of antivirus protection. This is for Antivirus Plus, which can be used on three devices and usually costs £39.99. The deal running at the moment marks a saving of over 50 percent (£24).

McAfee is one of the most recognisable antivirus names around, being first founded 34 years ago. So if you choose a McAfee product you know it’s been made with decades worth of experience. Prices for McAfee Total Protection start from £24.99.

Sophia Loren And Edoardo Ponti Talk Bonds Of Family, Filmmaking And ‘The Life Ahead’ – Contenders International