Despite rumours that a merger is in the works, Apple chief executive Tim Cook believes mobile devices and desktop computers should remain in separate worlds with their own bespoke operating systems.

Following a recent Apple event in Chicago, where the tech giant outlined its plans for a renewed push into the education sector, I had the opportunity to briefly talk with Cook. 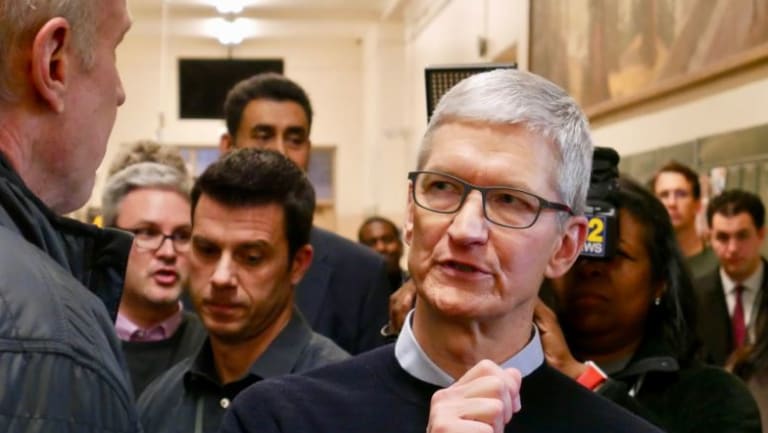 As we set up, I mentioned the first computer I’d used back in primary school was an Apple IIc, and that technology had certainly come a long way since then. Down the hall, students were racing drones, playing virtual instruments, and dissecting augmented reality frogs on Apple’s latest mobile devices.

Cook tells me the Apple IIc was his first computer, too. "I first used it for a project, as a senior in engineering school, making an inventory control program or for a rental business that was close by." Prophetic, for the man in charge of Apple’s supply chain for so many years.

Cook speaks slowly and deliberately, as one would expect of the CEO of the most profitable company on the planet. It is not just the sharemarket that makes him tread carefully, he must also feel the weight of countless Mac pundits who interpret his every word for clues about the future leanings of the famously secretive company.

When Cook off-handedly mentioned he used the iPad as his main device in a few years back, thousands of blogs declared the Mac must be facing certain death. Apple's fans have always had a flair for the dramatic.

Either way, at an event to celebrate the iPad, I asked him if the iPad was still his main device.

"I generally use a Mac at work, and I use an iPad at home," Cook tells me, "And I always use the iPad when I’m travelling. But I use everything and I love everything."

Later, when I ask about the divide between the Mac and iOS, which seems almost conservative when compared to Microsoft’s convertible Windows 10 strategy, Cook gives an interesting response.

"We don't believe in sort of watering down one for the other. Both [The Mac and iPad] are incredible. One of the reasons that both of them are incredible is because we pushed them to do what they do well. And if you begin to merge the two … you begin to make trade offs and compromises.

"So maybe the company would be more efficient at the end of the day. But that's not what it's about. You know it's about giving people things that they can then use to help them change the world or express their passion or express their creativity. So this merger thing that some folks are fixated on, I don't think that's what users want."

A surprising comment, considering rumours from well-connected Apple analyst Mark Gurman of Bloomberg, who wrote the company is working on a project called "Marzipan", which involves merging the codebase of macOS and iOS apps.

"Starting as early as [2018]," Gurman writes, "software developers will be able to design a single application that works with a touchscreen or mouse and trackpad depending on whether it’s running on the iPhone and iPad operating system or on Mac hardware, according to people familiar with the matter."

Of course, Gurman’s report could still be accurate. There is a huge leap from iOS and macOS sharing developer tools — a move that could open Mac app development up to thousands of iOS developers — to macOS running iOS apps, ala Windows 10. Following Cook’s comments, the former sounds far more likely.

This Day in History: Dec. 9

Hopes quarantine could be cut to a week