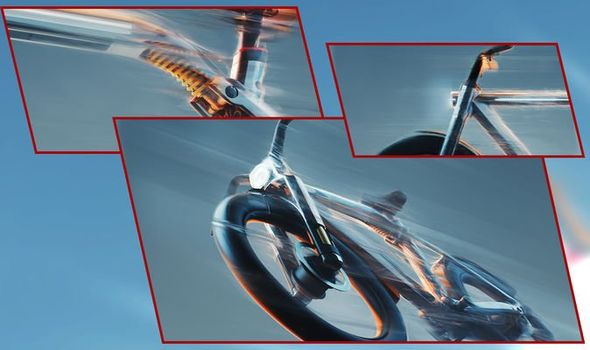 VanMoof has revealed its next-generation electric bike, which the company has branded its “first hyperbike”. What does that mean? Well, in a nutshell, it means it’s going to be fast. Like, really fast. VanMoof claims its latest bike, known as the VanMoof V, will be able to hit top speeds of 31 miles-per-hour (50km/h).

That’s so speedy that it could actively cause problems for the Dutch electric bike manufacturer. UK law currently restricts all pedal-assist electric bikes to a maximum speed of 15.5mph. As soon as you reach that speed, the motor won’t engage. So, you can blast downhill, hunched over the handlebars like a Tour de France cyclist, pedalling as fast as you can – but don’t expect any extra oomph from the motor. You’ll be riding on elbow grease alone.

Since the VanMoof V won’t start shipping until late next year, it is possible that situation changes and commuters will be able to use the motor at those higher speeds. If so, VanMoof hopes its new electric bike will work as a car replacement for those living in built-up urban areas. It believes the faster speeds and extended range will make it perfect for longer commutes. Unfortunately, VanMoof is being a little coy about the exact specifications of this new bike. It has revealed that it will sport a 700 Wh capacity battery, but it hasn’t confirmed the exact range. For comparison, VanMoof S3 has a 504 Wh and an estimated range of 37-93 miles (60-150km) between charges.

Rough calculations on the back of a beer mat suggest that VanMoof V could power through journeys over 120 miles without the need for a recharge, which would be more than enough to replace a car for most city-dwellers. However, we’ll need to wait for official confirmation from the company before we know what to expect.

It’s also worth noting that VanMoof sells a PowerBank accessory to increase the range, but it’s unclear whether it will be compatible with the VanMoof V.

Regardless of the exact numbers, it does seem like VanMoof V is designed for longer rides than its current line-up. And to improve those long journeys, the V arrives with a completely redesigned frame that includes front and rear suspension – a first for a VanMoof-branded electric bike – to make lengthier trips more comfortable. It should also mean that pot-holes are less troublesome, something that isn’t the case with its current line-up.

Thicker tires and a two-wheel drive should also improve comfort on journeys.

Other staples of VanMoof’s previous electric bikes, including the award-winning S3, have made the cut in this new model, including the built-in theft protection. This will automatically trigger an alarm when it detects that someone is attempting to move the bike after you’ve locked it within the companion app.

You’ll also be able to track the location of your VanMoof electric bike within the Find My app preinstalled on all iPhone, iPad, Apple Watch and Macs. The last-known GPS location from a sensor inside the frame will be shown on a map, with users able to jump into turn-by-turn directions to the exact spot with a tap or two.

Like the VanMoof S3, the new model arrives with an automatic gearbox, so you won’t need to worry about shifting from the handlebars. Instead, the bike itself will automatically juggle between the right gear and the amount of power being drawn from the battery cell.

Speaking about the reveal of its first hyperbike, Ties Carlier, Co-Founder of VanMoof, said: “The VanMoof V is our first hyperbike, an e-bike dedicated to higher speed and longer distance. I believe this new type of high-speed e-bike can fully replace scooters and cars in the city by 2025.”

The ongoing Covid-19 pandemic has sparked a cycling boom across the UK, Europe and the United States – with electric bike sales in particular seeing mind-boggling growth. Millions have already been invested in cycling infrastructure across cities to support the millions of people now choosing to avoid public transport and cycle to work.

However, VanMoof wants to see more investment and change. In a blog post about its VanMoof V, it says “to truly reverse the car-first mentality, cities need to modernise policies to open up our cities to a more sustainable future. Now more than ever, VanMoof co-founders Ties and Taco Carlier, are calling on lawmakers and city governments to urgently update e-bike regulations to advance the further adoption of this category. During the development of the VanMoof V, VanMoof intends to work with city governments to explore solutions from geofencing to revised speed regulations.”

BMW recently unveiled its first electric bike model, which has three modes with top speeds of either 15.5 mph, 28 mph, or 37 mph. Like VanMoof, the company has spoken about introducing different speed limits for different areas – slower speeds in quiet residential areas compared to fast commuter roads into cities, for example.

Currently in the engineering stage, the VanMoof V is available for invite-only reservations from today, with first deliveries expected by the end of 2022.

Reservation codes will be shared periodically via a waitlist on vanmoof.com. Reserving the VanMoof V for £20 means you can be one of the first to ride it when it’s ready for the roads. The VanMoof V is a new addition to VanMoof’s line-up and will sit alongside the existing S3 & X3 series – it will not replace either of these models.

Pilots in Pakistan airliner crash were reportedly distracted by coronavirus