The gunman, armed with an AK-47, is in a second-storey window of a school, prepared to make a final, bloody stand.

SWAT officers rush into an entrance below. Two are struck by gunfire and are killed instantly. As fleeing civilians prepare to breach a door, the gunman turns his rifle towards them and shoots one in the back. 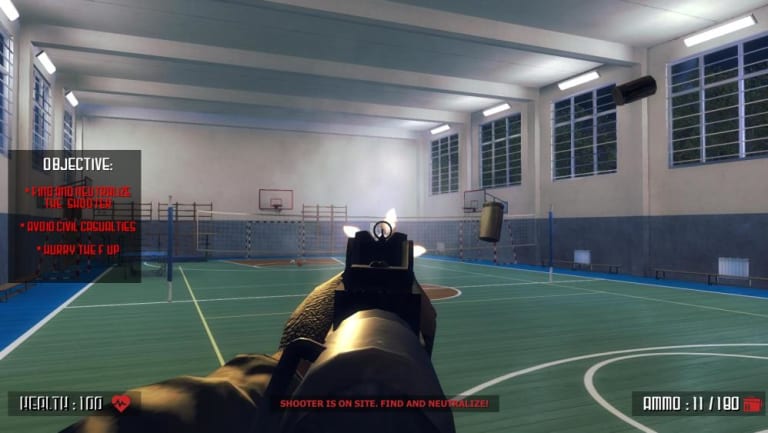 If your PC meets the minimum requirements, and you have a few dollars, you, too, could have been a school shooter – in pixelated form.

Publisher ACID had planned to release Active Shooter on Valve Software's online store, Steam, on June 6 and charge between $US5 and $US10.

The game, touted as a police-response simulator, allowed players to move through a school as either a SWAT officer or a gunman terrorising civilians and police.

However, Valve said in a statement on Tuesday evening that the developer, Revived Games, and ACID had been removed from Steam.

"This developer and publisher is, in fact, a person calling himself Ata Berdiyev, who had previously been removed last [autumn] … Ata is a troll, with a history of customer abuse, publishing copyrighted material, and user review manipulation," Valve’s statement said.

"His subsequent return under new business names was a fact that came to light as we investigated the controversy around his upcoming title. We are not going to do business with people who act like this towards our customers or Valve."

Concerns about the link between violent video games and real acts of violence have percolated for decades. But scrutiny has been renewed following school shootings in Florida and Texas, drawing responses from US President Donald Trump and Lieutenant Governor of Texas Dan Patrick. They have said simulated violence inspires killers.

Active Shooter, then, would have been the game of the moment, at the nexus of a heated public debate about why and how gunmen storm public places to kill indiscriminately, although recent research has found that school shooters actually tend to lack interest in violent games.

The game touched off strong reactions from parents of students killed in a mass shooting in Parkland, Florida, on February 14.

"It’s disgusting that Valve Corp. is trying to profit from the glamorization of tragedies affecting our schools across the country," Ryan Petty, father of slain 14-year-old Alaina, wrote on Facebook. "Keeping our kids safe is a real issue affecting our communities and is in no way a 'game'. "

Fred Guttenberg, whose 14-year-old daughter, Jaime, was among the 17 people killed at 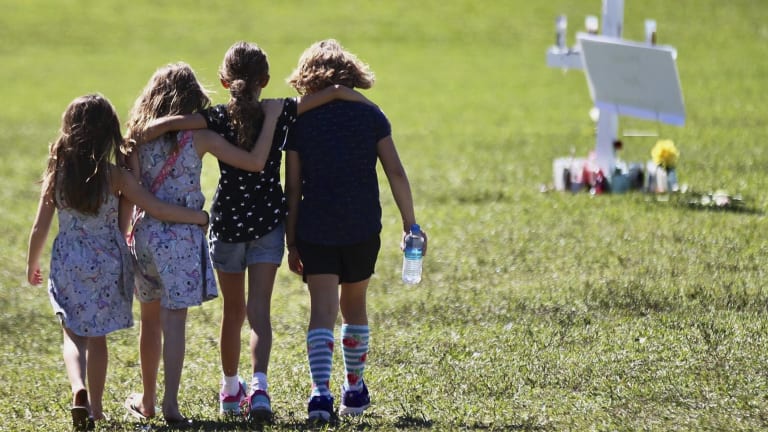 Four children console each other after 17 students were killed by a former student at Marjory Stoneman Douglas High School in in Parkland, Florida.

in Parkland, blasted the game.

"I have seen and heard many horrific things over the past few months since my daughter was the victim of a school shooting and is now dead in real life. This game may be one of the worst," he wrote on Twitter.

In follow-up messages, he had asked his followers to call Valve chief executive Gabe Newell to demand that the game be removed from his platform.

Michael Casserly, the chief executive Council of the Great City Schools, an urban school system coalition, said on Tuesday the game "violates every sense of decency a civilised nation should hold dear".

Amid the intense criticism, before it was removed, ACID said on its Steam page on Thursday that the developer considered removing the option to play as the mass shooter and had consulted Valve for advice. It also said that child characters would not be used in the game.

The Parkland massacre and a May 18 shooting that left 10 people dead at Santa Fe High School outside Houston have reignited calls for restricted access to violent games for minors as Trump, Patrick and others decry their social role among teenagers.

After the Santa Fe shooting, Patrick cited everything from too many doors in schools to violent video games as factors that contribute to mass killings.

"We have incredible, heinous violence as a game, two hours a day in front of their eyes. And we stand here and we wonder why this happens to certain students," Patrick said.

But some recent research has challenged the popular consensus that mass killers are fuelled, inspired or otherwise desensitised to violence by playing violent games.

And even more surprising to some, limited data points to school shooters as being less interested in violent video games than most of their adolescent male peers.

An analysis of 10 school shooters between 2005 and 2012, including the Virginia Tech and Sandy Hook gunmen, showed that only two played violent video games with any regularity.

That is much lower than the 70 per cent of male high school students who show interest in those types of games, said Patrick Markey, a Villanova University psychology professor and co-author of Moral Combat: Why the War on Violent Video Games Is Wrong.

While there is no clear reason that there is a disparity between the groups, researchers say video games are so culturally ingrained that avoiding the often-communal ritual of playing games with friends can point to the antisocial behaviour sometimes associated with killers.

"Kids who are psychologically healthy tend to do things their peers do," Markey told The Washington Post on Tuesday. "It’s a sign of health and normal for kids to play violent video games whether parents like it or not."

For instance, Virginia Tech killer Seung-Hui Cho had no history of playing video games, violent or otherwise, before he killed 32 students and teachers, and then himself, in a horrifying 2007 mass murder. In remarks to authorities, a roommate said it was strange that Cho did not play games with his peers, Markey said.

Research and interest on links between violent games and real-world violence spiked after it was revealed that the Columbine gunmen played Doom, the first blockbuster first-person shooter game, released six years before their 1999 attack.

But Markey said research initially focused on the effects on behaviour immediately after playing games, showing some links between spikes in aggression.

Although research has shown that players can be more aggressive immediately after playing a violent game, it does not have long-term effects, much like watching sad movies does not cause clinical depression, he said.

Markey turned to crime data and built on a 2004 study from the US Secret Service that found similar numbers of school shooters showing disinterest in violent games.

Desensitisation to violence does not appear to be permanent, either, he found. When players of violent games were shown execution videos and clips of operations, the gamers were "just as horrified" as non-gamers, he said.

But Markey said his research did not mean that he condoned games such as Active Shooter, which he condemned as "extremely objectionable" and clearly created to stir controversy.

The game also inflamed another point of recent social discussion: violence against women.

In the promotional trailer, both police and the gunman encounter civilians. All 16 shown on screen are scantily clad women. Some of them are dead on the floor. No male civilians are shown.

At the trailer’s closing, the gunman pulls a pin on a grenade and tosses it at a group of three women appearing to run away. He kills one with a shotgun, with the counter ticking to 10 civilians killed. The grenade’s explosion makes it 11.

Your iPad is changing with the biggest Apple update EVER

Covering the Campaign Trail When There Is No Trail