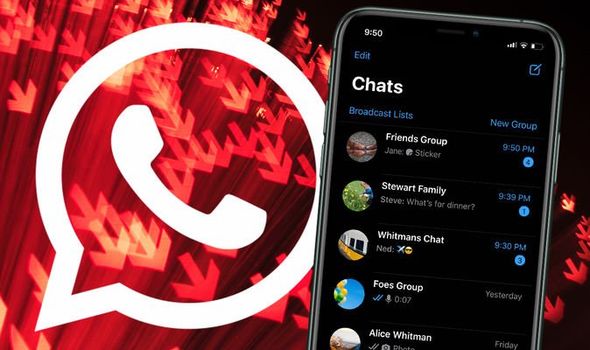 WhatsApp not working on your iPhone or Android smartphone? Don’t worry – there’s nothing wrong with your device.

Millions of WhatsApp users worldwide have been left unable to send or receive texts for five hours. Loading up WhatsApp, users across the globe are presented with a status message that endlessly says that it’s “Connecting…”. However, the ongoing global outage prevents your app from connecting to WhatsApp’s servers. WhatsApp users can no longer send or receive text messages, pictures, documents, or videos. Voice and video calls have also been impacted by the colossal outage, which has taken down a number of other popular Facebook-owned services, including Instagram and the main Facebook social media app as well as Facebook Gaming. The issues have hit users on iPhone, Android, and those who rely on WhatsApp for Web to send messages from their web browser, like Google Chrome.

WhatsApp has acknowledged the issues impacting users across the globe. The firm shared the update on Twitter as the outage approached its one-hour milestone: “We’re aware that some people are experiencing issues with WhatsApp at the moment. We’re working to get things back to normal and will send an update here as soon as possible.”

The immensely popular messaging platform has not confirmed when users can expect normal service to resume. According to some reports, internal messaging apps used by Facebook employees have also gone offline, leaving teams scrambling to find a solution to the global issues.

Facebook, which owns and operates WhatsApp following a $16 billion acquisition back in 2014, has shared an almost identical statement on its Twitter account, writing: “We’re aware that some people are having trouble accessing our apps and products. We’re working to get things back to normal as quickly as possible, and we apologize for any inconvenience.”

Users who attempt to send texts on WhatsApp right now will see a small clock icon in the bottom right-hand corner of the message. This indicates that the message hasn’t been able to leave your device. WhatsApp uses a single tick to denote when your text has reached its servers. That turns into a double-tick when the text travels from those servers to the recipient’s smartphone. When those double-ticks turn blue, it means the recipient has opened WhatsApp and read the text message.

These same symbols appear in the corner of picture messages, videos, PDFs, and more. When trying to make a voice or video call to a recipient, the usual call interface will appear as normal and WhatsApp will say that it is “calling” …but you won’t get an answer as the messaging service isn’t able to connect to the servers. If you wait long enough, WhatsApp will hang up throw you back to the main interface of the app.

Some users will also see the words “Connecting…” appear instead of your contact’s name and profile picture at the top of a conversation within the app. This is also an indication that something has gone awry with WhatsApp.

According to independent service DownDetector, which monitors the performance of online services by tracking complaints from customers across social media, has revealed the sheer scale of the ongoing outage. At its peak, DownDetector figures revealed that more than 70,000 WhatsApp users have bemoaned issues with the messaging app every minute. That vast scale is hardly surprising, after all, WhatsApp is the most popular messaging service on the planet with more than two billion users worldwide each month.

Some reports suggest that a DNS issue is behind the latest WhatsApp outage.

For those who don’t know, a DNS is essentially a phonebook for your gadget. The first thing that happens when you type a URL into your browsers’ address bar – like express.co.uk, for example – is your device translates that text into an IP address that it understands – something like 192.168.1.1. To translate the human-friendly web address into the computer-literate IP address, your machine uses a DNS. This acts like an enormous phonebook that tells your browser what IP address it needs to load to take you to the website you’re looking for.

According to some early reports, Facebook’s DNS records were withdrawn from the global routing tables a few hours ago – triggering a huge outage. Facebook has yet to confirm whether a withdrawal of its DNS records led to the widespread problems with WhatsApp, Instagram, Facebook Messenger, and more.

Facebook Chief Technology Officer Mike Schroepfer apologised for the ongoing problems using his personal Twitter account. He posted: “*Sincere* apologies to everyone impacted by outages of Facebook powered services right now. We are experiencing networking issues and teams are working as fast as possible to debug and restore as fast as possible”

WhatsApp outages are fairly common, but not on this scale. And not for this duration of time. While it’s not unusual for a hiccup to occur in a single territory – we haven’t seen anything on this scale in years.

The last time WhatsApp suffered such a colossal outage was during New Years Eve, when the huge number of WhatsApp users attempting to send well-wishes caused the messaging service to crash.

Using the geolocation data stored with social media posts, like tweets, DownDetector is able to map-out the complaints to show the areas with the highest concentration of problems. The latest figures show that users in London, Glasgow and Manchester are most likely to be impacted.

If you’re looking to hide your location and identity from companies online, ExpressVPN is widely regarded as the best option. It boasts fast server connections, apps for all mobile and desktop platforms, has some serious security smarts and is easy to use. There’s even free cloud backup thrown in. And like all VPNs, it allows you to change your location, so you can unlock geo-locked content on Netflix, HBO Max, Prime Video, BBC iPlayer, and more.

Private Island comes under fire for flying 19 influencers to Hawaii

Kanye West ‘Genuinely Believes’ He Can Make the U.S. Better as President

Megan Rapinoe to Trump, 'You're Excluding People Like Me'