One of the few businesses left relatively unscathed by the pandemic is the humble corner shop.

Despite the rapid growth in online shopping, almost two thirds of Brits chose to shop locally last year, to the benefit of local businesses.

But a raft of new ‘instant delivery’ apps, backed by billions of pounds in Silicon Valley venture capital, is now looking for a slice of the action.

Bearing one-word names like Getir, Gorillas, Dija, Weezy, Zapp, Fancy, Jiffy and Beelivery (all real app names), the rapid grocery apps have attracted more than £5 billion of funding in this year alone, with investors in London and Silicon Valley betting big on the sector’s future.

‘This is a manifestation of something we’ve seen again and again,’ says equity analyst Giles Thorne of investment bank Jefferies.

‘Namely, the internet creating the ability to do something that we already do, but making it quicker, cheaper, faster – whatever you want to call it – but more efficient.’

The public seems to have been receptive so far – UK-based startup Weezy has grown three times as fast as delivery giant Deliveroo in their first year of operations, according to Weezy co-founder Alec Dent. 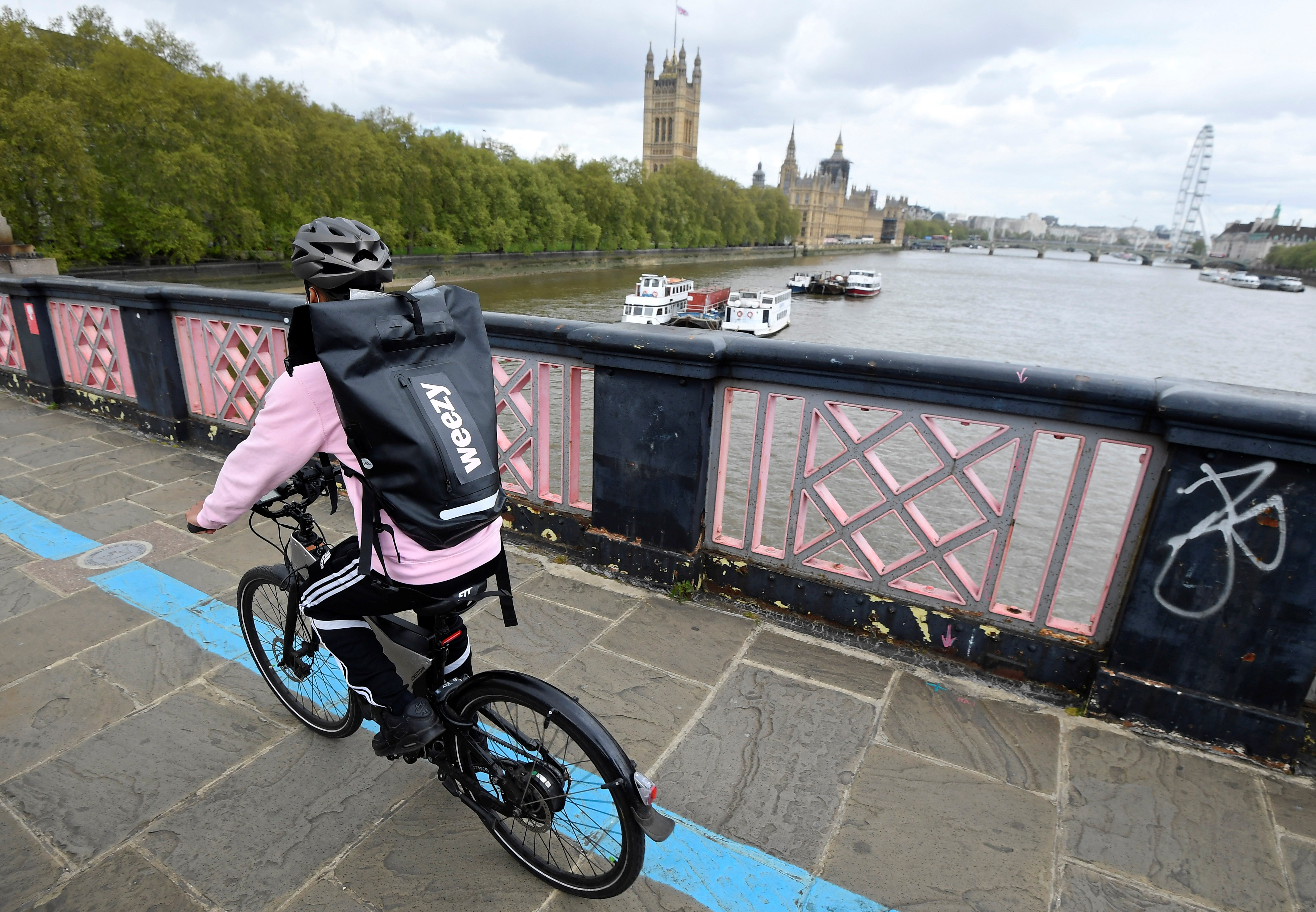 Grocery home-delivery apps are an enticing proposition when you’re too scared to venture out to the supermarket, but will they survive as the world returns to normal?

Though the pandemic may have been the catalyst for this new generation of delivery apps, it’s a trend that’s here to stay, according to Thorne, an expert in European internet companies.

‘Once people start changing their behaviour to use the internet to do something they were doing before, but more efficiently, they never go back,’ says Thorne.

‘Estate agents don’t advertise in newspapers anymore, they will just advertise on Rightmove.’

‘The pandemic has definitely helped the arrival of on demand grocery, but the retreat of the pandemic won’t kill the business case for it.’

How did the instant grocery delivery trend start?

As the pandemic forced the population inside, people became used to ordering everything online – dinner, toiletries and the weekly shop. But for groceries, the enormous demand presented a problem – you’d have to wait a couple of days to get a booking slot, if you could get one at all.

It’s this delay that a raft of ‘instant grocery’ apps seek to exploit – ‘we’re faster than you’ is the slogan of Berlin-based Gorillas, which boasts of its ability to get groceries to you quicker than you can pop out to the shops.

Instant delivery apps are also hoping another feature will work in their favour: convenience.

‘As a customer, you can now have groceries kind of fit around your life rather than the other way around,’ says Alec Dent, co-founder of instant delivery app Weezy.

‘Typically, you might have to go out to do your shopping when it’s extremely inconvenient. You might be in the middle of work, or carrying kids, or not dressed properly. You might be in a hurry, or hosting guests.’

‘There’s just no option right now to do some grocery shopping in any of those scenarios.’

The potential for enormous profits, targeting a mishmash of busy young professionals and spontaneous (or lazy) shoppers, has attracted reams of venture capital money.

‘Online grocery has been a growing trend over the last decade, but Covid accelerated the realisation that lots of parts of the model are just broken,’ says Ophelia Brown, founder of London-based venture capital fund Blossom Capital.

‘Supermarkets have struggled to make an online channel work for them, because the way that you build an online business is very different from the retail offering.’

Brown’s Blossom Capital has invested in London-based Dija, founded by two ex-Deliveroo executives, but many investment funds in the US and the UK have built up large cash reserves through the pandemic and are investing in a slew of grocery startups in the hope they can pick a winner.

The financial warchests and intense competition for customers has led to a flurry of promotions, with some apps effectively paying customers to shop with them for the first few deliveries to try and keep them as patrons long-term.

Some observers say the influx of cash is the standard Silicon Valley playbook, where startups start with low offers and promotions, only to raise prices when they have enough of a foothold on the market, similar to Uber and Deliveroo’s early promotions.

But supporters would argue that some instant delivery apps have already proved their value – like GoPuff, in the United States, which has been operating since 2014 and is already worth $9 billion, or Istanbul-based Getir, operating since 2015 and generating hundreds of millions of dollars in sales.

Established players like Deliveroo, Uber Eats and Just Eat are taking notice, with some in talks to partner with the new apps, and others getting involved in the grocery delivery game themselves.

Deliveroo chief executive Will Shu told the FT: ‘It’s received a ton of venture capital dollars in an incredible amount of time,’ adding that the apps’ growth was ‘pretty staggering’.

Though much of the investment is speculative, funds are hoping that the sheer size of the market will ensure healthy returns.

‘Food is the last big category that hasn’t really digitalised and felt the impact of the internet,’ says Thorne.

‘It’s a very, very big addressable market. People spend hundreds of billions, if not trillions, of dollars on food.’

How do instant delivery apps work?

Shopping for groceries on an app or website isn’t new – supermarkets have been delivering food online for years, through websites like Ocado, and established food delivery apps like Deliveroo and UberEats have begun to offer deliveries from local shops, too.

But the latest class of ultra-fast food apps have a different vision of the future. They are often defined by what’s called a ‘dark store’, small delivery hubs that aren’t open to the general public and dotted frequently around London, to maximise efficiency and cut down on delivery times.

These ‘dark stores’ only stock a select offering of popular items, but the grocery apps are betting that the core products are bought frequently enough that customer won’t miss more niche items.

The idea of distribution centres solely to serve a delivery app’s customers also isn’t new – ghost kitchens, which proliferated in the wake of Deliveroo and UberEats’ success, popped up in disused warehouses and empty industrial parks, in order to serve customers in greater volumes than traditional kitchens allowed.

But with the ‘rapid delivery’ apps owning the warehouses, they’re betting they can beat traditional delivery apps on speed with efficient packing processes – most ‘instant delivery’ apps promise to get you your food within half an hour of ordering from your phone.

Talk of ‘efficiency’ and ‘convenience’ in the startup world has alarmed some observers, after similar goals led to the rise of the so-called ‘gig economy’, an economy of workers without contracts who only get paid for each delivery, ride or ‘gig’ they make.

While startups like Deliveroo and Uber claim that the gig economy is good for workers seeking flexible work, without a contract, workers’ rights unions have criticised the model as denying staff full employment rights and treating workers as disposable.

In March, Deliveroo had the ‘worst’ IPO in London’s history when it went public, after criticism from some investors over workers’ rights. It was only this week that Uber let its workers join a trade union in the UK, after a years’ long battle.

Some of the next wave of delivery startups are looking to do things differently – companies like Gorillas and Weezy employe their drivers on full or part-time contracts, with employment rights and, in the case of Weezy, opportunities for career progression.

But it’s not all been smooth sailing – Gorillas’ drivers have complained of ‘grueling’ delivery times and back pain, because of the heavier items that they have to carry on their backs.

Still, delivery app founders are hoping that complaints from riders are just growing pains of a rapidly expanding industry, and that the model of employee drivers will work in the long-term.

‘It’s a completely different model,’ says Weezy’s Dent. ‘We always intended it to be different. We never wanted to rely on a gig economy network.’

The most pressing question for many of the startups vying for a seat at the delivery table is whether they can last.

Counting both new startups and legacy delivery apps, there are currently at least ten companies battling it out for dominance in London’s instant grocery delivery market – most observers don’t think that’s sustainable.

‘I can’t think of any market anywhere in the world that supports ten competitors,’ says analyst Giles Thorne.

‘There’s usually not enough economic value in the chain to deliver a decent return on all of that capital. On that basis alone, we’re not going to have ten in five years’ time, there will be consolidation.’

Some investors are more optimistic about long-term prospects, though, arguing that just as the UK supports a wide range of supermarkets – Tesco, Waitrose – so the new delivery economy will support a variety of new apps.

‘In the UK, we have so many different supermarkets, and the reason is because people have different tastes,’ says Dent.

‘On services like Weezy, we have a little less choice – we serve all of the same types of products, but when you’re looking at a specific product, you won’t have as much choice.’

‘That means you need to tailor your products to a specific audience, whether that’s students who wants snacks and alcohol, or a middle class audience that wants to do a midweek shop with quality groceries.’

If the apps do succeed, then, what will that mean for the fate of the local corner shop?

Industry insiders think that, rather than make life difficult for corner shops, it’s instead the Sainsbury’s Locals and Tesco Expresses that will suffer.

‘Corner shops are still going to be useful if you want to grab one or two items, the structure of these apps is not to encourage a two item order,’ says Blossom Capital’s Ophelia Brown.

‘Most convenience stores have very small average transaction values. I think the [delivery app] orders are much more likely to take on supermarkets and their local chains.’

The truth about Jane Fonda and Dolly Parton’s relationship

Pa. Boy Is Fatally Shot, Allegedly While Trying to Escape Sex Offender Trying to Abduct Him