Your Windows 10 PC is poised to get its most dramatic facelift in years as Microsoft plans to overhaul the Start Menu. There has been no shortage when it comes to updates for Windows 10, but the Start Menu hasn’t benefited from any changes in the five years since the operating system launched. But that’s about to change as the Redmond-based firm will totally refresh this popular way of accessing files, content, applications and settings.

We were already aware that the Start Menu was getting an overhaul, with Microsoft teasing some images of the design, but it now seems Microsoft is ready to give some Windows 10 users the chance to test it out.

The latest Insider build, named 20161, has just been released to some lucky PC owners and it includes the updated Start Menu. Explaining more, Microsoft said: “We are freshening up the Start menu with a more streamlined design that removes the solid colour backplates behind the logos in the apps list and applies a uniform, partially transparent background to the tiles.

“This design creates a beautiful stage for your apps, especially the Fluent Design icons for Office and Microsoft Edge, as well as the redesigned icons for built-in apps like Calculator, Mail, and Calendar that we started rolling out earlier this year.”

So what’s exactly different with the new Start Menu? Well, quite a lot actually.

Microsoft recently gave fans a full look at how this update will appear once downloaded onto PCs and there’s some big changes included. Pictures were posted on the official Microsoft 365 Facebook page late last month and reveal the cleaner Start Menu with a translucent background that gently blurs the desktop background image – or any of the windowed applications that happen to be running when you launch the pop-up menu.

You can also clearly see the new-look Fluent Design icons, which are a little less busy than the previous design. Icons are located in the middle of the tile with translucent open space around the edges – instead of filling the entire square, like you’ll find on the current version on the Start Menu on your Windows 10 machine. 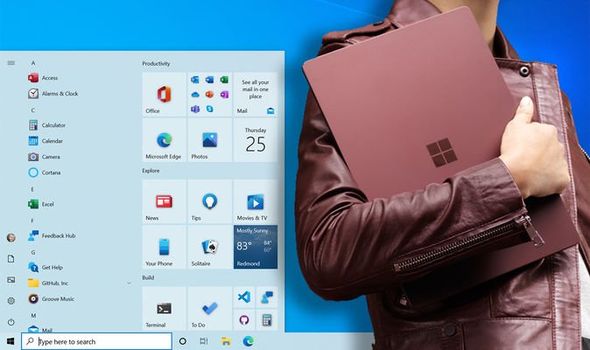 Live Tiles will still be very much part of the design. This is one of the trademark features of the latest version of Windows and surfaces new emails, headlines and weather updates in the small icon within the Start Menu – so there’s no need to click to open specific apps to find out what you need to know.

It can also be changed to a light or dark mode depending on your preferences and you can even apply your accent colour to the Start frame and tiles. There’s no word on when a full rollout will take place but the fact that Microsoft has begun allowing Insiders to take a look suggest an official launch could be coming very soon.