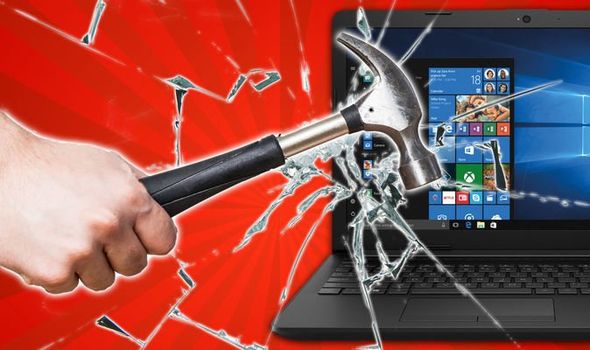 Windows 10 users will be protected from forking out time, money and a whole lot of hassle from potential hard drive failures thanks to a new feature Microsoft is working on. The latest preview build of Windows 10 introduces a new feature that alerts users as to when their SSD is about to suffer a catastrophic failure. The warning is specifically tailored to NVMe solid-state drives, and alerts Windows 10 users when the storage is on its last legs.

Windows 10 users are also advised to back up their data to the cloud before their hard drive ends up breaking.

This brilliant new feature to the market-leading Microsoft OS is a god send in so many ways.

It could potentially save Windows 10 users a fortune, as they wouldn’t have to fork out for the services of a hard drive recovery firm.

Not only that but it saves a whole lot of stress and hassle from the potential loss of important files or treasured pictures on their Windows 10 machine.

The helpful Windows 10 tool has been included in build 20226 that has been released to Windows Insiders. And the benefits of it were outlined in a blog post online. In a blog article, the Windows team said: “Attempting to recover data after drive failure is both frustrating and expensive.

“This feature is designed to detect hardware abnormalities for NVMe SSDs and notify users with enough time to act. It is strongly recommended that users immediately back up their data after receiving a notification.”

Outlining how this feature works, the Windows blog post added: “Clicking on the notification or navigating to the drive properties page in Storage Settings (Settings -> System -> Storage -> Manage disks and volumes -> Properties) will provide additional details.”

The new feature provides detailed information to show Windows 10 users how much time is left before their SSD goes kaput. 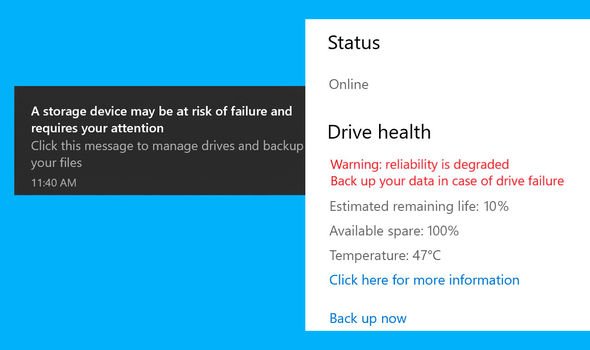 The ‘drive health’ screen in the Windows 10 Settings has a percentage which shows the ‘estimated remaining life’ of an SSD. This extra tidbit of information helps inform Windows 10 users as to how much time they have left to back-up and replace their SSD.

Nonetheless, if you end up getting such a warning it’s best to do it sooner rather than later. It’s unclear when testing will finish on this crucial Windows 10 feature, but hopefully it’ll receive a general rollout soon.

In other Windows news, security experts have put Windows 7 users on alert about a bogus Outlook e-mail prompting them to upgrade to Windows 10. Even though Windows 7 has reached its end of support it is still the second most popular desktop operating system in the world, behind Windows 10.

However, since the legacy software is no longer supported by security updates it opens the OS up to a whole host of security risks.

Any anxiety users have over using such a software has been capitalised by scammers who are sending out a phishing scam disguised as an official alert to upgrade.

The phishing scam involves an Outlook message being sent claiming the recipient has to upgrade to Windows 10 ASAP.

The Windows 7 user is told that they need to upgrade to Windows 10 ‘today’, and directs them to a site that purportedly helps with the upgrade process.

But it is all part of an elaborate scam intended to make Windows 7 users hand over sensitive data to cybercriminals.

The threat was revealed by Kaleb Kirk, a researcher with phishing prevention firm Cofense.

The fake Outlook message is being sent to those running the business version of Windows 7 and has a number of red flags – namely out of place capitalisation.

However, Kirk said: “Attackers have been using the ‘time to upgrade your out-of-date software’ ploy for years. With Windows 7 ending official support, it won’t be surprising if we see a flurry of better versions of this phish in the future.”

6ix9ine in Hot Water for Dissing Nipsey Hussle, Pop Smoke Over Their Deaths