This article contains spoilers for the season five premiere of The 100, ‘Eden’, which hasn’t aired yet in the UK.

It may have taken three years of being stuck together in space for Bellamy to forgive Echo (Tasya Teles) for everything she’d done against him while they were on Earth, but it may take a fair bit longer for fans of The 100 to forgive the show for its end-of-premiere twist that saw the couple happily in a relationship together.

The 100 creator Jason Rothenberg has already defended the kiss the new couple shared in the premiere, saying that he’s “aware of what’s coming” when it comes to reactions to that particular development. 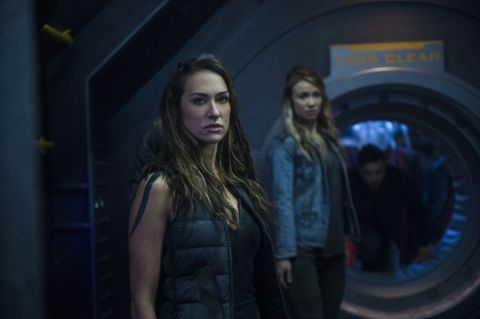 “My hope, though, is that people will understand that Bellamy was alone for six years,” he added. “Whether or not you believe that Clarke was a romantic thing in his mind, she’s dead to him, literally, and he moves on.”

Thankfully, Bellamy Blake actor Bob Morley has now given fans some happier news to hold on to: the hint of what to expect from the much-anticipated Bellamy and Clarke reunion.

“I can say it’ll happen in a place where you don’t think it’s going to happen, in terms of a location… I don’t think I can say too much,” Bob told Digital Spy and other media.

Well, wherever it happens, we can only hope there will be one epic hug:

As for what season five has in store for Bellamy more generally, Bob adds that that six-year time jump has done wonders for helping Bellamy to grow up and mellow out a bit more, which was just a little different to play than the character Bob was used to.

“The character [of Bellamy] has had six years to develop and they’ve worked on him in the writer’s room… and for me to come back six months later still feeling like I was going to play the same character and end up playing someone quite different… it took a little bit of time for me to wrap my head around,” he explained.

“The writers’ room got in early this season and they really pulled the characters apart and put them back together.”

Which is something Rothenberg himself backed up, even while hinting that the bonds that the gang in space forged during the time jump will be tested throughout the rest of this season.

“Relationships are undergoing stress [this season] – they’ve changed a lot obviously in six years,” he shared. “Space Crew is now a genuine family and there are multiple relationships up there and that’s something that will be tested really early, and often.”

Trump, Brexit and the need for checks on executive power

Taliban says has brought down U.S. military plane in Afghanistan