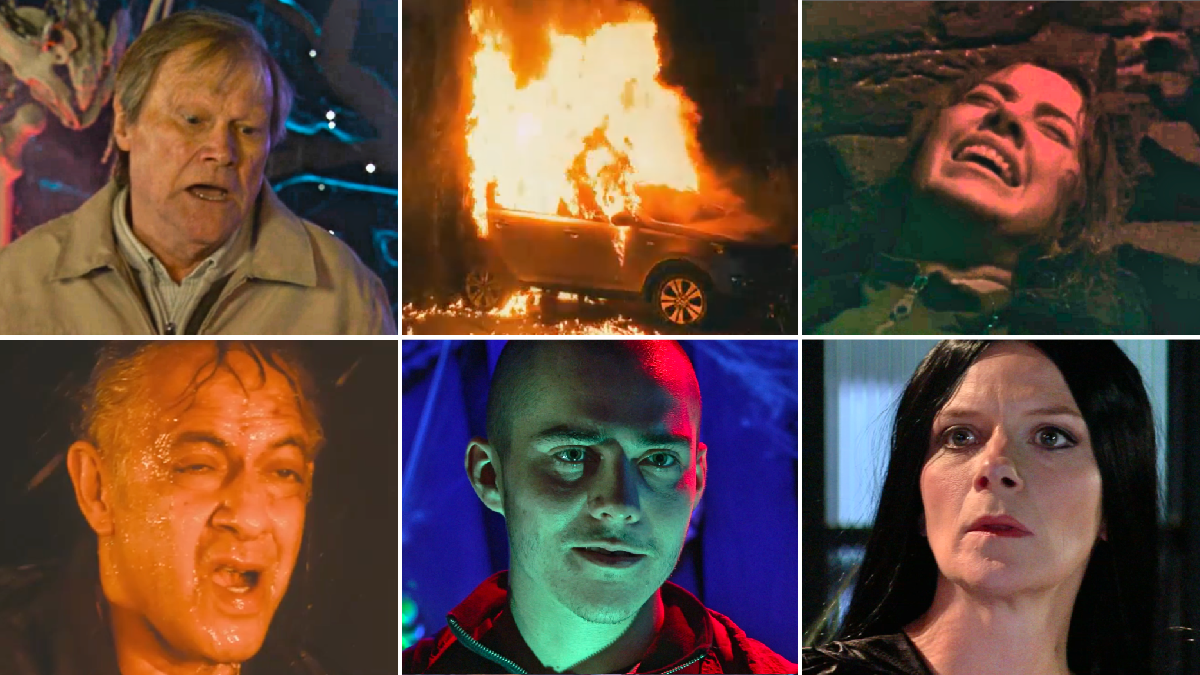 Coronation Street did NOT hold back with its first two offerings for ITV’s Super Soap Week, delivering drama, destruction and potentially death aplenty.

The long-running serial drama promised to deliver, and it’s certainly done that thus far, with a chilling storm bringing chaos and terror for the residents of the eponymous street.

Abi Franklin (Sally Carman), desperate for revenge, hunted Corey Brent (Maximus Evans) down and pulled a gun on him, but before she could pull the trigger, the ground gave way and they descended into the sewers below.

This was one of two holes in the ground that opened up during Monday’s (October 18) double-bill, and it’s pretty clear they’re related to the Platts’ sinkhole.

Elsewhere, Leanne Battersby’s (Jane Danson) life is on the line, as Harvey Gaskell (Will Mellor) is on the loose, while Dev Alahan (Jimmi Harkishin) was forced to choose between his children, with seemingly deadly consequences!

With jaw-dropping moments left, right and centre, it’s safe to say that Parts 1 and 2 of Corrie’s huge week have left us wanting more.

Before the next offering, however, we’re delving into tonight’s double-bill once again, to take a look at all the hints and clues we picked up on, as well as the questions we’re going to need answered pronto!

Debbie Webster was busy putting the finishing touches on her house of horrors attraction when Kevin jokingly asked if she was ‘killing time’.

The businesswoman was not amused, however, as she evidently didn’t have any time left to ‘kill’.

Abi Franklin and Harvey Gaskell, however. Well, let’s just say they’ve got plenty of time to kill. In fact, you might even say that – for them – it is officially killing time! And yes, we mean that literally.

Will Natasha make it home in time for the celebrations?

Natasha Blakeman departed the cobbles for an impromptu trip to London, promising Sam that she would be back in time for the opening of Horror-nation Street.

Due to the storm, however, is appears unlikely that she will return home in time. She did vow to do whatever she could, but will she make it in time? The jury is still out on that one.

Is Johnny really leaving the street?

Johnny Connor broke Carla Barlow’s heart, as he revealed that he’s moving to Bali to be with Kate. Carla pleaded with him to reconsider, but it was quite clear that Johnny had made up his mind.

The question is: will he follow through on his plan? Or will a word or two from Jenny be enough to make him stay?

‘Plenty of time for getting maudlin and saying goodbyes’

Johnny wasn’t allowing Carla to get upset over his impending departure, warning her not to be getting ‘maudlin’, as there will be ‘plenty of time for saying goodbyes.’

Could this be an omen of things to come? We know that tragedy will ensue during this explosive week, so it’s safe to assume that several residents could very well be saying goodbye.

But to who? Now that really is the question!

Will Abi and Corey survive following their collapse?

Abi Fwas hellbent on pulling the trigger and murdering Corey Brent for killing Seb. Before she could do so, however, the ground below them gave way, and the pair fell into the Victorian sewers below the street.

Corey was barely conscious, while Abi was trapped under a significant amount of rubble. Will someone come to their aid before it’s too late? Or will either character be able to free themselves?

Whether or not Abi survives remains to be seen, but if she does, will she see her plan to kill Corey through to the bitter end? The gun remains at her side, so it’s an entirely possible outcome.

Will Roy report Abi to the police?

Roy Cropper was dumbfounded that Nina Lucas had kept shtum about the fact that Abi has a gun in her possession, and thus – after hearing what he believed to be a gunshot – he decided to call the police.

But will he report Abi? If so, it’s likely that she could face jail time.

Kevin Webster was attacked by escaped convict Harvey Gaskell when he arrived at a remote roadside to come to Dev Alahan’s aid.

For the remainder of the episode, he was unconscious. Will he be okay?

Will Harvey take revenge on Leanne?

After setting an escape plan in motion, Harvey got into Kevin’s truck and drove himself all the way back to the cobbles where he confronted a petrified Leanne.

With Toyah having had a role to play in his appeal falling through, the drugs baron has yet another reason to resent the Battersby clan.

The question is: will he follow through with his plan and exact revenge? Or will Leanne make it to safety before that can happen?

After the prison van crashed into the Alahans’ vehicle, Aadi attempted to wake dad Dev up. He succeeded, but Dev was more concerned with Asha, who was barely conscious in the back seat.

Aadi pleaded with Dev to free him first so that they could save Asha together, but Dev refused, and thus rescued his daughter on his own.

Little did he know, however, that the vehicle had caught fire, and as he went back for his son, it exploded right before his very eyes!

Coronation Street’s signature theme tune is nothing short of iconic, but in recent years, a significantly shorter version has been used on the closing credits, removing some of the melody’s best bits.

Tonight’s double-bill – much like the 60th anniversary episodes – concluded with the full length version, and quite frankly we couldn’t be happier about it.

Now, if only we could have the full theme restored permanently, that’d be great!

Joe Biden President: When does Biden start? When is inauguration?