This summer, I was at a drag brunch in Miami waiting for the show to start when an unmistakable voice announced “Hiiiiiiiiiiiiieeeeeeeee” through the bar’s speakers. Obviously, it was none other than Alaska Thunderfuck 5000. The inimitable RuPaul’s Drag Race alum loves a good catchphrase, and she’s coined aplenty. (The aforementioned saying has become the the unofficial/official kickoff song for drag shows across the whole country.)

With that kind of influence, to say Alaska is making a “comeback” with her newest endeavor would be incorrect. This powerhouse never left. It has been a few years since her run on RuPaul’s Drag Race though, and the show—plus the whole world, let’s be honest—has changed a lot since. Alaska made her Drag Race debut in 2013 on season 5, where she finished as a runner-up to winner Jinx Monsoon. She was a fan fave and later came into All Stars guns a-blazing, winning four maxi challenges. After a brief but undeniable ~total breakdown~, she snatched the crown and was inducted into the Drag Race Hall of Fame.

But Alaska fans fear not, because she clearly didn’t stop there. She’s been back in the recording studio and writing room working on her biggest projects yet. First comes her new unflinching memoir My Name’s Yours, What’s Alaska? (named after another one of her signature catch phrases BTW), which dropped on November 9. Next up is her fourth studio album, Red 4 Filth, accompanied by her first-ever North American headlining tour—both coming in early 2022. (Psst: You can already snag tour tickets here. You’re welcome.)

Just in time for *all the things*, Alaska caught up with Hearst Pride over Zoom to spill the tea. Read on for more about Alaska’s book, her new album, and what she’s tackling next. 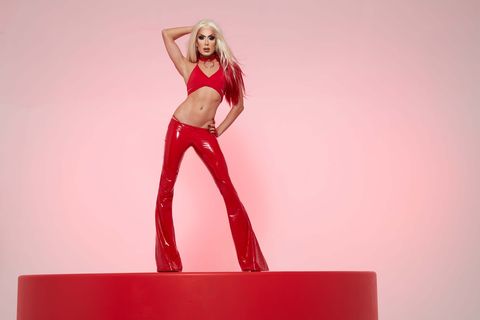 On My Name’s Yours, What’s Alaska?

“The book is part of my master plan: book, then movie, then made for TV movie (laughs). No, I definitely wanted to do a book, but really had to think about what kind of book it should be. Drag books are typically light and visual and lots of pretty pictures and funny, sassy things. And I was like no, no, no—I wanted this to be a real book. A book that you actually have to read and I want to actually write it because I like writing. So I decided to tell the honest story of my life up until this point. It was really fucking hard, but we did it.”

On her relationship with gender

“The binary is a structure that we have had in place for a very long time. The past few years have been pretty tumultuous, but we’re finally looking at structures that have been in place—whether it’s the patriarchy, white supremacy, or the gender binary—more closely and saying ‘this is no longer working.’ Taking those systems apart is fierce. The more we move toward a star trek future where gender is no longer a thing that we are hung up on, the better.”

“I’ve never stopped watching Drag Race. It changed by life and it is my favorite TV show. I haven’t gone back and watched All Stars 2 since I watched it [when it aired] because it was a very tumultuous time in my life. When we cover it on Race Chaser [Alaska’s episode-by-episode Drag Race podcast, co-hosted with Willam], I will have to relive it. It is my duty as a journalist.

I do love Drag Race but it’s like a political party—you don’t want just one. You need more than one show with drag queens on TV to keep it interesting. I really love what Dragula is doing. Keep in mind that Drag Race race is easy street for a drag queen: You are given a huge platform, you are given visibility and all of these things. You think of the predecessors like Jackie Beat, Lady Bunny, RuPaul and they lived in a world where that didn’t exist. Jackie always says that she wears flats because her feet hurt from paving the way.”

“When I got my phone back after season 5 I was expecting ‘I can’t wait to see you!’, ‘I miss you!’ What I saw was a text from Sharon [Needles, Alaska’s ex]. It said: ‘The house burned down and our cat ran away. Love you see you soon.’ And it was horrible. We don’t know who did it, but the house was burnt down intentionally. Swallowing news like that after the emotional rollercoaster of filming Drag Race was the beginning of a really wild and horrible time in my life. The dynamic of my relationship started changing really fast. We also were getting wasted and doing coke, which didn’t help. It was the beginning of a roller coaster.

That period ended up leading to me taking a break for several years from drinking. I realized that I had never done drag without being drunk. So it gave me the opportunity to really fall in love with drag all over again and rediscover what it is I love about drag. It wasn’t entangled with getting wasted anymore. I was able to do my job and my art and not feel like I had lead boots on. I enjoyed the process more. I’m not saying to stop drinking immediately (in fact, I just put my face on a vodka bottle…), but definitely examine things and be curious about them.”

On All Stars 2 tumult

“My breakdown had to happen that way. That is part of the product with reality TV, it’s not just about showing up and being funny and being fierce. You have to bear a part of yourself that wasn’t visible before. That’s part of the toll the cross the bridge. For most of the season, I wasn’t opening up or giving them anything because I had been here before. I would sit in the interview chair and give cardboard answers. Then, obviously, I freaked out at the end. Having a complete breakdown is great TV, but it is not fun in real life.”

“I was swimming in the ocean and the water was Britney Spears. She was everything and she was everywhere. In middle school all my friends and I in art club thought we were too cool and that Britney sucked. But then I heard “Oops I Did It Again” on the bus and it gave me chills. Her music did something physical to me and had a huge impact on my life. I saw her I felt like I was her. When she was going through her turmoil, I shaved my head at the same time. I learned the “Slave For You” choreography in my basement in college. I just love her so much.

I am obsessed with the early 2000s overall. That is the time period when I fell in love with music and when I was coming of age. Like the Britney tingles on the bus ting, that music was formative for me. My new album draws inspiration from all of these places (Britney, NSYNC, Toni Braxton, Aqua). I am really excited to take it on tour because it’s just so much fun to perform. I can’t wait to sing it a whole bunch of times over and over again.”

“First of all, we should be changing hashtag to #BritneyFree! Seriously, it is staggering to think that she has been in that toxic, horrible, conservatorship system for so long. Unfortunately, Britney is only the tip of the iceberg. So many others are being deeply taken advantage of. We need to look at this system as a whole and look into how it effects the elderly and others in conservatorships.”

What’s next for Alaska?

“I want to do a movie. I want to write a movie. Maybe direct it too, but that sounds like a lot. I would want to act in it but as a secret side character like the janitor and wear prosthetics so you wouldn’t recognize it’s me.”

‘Disney Family Singalong’ Is Coming Back & Hopefully So Is Ariana Grande

Super Bowl 2020 free live stream WARNING: You could be at risk as online dangers exposed