Avengers 4 is getting closer and closer, but there’s still very little we know about the Infinity War sequel (including its official title).

With Disney carefully keeping the lid on things, our only recourse has been to theories and speculation of varying degrees of wildness.

A lot of attention has focused on Doctor Strange’s actions in Infinity War and his revelation that he has found the one outcome in 14,000,605 possibilities in which our heroes come out on top. “We’re in the end game now,” he says portentously after giving the Time Stone over to Thanos, and, “There was no other way,” as he fades into ashes.

Now Reddit user comrade_batman has combined several theories to explain just what Benedict Cumberbatch’s sorcerer needed to happen before his big fade out. The ingredients for a magical spell to defeat Thanos, if you will.

The first thing Strange had to ensure would happen was Tony Stark’s survival. Iron Man came pretty close to death in the battle on Titan, but Stephen Strange intervened when Thanos threatened to kill his new ally.

This would explain why Strange bothered to fight Thanos in the first place, if his intention was always to give over the Time Stone – thus allowing the villain to gain all the Infinity Stones and enact his deadly master plan. Strange held on to the stone until he had the chance to use it to preserve Tony’s life, presumably because the MCU’s resident genius inventor has some key part to play in Avengers 4 (and judging by how much Robert Downey Jr is said to earn from these movies, his part would have to be pretty substantial, right?).

But this can’t be the whole of Strange’s plan, surely? After all, there were probably countless ways he could have ensured that Tony survived – not just one in over 14 million. 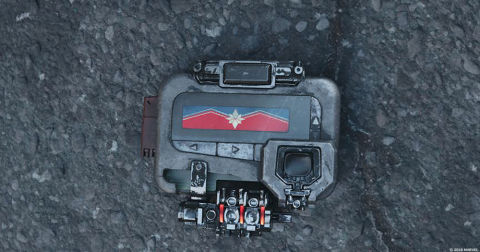 The later points in Strange’s plan involve him playing for time (no pun intended) during the battle with Thanos in order to ensure that particular events elsewhere come to pass. This assumes that his use of the Time Stone to scan possible futures made him temporarily omniscient – nice work if you can get it.

The theory holds that the first event he had to make sure happened was Nick Fury (Samuel L Jackson) calling on Captain Marvel in the nick of time. This was shown in the mid-credits scene, which shows Fury and Maria Hill (Cobie Smulders) witnessing the destruction caused by Thanos and the Infinity Gauntlet.

Maria vanished and Fury was able to send a call to Captain Marvel just before he vanished too. His pager fell to the ground, displaying Captain Marvel’s colours and logo (and showing that it works like no pager we’ve ever heard of).

Brie Larson’s Carol Danvers – aka Captain Marvel – has been rumoured to have a major role in Avengers 4 (following shortly after her debut in her self-titled solo film). How exactly she’ll be able to help defeat Thanos remains subject to intense speculation.

3. Ant-Man to the rescue

The third string to Strange’s anti-Thanos bow is something we’ve touched upon before, and it doesn’t even happen within Infinity War itself.

The comedic Ant-Man and The Wasp tells a story that is largely separate from the dark events of Infinity War, but the mid-credits scene linked back to Thanos’ snap, showing Ant-Man (Paul Rudd) trapped in the microscopic Quantum Realm after his allies were erased.

Ant-Man had been warned by the original Wasp, Janet van Dyne (Michelle Pfeiffer) not to fall into a ‘time vortex’. No further explanation was offered, but it has been theorised that he will be able to use the phenomenon to kick-start Avengers 4‘s rumoured time travel storyline.

With all those things in place, this might give our heroes that one-in-several-million chance to undo all the damage that Thanos has done. And who knows, there could be other factors that had to happen that we have no idea about yet.

Interestingly, the idea of playing for time in a similar fashion relates to a story in the comics. Jonathan Hickman is a writer whose Infinity comic was a big inspiration on the Infinity War movie, and the storyline in question was part of his earlier Fantastic Four run.

At the climax of that story, Earth is faced with several seemingly unstoppable threats all at the same time. Valeria Richards (the genius daughter of the Invisible Woman and Mister Fantastic) is forced to secretly play for time – with the aid of some knowledge from the future – in order to buy a crucial 27 minutes that will ensure that the planet isn’t pulverised into dust.