Home » TV & Movies » 'Below Deck Med': Bugsy Drake Gets Reporter to Blush When She Asks Him to Be Her Valentine

Christine “Bugsy” Drake’s tablescapes weren’t the only red thing during a recent table decor expo. The Below Deck Mediterranean star asked a local reporter to be her Valentine and his response was to turn bright red, giggle, and accept her offer.

Drake attended the Washington D.C. Home and Remodeling Show to offer her version of a “Galentine’s Day” tablescape. But the best moment from the local news segment about the table decor came when she asked local reporter Matthew Cappucci from Good Day DC to be her Valentine shortly after he said he was spending Valentine’s Day at the Waffle House.

Cappucci, who is a meteorologist at Fox5DC covered the event but ended up becoming part of the story. “If I had Valentine’s Day plans this would very much help my case,” he remarked about her tablescape during his segment. “In the meantime, well, I’ll probably go down to the Waffle House or something.” 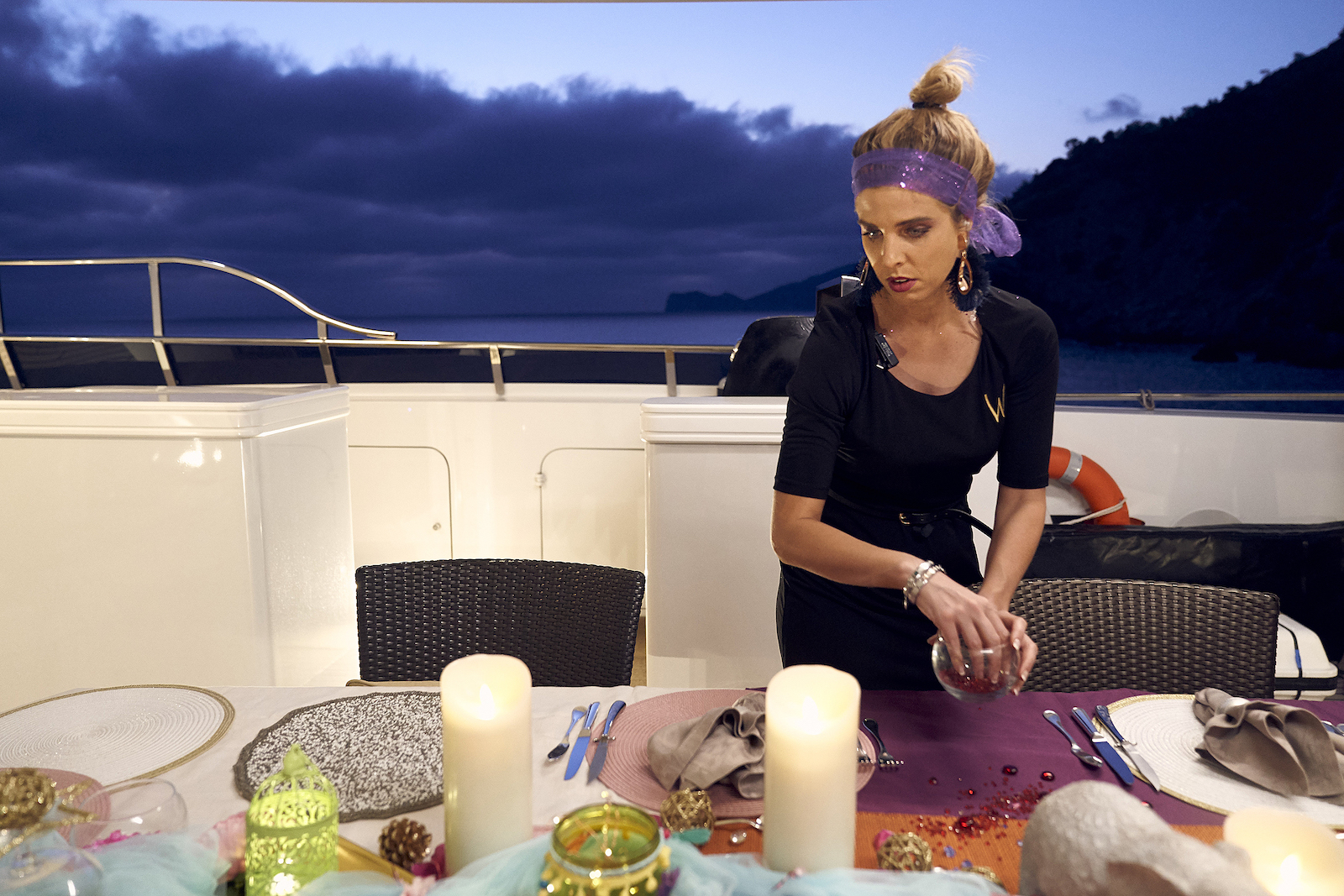 He then tried to steer the conversation back to tables, but Drake leaned into his comment. “Before we go, Matt, I would like to know if you will be my Valentine,” she asked Cappucci.

Cappucci nervously laughed and stammered, “Well, most certainly! Of course!” He added with his voice cracking, “I look forward to it.”

“And you can set the table and I’ll cook a good meal,” he added as they both looked a little awkward standing next to the table. “Brilliant,” Drake added. “I’m excited about that.”

The newsroom jokes ‘You can stand closer to her Matt!’

Drake continued to nervously laugh and shared with viewers how they can attend the Home and Remodeling Show. But the newsroom wasn’t going to let him off the hook. “Matt! Don’t get flustered,” the on-air reporters are heard joking in the background.

Another reporter added, “I think he’s as red as her sweater! You’re all flustered!”

Cappucci’s awkwardness only increased. And he said, “I’m all red under the makeup. You can’t see it but believe me, I’m definitely blushing.”

“Oh we can see it, Matthew,” the on-air reporter is heard agreeing. “Don’t worry. We can see it. You can stand closer to her, Matt!” Then the reporters tried to play cupid, commenting about how “cute” Drake and Cappucci would be together.

Cappucci finally stands next to Drake and puts his arm around her. That’s when Drake came in for a big hug and the newsroom went wild. “Get your man, yes!”

Drake and Cappucci continued to have fun with the moment on Twitter. The station got in on the joke too. “When BugsyDrake asks you to be her Valentine…the correct answer is YES!!!!,” Fox5DC tweeted along with the video.

Cappucci also tweeted, “Working at @fox5dc has definitely taught me to think on my feet.” And Drake replied, “Thank you for accepting to be my valentine!”

Drake retweeted a sweet reply from a fan. “Welcome To Washington DC Bugsy! You got a good one in @MatthewCappucci.”

Elliott and Sadie Wright reveal they're expecting their first baby together

Trump slams Gen. Mark Milley as a 'complete nutjob' who endangered America after Biden defends his secret calls to China